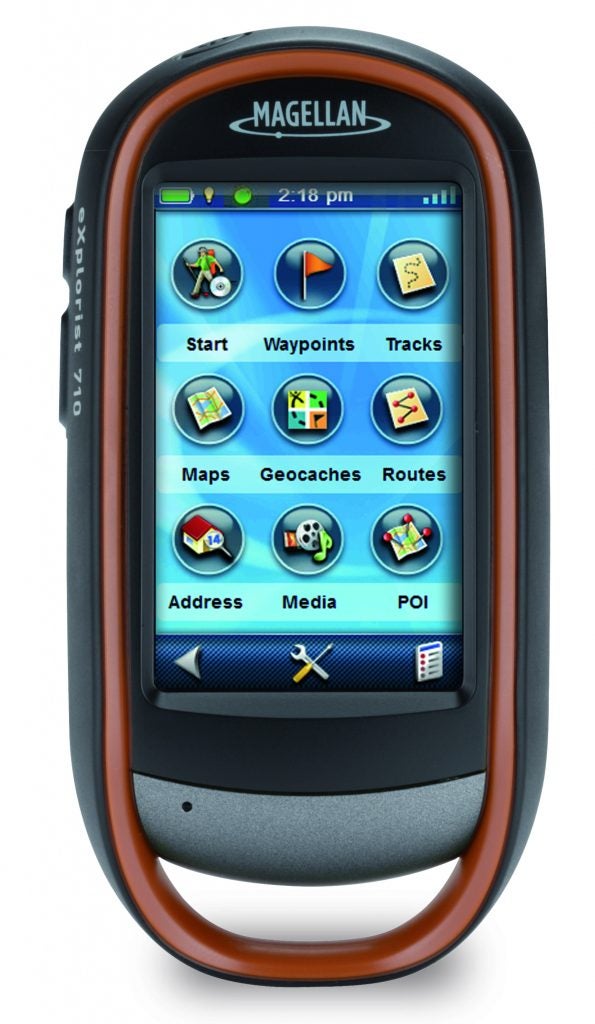 A few years ago, if you wanted a hiking GPS the two main brands to consider were Garmin and Magellan. Then Magellan exited the UK market, leaving Garmin as your main option. But as we’ve already reported, Magellan is back, with a full portfolio of products, including the Geocaching-oriented eXplorist GC and iPhone-ensconcing ToughCase. Whilst these are rather niche products, the eXplorist 710 on review here is a much more mainstream hiking GPS. In fact, it’s the flagship of Magellan’s eXplorist range, with a few unique tricks up its sleeve.

The most unique features of all aren’t directly hiking GPS functions, however, although they can enhance your experience considerably. Like Garmin’s excellent Oregon 550t, the 710 incorporates a 3.2Mpixel camera. Although Garmin has recently gone beyond this with its Montana 650t, which offers a 5Mpixel camera, neither are quite up with what even current smartphones such as the iPhone 4S are now sporting. But while you will still want to bring a proper digital camera for serious photography, the pictures will be good enough for recording landmarks and discoveries for navigational purposes, and the 710 has some more capabilities here as well.

It can also shoot video, although only at a paltry 320 x 240, and record audio voice memos. Once these multimedia files have been captured, they can be assigned to waypoints, Geocaches, tracks or routes. So you can use these three multimedia functions to augment your navigation with audiovisual reminders, which will be listed along with the other details of your waypoints, Geocaches, tracks or routes. The camera function even has its own physical button, which calls up the app and is then used to trigger the shutter, although the other options can only be accessed via the menu.

Although its multimedia capabilities are the headline act, the 710 is also packed with high-end hiking features. Naturally, the device itself is ruggedised, with waterproofing to IPX7 standard. This means it can withstand submersion in up to 1m of water for up to 30 minutes. So you can accidentally drop it in a puddle or leave it in the rain without fear of it coming a cropper. It achieves this with rubberised buttons and a rubber flap over the USB 2 port, plus a back cover which locks firmly in place with a screwing catch. There’s a connection on the back for attaching a karabiner or windscreen mount, although none of these are included in the box, unlike Garmin’s Oregon 550t, which includes a karabiner.

The menu presents a wealth of features, all readily accessible via the 3in touchscreen. A simple tap onscreen calls up four icons in the corners of the display, which lead to different sections. The bottom right icon, most easily reached with your thumb (assuming you are right handed), is where you can access the most frequently used functions like adding waypoints and searching nearby for waypoints, Geocaches, POIs, tracks and routes. You can search all of these at once, or just one category.

The POI section includes roads, so you can navigate to any that are nearby – handy if you just need to get out of the woods. The 710 also comes preloaded with popular Geocaches, and a month’s trial of the premium subscription at Geocaching.com. So it’s ready to go with this increasingly popular outdoor hobby. This is also where you can pause the tracking function, save the current track, or backtrack. By default the 710’s tracking function is always enabled. You can also access routing options, cancel your route, and view various parameters about your route or track.

Almost as easy to reach is the top right icon, which leads to the favourites. There are 12 of these, nine of which are generic. But the top three are earmarked for Home, Campsite and Car, with appropriate icons depicting each. Press any of these when they haven’t been defined, and you will be prompted to use the current location, which is nicely streamlined, and editing the slots afterwards is not difficult either.

The other nine slots are more general purpose, and can actually be assigned duties other than just calling up a preset location. You can configure these to enact a search for waypints, geocaches or POIs, or a number of useful functions, such as trip stats or hunting and fishing information, although our particular favourite is the fullscreen compass. All of these functions can be found via the full menu, but having your favourites just three screen taps away is massively useful.

If you do need the main menu, the button at the bottom left will take you there. This gives you access to all the functions associated with waypoints, tracks, Geocaches, POIs and routes. You can also search for an address either by drilling down from city to street, or you can enter a postcode, although not the full set of digits, just the first group and the number from the second group. So you can’t pinpoint an address location very accurately, just a general area. It’s also rather a painful experience to enter alphanumeric information, as the keyboard is split across four screens. If you want to navigate to map coordinates, though, you don’t use the Address system, instead adding a waypoint. This system is a little unintuitive, as you have to click through the statistics for the current location before you’re given the option to enter numeric map coordinates.

The full menu is also where you can access the multimedia functions we have already described, and also toggle the various maps you have installed. Out of the box, the 710 comes with Magellan’s Summit City Series detailed map of Europe, including a POI database, plus a Navteq and Etopo world topographic map. However, you can install extra maps from the Navonics series, and the device has a healthy 8GB of memory built in for this, with 4GB free initially. If this isn’t enough, there’s a MicroSD card slot lurking beneath the batteries for expansion. Batteries, incidentally, come in the form of two AA cells, which Magellan claims will last 16 hours of regular use. This is about the same as competing devices.

The final menu calls up the Dashboard, which by default hosts a comprehensive range of trip and location information, including a small compass. However, you can configure this screen with a eight other displays, including conventional and strip compass or just numeric data. The 710 has a triple-axis digital compass, so will display the correct directional information no matter what its orientation. It also has a barometric altimeter, so barometer and altimeter displays are available, too. It’s also worth noting that the screen is quite responsive and easier to use than some hiking GPS devices we’ve used. The surface is a little shiny, so you have to avoid reflected sunlight, but the display is also quite bright so generally visible in outdoor daylight.

Verdict
Aside from the multimedia functions, the Magellan eXplorist 710 is essentially a very comprehensively featured albeit not groundbreaking hiking GPS. The near-£400 price may seem a lot, but it compares quite favourably with other devices offering a similar range of features, such as Garmin’s Oregon 550t and Montana 650t. So whilst this is still a lot to pay for a hiking GPS, it’s relatively good value for the specification, and if you’re a dedicated outdoor traveller the Magellan eXplorist 710 gives you a lot for your money.