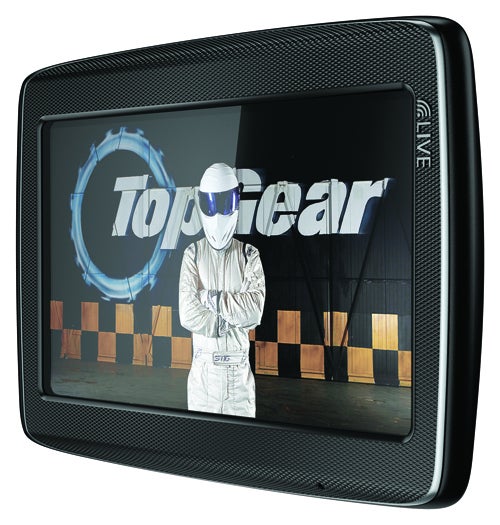 Top Gear is without question the most popular TV car show in the UK, and some would say even in the world. On the other hand, TomTom is the market-leading brand of in-car sat-nav devices in the UK and Europe. So it seems almost appropriate that the two would come together at some point. Well, now they have, in the shape of the TomTom Top Gear Edition, which takes a mid-range TomTom device and adds Top Gear touches, mostly for added entertainment.

You would be forgiven for being uncertain which TomTom device this is by looking at the box, however. The packaging maxes out on the Stig and Top Gear branding, but hides the TomTom model number being used as host rather effectively. In fact, the device in question is a TomTom GO LIVE 820, which sits in the middle of the range, packaging some of the key features of the premium models in a chassis derived from the budget end of TomTom’s selection. But even though the precise underlying model has been buried in the packaging, one thing’s for certain – it’s called the Top Gear Edition.

As you might have guessed, this essentially means a hefty helping of Jeremy Clarkson’s voice has been added. If you find him woefully irritating, you should stop reading now, as this device is not for you. James May and “The Hamster” are not heavily involved. Assuming you do appreciate Mr Clarkson’s brand of humour, his verbal commands and comments can be genuinely funny, at least the first few times you hear them. We particularly like his quip about toll charges being “paying for a road you’ve already paid for through your taxes”, and his admonition that you’ve “cocked up” when a U-turn is required.

However, Clarkson mannerisms have been added liberally, and the regular “Umms” and “Hang-on, hang-ons” before every turning can get a bit wearing after a while. We also found particularly bizarre the way he said “then” after some directions, even when there was no secondary direction following the first. So we suspect there will be a time when the amusement of Clarkson-isms fades, and then you have the option of switching to “Stig mode”. This is actually just a silent voice profile, although we feel it would have been most accurate if it randomly played Abba or Vuvezelas, rather than nothing at all.

Although the Clarkson voice commands are the main feature, there are a couple more Top Gear additions. You get five custom car icons inspired by some of the memorable “challenges” from the TV show, including the airship James May famously flew across an active airfield “by accident”. There’s also a special Top Gear points of interest category, which almost exclusively consists of popular tracks such as Bedford Aerodrome’s GT circuit and Santa Pod, plus Top Gear’s own circuit. These will be useful if you’re a fully paid up petrolhead who likes to randomly visit the odd track on the way home.

Beyond the Top Gear topping, this is a 4.3in widescreen device, rather than the 5in format which is becoming increasingly popular. It also sports an integrated mount, rather than the clever magnetic system now used by TomTom’s top models, or even the one-gesture system found in previous premium ranges. Instead, the mount is permanently attached to the device, and simply folds in when not in use. This makes the Top Gear Edition easier to use with and transport between multiple cars. But it also makes screen attachement a little more fiddly, although if you don’t like leaving your mount in your car for security reasons there’s not much difference. The car power cable now also doubles as the USB cable for installing software updates, although this now appears to be standard across TomTom’s range.

So the Top Gear Edition’s physical attributes are decidly value-oriented. But some of its capabilities are much more high-end. In particular, this is a TomTom LIVE device. So it comes with a selection of mobile data-enabled services, and a year’s subscription provided out of the box, after which you will have to pay £47.50 a year to maintain the connection. Although TomTom’s LIVE services, despite being the first on the market, have now been surpassed by the competition in terms of broadness of features, they still have arguably the most important key feature of all – HD Traffic.

We’ve banged on about the efficacy of HD Traffic at great length in the past, and even written a feature about it. But this is because it was a revelation when it was launched, and it appears to have improved over time, too. Amazingly, despite HD Traffic being around for three years, its abilities have not been surpassed. Other than this you get the Google Local Search online points of interest system, plus dynamic weather reports, and the ability to send notification of traffic camera locations on the fly.

Other than this, the Top Gear Edition has a complete set of basic features. You can navigate to a full UK post code, and plan multi-waypoint journeys. There’s no keyword search across the address database, but this is possible with the points of interest catalogue. Journey calculation uses TomTom’s IQ Routes system, so takes into account real historic road speeds rather than using nominal speed values, so estimated time of arrival is more accurate than traditional systems. Essentially, this is a very capable mid-range sat-nav which will get you from A to B as well or better than most devices on the market.

The Top Gear Edition TomTom was always meant to be a limited edition, through Halfords only, so reports that the BBC was pulling the plug seem to be a little overstated. The company was only going to make a certain number, and allegedly have already done so and won’t be withdrawing anything from the shelves at te behest of the BBC. When they sell out, they’re gone. Or, at least, that’s what we’ve been told, and it could just be a publicity stunt. Either way, there will be a finite stock of these devices, of indeterminate size, and it will cost you around £30 for the extra features and exclusivity compared to a vanilla GO LIVE 820. The latter can be found discounted online, whereas the Top Gear Edition only sells at Halfords at TomTom’s RRP. Whether you think this is worth it depends on how much you, or whoever you’re buying for, likes Top Gear, and in particular Jeremy Clarkson’s brand of humour. If you do, then this is great fun, at least for a short while. And after that, you’ve still got a corking sat-nav.