iPhone 13 hands on: Bigger upgrades than you might think 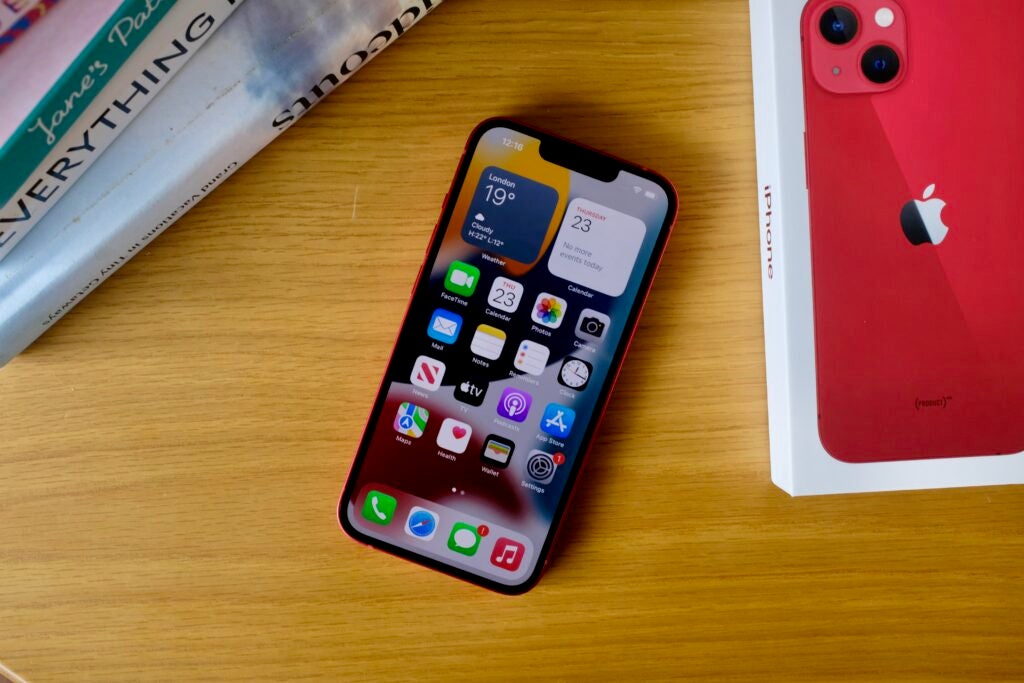 The iPhone 13 is here, bringing with it a number of notable updates over the now much more affordable iPhone 12.

On paper, the iPhone 13 might seem more like an iPhone 12S: a moderate year-on-year upgrade that tightens the screws, tweaks the internals and focuses on one notable upgrade.

After a bit of time spent using the phone though, it does feel like a meaningful release. Probably not for those who invested last year in the iPhone 12, but for those who have been hanging onto an iPhone X or older.

Apple went big with the iPhone 12 redesign, ridding the phone of its curved sides and giving it a refresh that harked back to the iconic iPhone 4 and 5.

With such a big change in the iPhone’s look happening a mere 12 months ago, this update was always going to be visually iterative. There are some design changes, but they’re all fairly small.

The notch is 20% smaller, which is welcome but still more annoying than most of the Android competition, which has switched to hole-punch style cut outs for their front cameras. It’s also slightly heavier and thicker to account for the bigger battery and upgraded camera module. Unless you hold the iPhone 12 and iPhone 13 next to each other, you won’t notice this difference though, based on my testing.

Finally we have a smaller notch

There are a couple of new colour options too. A Starlight hue adds a hint of gold to a silver body, while the Product(RED) model I have here is a deeper shade than before. Midnight is a very dark blue that looks almost black, while there’s a blue and light pink shade too.

All the upgrades Apple added with the iPhone 12 are here as well, including the likes of Ceramic Shield and the IP68 water resistance rating.

It’s the iPhone 13 Pro model that’s getting all the big screen upgrades this year and I do think it’s a shame the iPhone 13 is sticking with the standard 60Hz 6.1-inch panel. ProMotion, which adds an adaptive refresh rate that can ramp up to 120Hz and down to 10Hz, is one of the headline additions to both Pro models and I have to say it’s my favourite iPhone upgrade in years. A faster display isn’t really one of those things you wish for if you haven’t experienced it before, but once you’ve used it it’s hard to switch back to a 60Hz panel. Whether you’re just scrolling Instagram or playing supported games, ProMotion makes a real difference.

Judging by Apple’s past releases, I would expect ProMotion to trickle down to the iPhone 14 models next year.

Still, it’s a great OLED display. The smaller notch is nice when watching videos while the extra hit of brightness (a reported 800 nits) is especially noticeable outside on sunny days. These aren’t updates worthy of an upgrade alone, but you will notice them if you’re coming from an older iPhone.

The biggest upgrades for the iPhone 13 come in the duo of cameras on the back. These inherit a lot of the tech introduced with the iPhone 12 Pro Max, including in-body stabilisation. Apple claims the new, bigger wide sensor captures 47% more light while the ultra wide is built for performing better in low light. There’s still no optical zoom here, so any zooming is done via digital means.

The cameras themselves are much larger, so they’re rejigged slightly in terms of positioning. You’ll notice the sheer size of the cameras if you pop the iPhone 13 next to the iPhone 12.

Physical tech aside, Smart HDR 4 can now recognise four different people in a scene and there’s a new Cinematic mode that is pretty much a portrait mode for video, based on my early testing. It takes this idea further by adding in focus racking, allowing the camera to switch focus points, for example, if a face turns away.

I haven’t had these phones long enough yet to really push the cameras, but my initial impressions are good – even if the Apple camera app is starting to feel a little bogged down by all the various options.

Where the larger sensors are instantly noticeable is in lower-light, with the phone switching to the dedicated night mode less and managing far more just with the sensor.

I was also quite impressed with my first play about with Cinematic mode, even though I doubt I will end up using it on a consistent basis. The blur effect is far from perfect, but it’s a lot better than attempts from Samsung and the focus racking works very well. I lined up a number of objects and the camera changed focus smoothly as I moved them away.

Where I would have liked to see some more upgrades to the camera is around the front. The 12MP selfie camera has been the same for generations now and it could really do with a little more attention.

Battery life could be one of the biggest upgrades to these iPhone 13s, especially the Mini. For the iPhone 13, Apple is claiming two hours extra of juice per charge which will hopefully translate into a phone that can last even the busiest of days.

I’ll of course need to do full testing to see what Apple’s claim actually mean and you’ll be able to read that all in the full review.

You’ll still need to provide your own plug (though a cable does come in the very slim box) or pick up either a MagSafe charger or another Qi-enabled pad.

Apple might have switched to USB-C across its laptops and the majority of iPads, but it is still sticking to Lightning for the iPhone. If you have a load of iPhone accessories this is great, but USB-C is just so much faster for both data transfer and charging that it does feel like a miss.

This improvement in battery life comes from slightly bigger cells, plus a more efficient A15 Bionic chipset.

What’s in the box?

The A15 Bionic has a four core CPU, four core GPU and a 16 core neural engine for AI tasks. Interestingly, Apple has kitted the Pro models out with a five core GPU – though it’s not immediately clear what the benefits are.

I don’t think you’ll really notice the extra power of the A15 Bionic immediately if you’re coming from an iPhone 12, iPhone 11 or probably even the XS. However it is important as it powers lots of the new features, like the intensive Cinematic mode.

There’s a wider selection of 5G bands this year thanks to a new 5G modem and the base storage has doubled to 128GB. Considering the price of the phone has actually gone down in the UK, it’s nice to see that 64GB option finally laid to rest.

The iPhone 13 will be a strong upgrade for anyone who decided against switching phones for a number of years.

The camera is looking very much like it’ll be the best at this price point while the display is now much easier to read in bright sunlight. It could be the improvements to the battery life that stand out most though.

Which iPhone 13 is right for you? All the new models compared