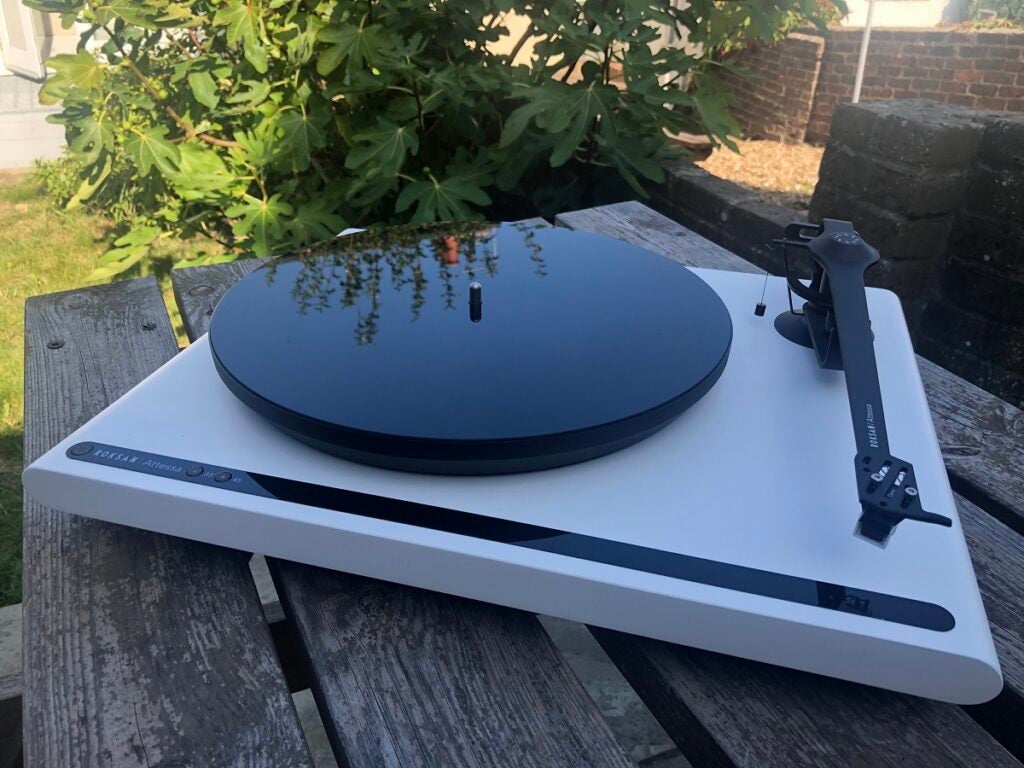 Roksan may have (slightly) democratised its turntable expertise to a new and (slightly) more attainable price, but it hasn’t scrimped on any of its long-established virtues.

Don’t call it a comeback – Roksan never really went away. But with its new ‘Attessa’ range of electronics, the company is bringing a little of its high-end cachet and sparkle down to a price point that could almost be considered ‘mainstream’.

Of course, as far as this Attessa Turntable is concerned, the ‘mainstream’ is already quite well stocked with deeply impressive record players from deeply credible brands. No one’s doubting Roksan’s credibility, of course – but does it have what it takes to ruffle the feathers of the established market leaders?

The Roksan Attessa Turntable is available from the end of September 2021, and in the UK it can be yours for £995. In the US it will sell for around $1495, while Australian Roksan-fanciers should expect to pay AU$1995 or so.

It almost goes without saying that these prices bring the Attessa Turntable into direct competition with some extremely well-regarded rival designs from brands with just as much heritage and turntable cachet as Roksan.

Rega, for example, has an impeccable reputation, and in its Planar 6 turntable, a very similarly priced alternative. Clearaudio, too, with its Concept deck, is ready to delight both the audiophile and interior decorator in your life – even if they’re both the same person.

Roksan’s very first product was a turntable, and since it launched the Xerxes back in 1985, very little has changed in terms of the design of record players.

And that’s hardly surprising, because unless you want to get into a bit of wilful design frippery like wall-hanging record players (yes, they exist and no, they’re not worth considering), then the form of a turntable is entirely dictated by its function.

So while the Attessa Turntable is a gratifyingly tidy at H105 x W432 x D353mm (not including the dust cover), it’s still your basic ‘circle on a rectangle’ record player. The rounded-off sides are about the only thing here that could be considered a design ‘flourish’. Unless you count the vaguely stylised ‘power’ and ‘speed’ controls on bottom/left of the plinth…

There’s a fair bit more to discuss here than in the Design section of this review – it’s apparent Roksan has pulled out any number of specification stops where the Attessa Turntable is concerned.

Most obvious at first glance is the complex and dramatic-looking tonearm arrangement. This is an all-new computer-aided design, and its composite construction includes integrated tracking and anti-skate adjustment. Unifying functions in this way isn’t easy – the glass jewel pivot alone speaks of many hours of research and development.

The plinth is of a single, isolated piece, and it sits on isolation feet developed from the current Xerxes turntable. All the critical components are arranged here, and there doesn’t seem to have been much compromise where they’re concerned, either.

The bearing assembly – spindle, ball and housing – is made of steel and brass. The motor and speed selector – the Attessa Turntable will operate at 33.3 or 45rpm – are digitally controlled and accurate to a few micro-seconds. The platter is 10mm of high-mass glass with an anodised aluminium edge. And that tonearm is an aluminium/ABS combination and comes with a Roksan Dana cartridge already attached.

On the back of the plinth there are a pair of stereo RCA outputs (Roksan thoughtfully supplies a pair of RCA interconnects that are a cut or two above the bog-standard), and a switch for the integrated moving-magnet phono stage.

Incorporating sufficient amplification to make the Attessa Turntable compatible with pretty much any system is a fine idea, and being able to switch it on or off means those with systems that already support turntables will be able to compare and contrast the relative qualities of amplification. Which is nice.

Most of the legwork of setup is done before you even take your Attessa Turntable from its packaging, and the remaining stuff is achievable in just a few minutes – Roksan has put a helpful video on its YouTube channel, too. So, it shouldn’t be long before you’re slipping on that first LP and pinning your ears back.

And it won’t be long before you realise the Roksan Attessa Turntable makes good on all admirable virtues of the vinyl format. A heavyweight reissue of Belle and Sebastian’s If You’re Feeling Sinister sounds full, warm (but not lush or overheated) and is presented as a unified, flawlessly integrated whole. The indie-pop tempos and rhythms sound natural and expressive, and there’s just about enough drive and attack to make the broad dynamic peaks and troughs of the recording obvious.

There’s a low-key meticulousness to the Roksan’s tonality that can, on first acquaintance, be confused with a lack of engagement – but that emphatically isn’t the case. By the time you get to the end of side one, it’s obvious the Attessa Turntable is delivering the complete picture; but it’s smooth and even from the bottom of the frequency range to the top.

Nothing is overstated, nothing is underplayed… from the hefty, informative and well-controlled low frequencies to the politely crisp and equally information-packed top-end, the Roksan exhibits an enjoyable commonality of tone.

However, it’s the mid-range that’s the single most enjoyable aspect of the Attessa Turntable’s performance. Detail both broad and fine is available in spades, and there’s a directness and immediacy about the way voices are delivered that makes the Roksan among the more eloquent and convincing turntables £1000 can buy.

It isn’t perfect, of course – after all, very few products are. And switching to the unthreatening, but insistent, eponymous debut album by Kiasmos reveals a slight reticence in the Roksan’s sound. These aren’t the most punishing beats around by any means, but they nevertheless demand a little more positivity and slam than the Attessa Turntable seems comfortable mustering.

Mind you, in every other respect, the Roksan is just as enjoyable and believable a listen as ever. Although the rhythms are slightly underplayed where simple drive is concerned, they’re still natural and unforced. And the way this deck integrates processed, mechanised and organic sounds into a single, unified performance never fails to impress. It expresses the notional scale of the recording well and has insight to spare.

The integrated phono stage is well worth it, too. As well as making the Attessa Turntable completely system-agnostic, it stands up well against any number of alternative designs included in appropriately priced integrated amplifiers.

In fact, I had to crack open one of our favourite stand-alone phono stages – the venerable Leema Elements – before I was able to make a properly decisive improvement on the Attessa Turntable’s sound. And the last time I checked, a Leema Elements phono stage will set you back £449.

You enjoy the archetypal vinyl sound Roksan has invested a great deal of time and money in developing a record player that really plays to the vinyl format’s strengths.

You’re after out-and-out attack It isn’t that the Roksan is uncomfortable with punchier beats, it’s just that it would rather not get too deeply involved.

We test every turntable we review thoroughly over an extended period of time. We use industry standard tests to compare features properly. We’ll always tell you what we find. We never, ever, accept money to review a product.

Does the Roksan Attessa have a phono stage?

Yes, it does, and it is a switchable moving magnet (MM) phono stage.

When is the Roksan Attessa turntable due to come out?

Currently, it’s due to be available for purchase October 2021

Does the Roksan Attessa come with a cartridge?

Yes, the Dana cartridge is fitted as standard