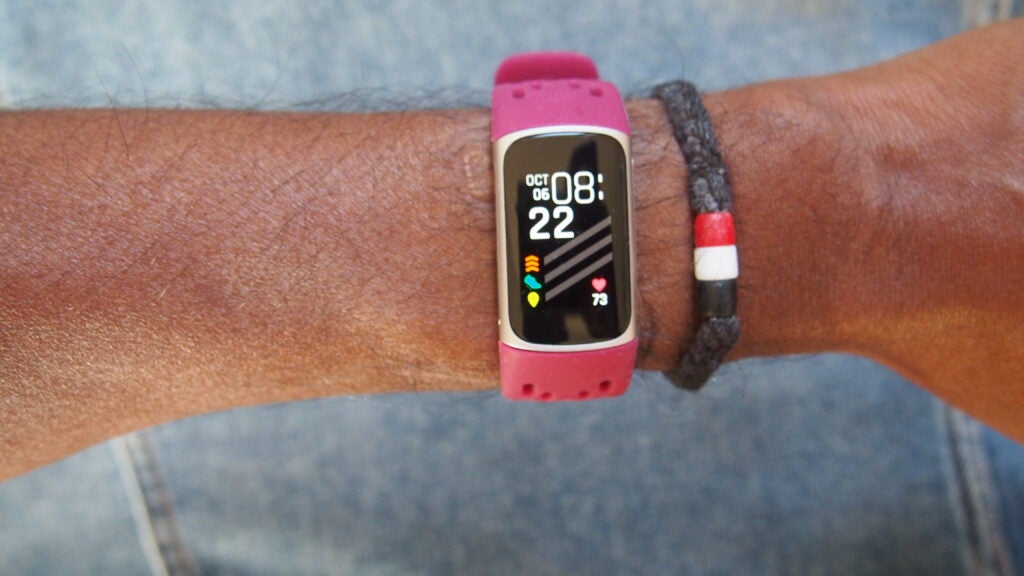 The Fitbit Charge 5 makes an important upgrade by adding a colour screen – something Fitbit should have brought to the Charge a long time ago. With an ECG sensor and more stress insights available, too, the Charge 5 is a much better mix of fitness and health tracker. It’s still lacking in some areas, notably when it comes to tracking exercise, while some key features aren’t yet live. Overall, though, it’s a solid tracker with room for improvement.


Built-in GPSGreat for running without your phone

The Fitbit Charge 5 is the health and fitness tracker successor to the Charge 4, which launched back in March 2020 right in the thick of the world going into lockdown.

Now that we’re starting to enjoy a bit more freedom, Fitbit has sought to make its flagship tracker better at monitoring your health, exercise and stress, which has led to a bit of a price hike on its predecessor.

It’s inheriting features from Fitbit’s Sense smartwatch, including an ECG sensor, and is righting one of the biggest hardware wrongs of the Charge 4, to make it a far more appealing tracker to strap on. The question is whether the Fitbit Charge 5 packs in the right features to make it a must-have device.

The Charge 5 remains the biggest of Fitbit’s trackers. As such, you’re still getting a band-style design that sits large on the wrist compared to its Luxe and Inspire 2 trackers.

A removable silicone band with a watch-style buckle ensures the Charge 5 stays put on your wrist, holding an aluminium case in place, which is an upgrade on the plastic resin unit of the Charge 4. Something that hasn’t changed over the previous model is the water resistance rating, which means the Charge 5 is safe to be submerged in up to 50 metres of water.

Fitbit doesn’t include any physical buttons with this device, dropping the haptic unit built into the Charge 4’s case. So it’s all over to that touchscreen display, which moves from the greyscale OLED panel on the Charge 4 to a significantly brighter, more vibrant, colour AMOLED display. Not surprisingly, it’s brighter than the previous Charge screen – and an upgrade that needed to be made. Particularly since the Charge 4 display struggled so much in bright sunlight.

That’s not to say that the screen is perfect, however. While there is an always-on display mode, it can sometimes take a couple of taps to take the panel from its dormant yet visible state to fully up. If the always-on mode is disabled, the raise-to-wake support isn’t always the most responsive. Swiping across screens isn’t buttery smooth here, either – so there’s definitely room for improvement. Nevertheless, the good definitely outweighs the bad, and it’s about time Fitbit put this type of display on its flagship tracker.

The company will no doubt believe its devices are unisex, so feels the Charge 5 is suitable for both men and women compared to a model such as the Luxe. It’s been comfortable to wear, the new screen is definitely welcome, and the ability to easily swap out straps for new ones quickly is a major plus here, too.

Like all Fitbits, you get a handful of tracking staples. This is a device you can turn to for counting daily steps and pushing out vibrating nudges when you haven’t been moving enough.

It automatically monitors sleep, generating sleep scores and breaking down sleep stages to better understand the quality of your slumber. However, with the Charge 5, Fitbit is bringing in some notable health features that debuted on its Sense health-centric smartwatch: it wants to help users keep an eye on their stress levels.

Let’s start with the basics, though. In terms of sensors, there’s a pretty standard three-axis accelerometer to track movement and enable sleep monitoring. Built-in GPS and GLONASS help to accurately map and track outdoor exercise, plus there’s an optical heart rate monitor on board to continuously monitor heart rate and measure effort levels during exercise.

Red and infrared sensors enable SpO2 monitoring during sleep, and there’s a device skin temperature sensor, too, matching what’s available on the Charge 4.

Where the Charge 5 makes improvements over the Charge 4 is with the inclusion of an ECG sensor, bringing in its EDA Scan app, which also features on its Sense watch. This means you have the ability to closely monitor how your body is responding to stress. While the EDA Scan app is available to use, Fitbit hasn’t enabled the ECG sensor just yet, which can be used to help detect signs associated with the heart condition atrial fibrillation.

In terms of those tracking basics, we found that daily step counts were about 500-1,000 steps off a Garmin fitness tracker. You can view stats on supported watch faces, of which you can find more inside the companion Fitbit app. You can also swipe up from that main watch screen to get a version of the Today screen used on Fitbit’s smartwatches. That’s where you can view figures for heart rate, distance covered, latest sleep data and more.

When it’s time to go to bed, first and foremost, the Charge 5 stays put on your wrist; it doesn’t feel like a nuisance to wear to track sleep. I found the data for sleep duration generally pretty reliable and the sleep scores were useful, too. You can view advanced sleep analytics here, including sleeping heart rate, but you’ll need to be signed up to Fitbit’s Premium subscription service to see those added insights.

If information regarding your resting heart rate, and what that data denotes about your current state of fitness, is a priority for you, then you’ll be happy to learn the Charge 5 performs well on this front too. I wore it alongside the Garmin Enduro sports watch, which I’ve come to rely on for reliable continuous heart rate monitoring, and on most occasions the real-time data and resting data from the two devices generally matched up for me.

It was largely a good story on the exercise front, too, where data concurred or was 1-2BPM off maximum heart rate and average heart rate readings delivered by a Garmin HRM-Pro chest strap monitor.

Sticking to all things exercise-related, the Fitbit still offers 20 exercise modes including running (indoors and outdoors), cycling and interval workouts, plus you can find more modes in the Fitbit app. Built-in GPS was a headline addition on the Charge 4, and the feature makes it onto the Charge 5, although it doesn’t feel as if there have been huge improvements on the accuracy front. I still found that it took a while to lock onto a GPS signal, and distance tracking generally came up short against a Garmin running watch.

Alongside existing features such as Active Zone Minutes, seeing your cardio fitness level and viewing workout intensity maps for outdoor workouts, Fitbit is introducing a new Daily Readiness Score. This is designed to provide information of your best time to exercise. I’d like to let you know how it worked, but the feature currently isn’t available – and is another one that will be locked behind Fitbit Premium.

The Charge 5 delivers far more than the Charge 4 if you’re someone for whom monitoring stress is a priority. Stress Management Scores and access to mindfulness features such as meditations for stress and sleep remain. But the addition of the EDA Scan app, which requires placing your fingers into sensors built into the case for a few minutes, connects those features that focus on getting you calmer and more relaxed. Even though taking those EDA scans for a couple of minutes can feel like a bit of a pain, it’s nice to see a link with the other mindfulness features Fitbit offers here.

When you’re not tracking, the Charge 5 can play smartwatch – but, not surprisingly, it’s rather restricted by the screen estate it has available to do a perfect job.

You can view notifications, but these appear in a separate notifications screen that’s better suited to displaying short messages than making you scroll through longer ones. If you have an Android phone paired to this device, you do have the option to respond to some – but not all notifications. You also get access to Fitbit Pay, but you lose the Spotify music controls that featured on the Charge 4.

Up to seven days battery lifeCharges 0-100% in two hours

The Fitbit Charge 4 promised battery life of up to seven days, and the same promises are made for the Charge 5. When GPS is in regular use, that drops to five days while GPS battery life is up to five hours. Use the Charge 5 with the always-on display mode turned on, and you can expect up to three days of battery.

Based on our testing, it’s entirely possible to get seven days from the device, but it’s probably safe to say that it’s good for around a week, depending on the features you’re using on a regular basis. I found that daily drop-off was around 15-20%, and that was with notification support enabled, tracking heart rate and using indoor and outdoor sports tracking as well. That’s similar to what I experienced with the Fitbit Luxe, which also comes with a colour display.

When using the GPS for tracking outdoor activities, performance was mixed. A half-an-hour run saw battery drop by just 1%, but at times the drain could be more significant on runs of a similar duration. The stated five hours of GPS battery life seems to be accurate, however.

For charging, you’re dealing with a proprietary charging cradle; unlike Fitbit’s smartwatches, there’s no fast-charging support here. It will take a couple of hours to get the Charge 5 from 0-100% and back on your wrist.

If you want the most feature-packed Fitbit tracker: All of its features might not be available yet, but if you don’t want a Fitbit smartwatch then you need this Fitbit wearable on your wrist instead.

You don’t want to spend more to get the full experience: The Charge 5 introduces new features such as Daily Readiness Scores and some of the bigger health insights offered by Fitbit, but you’ll have to pay for Premium.

The Charge 5 remains Fitbit’s most feature-rich tracker, with feature additions such as ECG and a skin temperature sensor seemingly showing that both Google and Fitbit feel there’s still a place for wearables outside of smartwatches. However, the Charge 5 falls short of being the ultimate do-it-all device, particularly for sports tracking. But if you like the idea of getting the best of what Fitbit can do in a smaller form factor, then there’s still plenty to like here.

We thoroughly test every fitness tracker we review. We use industry standard testing to compare features properly and we use the watch as our main device over the review period. We’ll always tell you what we find and we never, ever, accept money to review a product.

Worn as our main tracker during the testing period

Best Smartwatch 2021: The top wearables for apps, health and more

Does the Charge 5 have GPS?

Yes, there is GPS support here

Does the Charge 5 work with iPhone?

Fitbit devices work with both iPhones and Android

Does the Charge 5 have Fitbit Pay?

There is NFC and support for Fitbit Pay