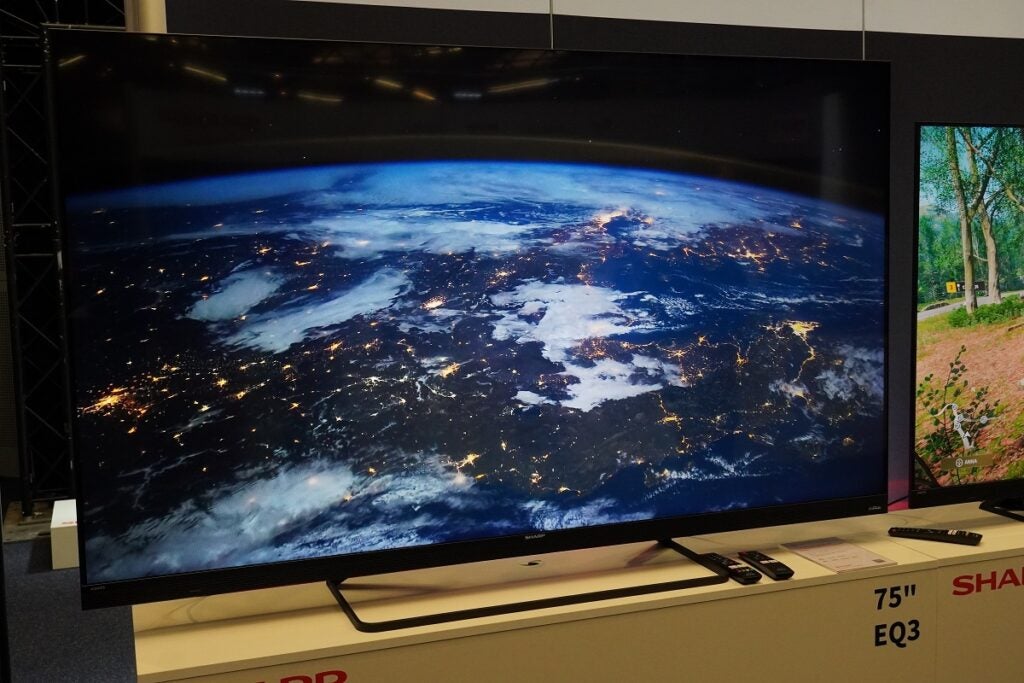 While not on sale until early 2022, Sharp’s EQ series is showing promising signs of being a competitive mid-range 4K set.

Not too brightNo local dimming

If there’s one message we took from the Sharp’s parade of products at its Xperience event, it’s that the Japanese electronics manufacturer is back, both as a TV and audio brand.

Following several years in the hinterlands, Sharp is looking to re-enter with a purpose – call it an awakening of a slumbering giant. Although its sights are focused on the affordable to mid-range market, challenging the likes of Hisense, Toshiba and TCL in the TV market.

Having announced new Android TVs earlier in 2021, Sharp took the covers off its latest models coming to the UK next year. There are certainly reasons to be optimistic about these upcoming sets.

The EQ-series of TVs will be available in the early part of 2022, following on from the DL and DN-series TV, which you can read more about here.

The Sharp EQ series looks, well, like a TV – but it avoids the cheap and plasticky construction that can plague TVs costing under £1000.

The actual bezel frame is slim and unobtrusive, providing plenty of acreage for the images on-screen. There’s a bulge around the lower part of the rear panel that, although not an uncommon sight, suggests the stand is the better option over wall-mounting, especially for those who like their TVs to lay flush against a wall.

Connections are housed around the back – four HDMI (60Hz) all with HDMI 2.1 certification, plus a triple HD tuner to receive TV programs via cable (DVB-C), antenna (DVB-T/T2) or satellite (DVB-S/S2). A micro-SD card reader (we don’t see that too often) and two USB ports are tucked away, too.

The central stand is minimalist in look but, perhaps, it’s what’s above it that’s of greatest interest. Sharp has partnered with Harman Kardon for the audio system that aims to be a bit more fluent than your usual TV speakers, and its neatly hidden behind a grilled partition. The overall aesthetic of the EQ series is one of neatness and good build quality, and that makes for a favourable first impression.

Android 11 is the OS of choice, with Sharp deciding against opting for the Google TV UI. In light of Android TV’s maturity, it’s a safe but logical call until the Google TV UI gains more traction.

There are those who aren’t fans of Android TV, but I can’t say I’ve ever felt it to be an issue. The Home screen is neatly ordered, with the Discover tab offering decent recommendations and the Play Store home to a huge number of apps that Android, with the likes of Netflix, Prime Video, Spotify, Deezer and Tidal, features. There’s no mention of Disney+ being a pre-installed app, however.

And with Sharp adding Freeview Play to its Android TVs in 2020, that brings onboard the UK catch-up and on-demand apps all in one place, too.

Sharp is also shipping two remotes with the EQ, one a more traditional effort, the other with fewer buttons and integrated voice control activation.

The first two are principally gaming features. ALLM automatically puts the TV into its lowest latency mode for its fastest performance when it detects a gaming console or application. VRR matches the frame rate of the console/PC to the TV to ensure a smooth, tear-free image. There’s no 4K/120Hz support for the latest game consoles.

Then there’s eARC (HDMI 1), which allows for pass-through of higher quality audio from the TV to a soundbar/sound system, with the Sharp EQ series supporting Dolby Atmos and, interestingly, DTS:X. If it’s ‘true’ DTS:X, and not post-processing, this is the first TV we’ve seen that natively supports the immersive DTS audio format.

Wi-Fi and Bluetooth are included (there’s no info on which versions, however). The EQ series also features a light sensor in the middle of the speaker grille at the bottom of the screen that adapts the picture changes if ambient light in a room changes (and manages power as a result).

There wasn’t much time to gauge the image quality of the Sharp EQ, since the same footage was being played over and over. But the screen specs were explained during the presentation, so here’s an idea of what to expect.

There’s Quantum Dot technology with brightness ranging from 350 to 500 nits, depending on the screen size.

VA panels are used for their better black levels and contrast. HDR support covers HDR10, HLG and Dolby Vision, and despite the inclusion of a light sensor there’s no Dolby Vision IQ (that’s probably a big ask, though).

Despite the brightness falling short of 1000 nits of coverage, the inclusion of DV should help the TV’s tone mapping with compatible content. This means that detail in the brightest and darkest parts of an image, along with luminance, are hopefully managed without compromising picture quality.

There’s no local dimming here, with the Sharp EQ opting for a direct-lit backlight. It remains to be seen what effect that could have, but black levels were solid, and backlight bleed and blooming barely noticeable on the demo content we saw.

Sharp’s AQUOS Motion interpolation technology is integrated for smoother motion, while colours were wide-ranging in their appearance and contrast solid in how it was meted out. We don’t have any sense of the series’ upscaling abilities but the 4K picture looked slick enough.

Atmos and DTS:XClear and crisp quality

We were given a few demonstrations of how the Sharp EQ Series TV handles audio. Playing a few songs – including DJ Khaled’s Wild Thoughts feat Rihanna – and the Harman Kardon system offered solid clarity and no distortion when driven at higher volumes.

High frequencies were clear and sharp, bass decent enough (for a TV), and dialogue was clear if a little cold in its handling as most TVs are wont to do.

New speaker drivers on the right

The Harman Kardon system is driven by 2 x 24W speakers, with a downward-firing woofer combined with a front-firing tweeter. This configuration differs from the TVs released earlier this year in that a) the tweeter isn’t downward firing, and b) the drivers themselves are bigger and have more volume to push more air to create a bigger sound.

There wasn’t an opportunity to sample the TV’s immersive performance with both Atmos and DTS:X (the EQ Series can also perform Virtual:X post processing too), so we’ll have to wait to hear how that works if we get our hands on a review sample.

If you’re in need of an affordable 4K TV Although the Sharp 55EQ3A isn’t out yet, if you have an old TV that’s in need of a replacement, then the number of features this model offers might suit those looking to make a step-up.

If you want a more capable HDR performer While 500 nits of brightness is sufficient to get a sense of HDR, you’d arguably want more if you’re an avid film-watcher. The support for Dolby Vision will help, but it’s likely to be a compromise in terms of out and out brightness.

Given Sharp’s time in the AV doldrums, the EQ series shows signs of a revivified and renewed brand looking to move forward and regain a foothold in the TV market.

The range is a neat and tidy-looking set of TVs, boasting solid features and smarts. We’ll have to wait and see whether the picture and sound cope in more standard situations – but, at this moment in time, Sharp’s EQ series looks promising.

When is the Sharp EQ range available?