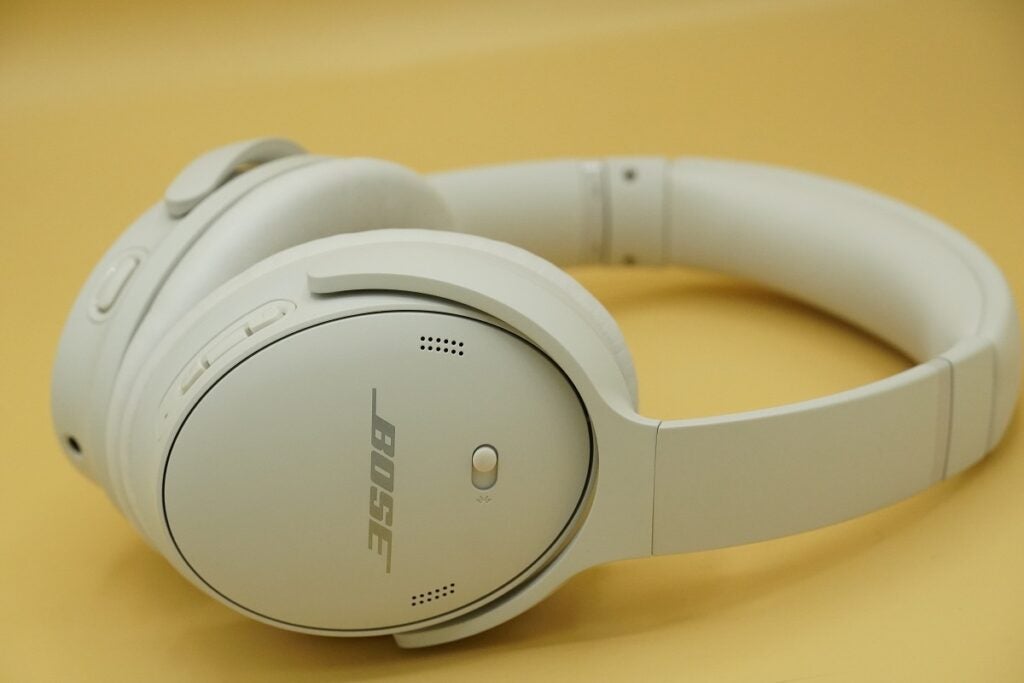 Bose’s latest effort in the QuietComfort series offers excellent noise cancellation, good audio, and an updated design. In that respect, they’re as good as they’ve ever been. If you’re in need of smarts and customisable features though, the QC 45 are rather sparse.

Rather sparse for features Lacks musicality of rivals

Bose made its name in the wireless headphone noise cancelling market with its QuietComfort series, but it’s been a number of years since the last iteration.

In the years since, Sony has emerged as the top dog in the noise cancelling headphone market, trading blows with Bose with each successive pair.

Given the amount of Bose headphones still being used by people on their commute, the series remains a popular one, but arguably Sony has replaced them atop the mountain with their WH-1000X series. So what does Bose have to offer in response with the QuietComfort 45?

From an aesthetic standpoint, the QuietComfort 35 II were fairly ordinary looking pair of headphones. The QuietComfort 45 are evolution over revolution, so while they retain the same profile as their predecessors, the design updates give them a modern look.

They’re not as sleek and minimalist as Bose’s own NC Headphones 700, the impression they give is that these are the workhouse of Bose’s headphone range. The changes range from the removal of the pleats and pluckers, with synthetic leather used for the earcups as well as the underside of the headband.

The headband structure has been reinforced with glass-filled nylon to help maintain its shape and guard against any falls. The material that covers the headband attracts smudges, especially if you purchase the White Smoke model over the Triple Black version.

Speaking of colours, it’s more than likely Bose will release more once the QuietComfort 45 have been on the market for a while, like it does with all its headphones.

Aesthetically it carries a more elegant, refined look. The matte design makes for a more cohesive look than the metal sheen of the older models, the transitions between the hinge, headband and ear cup are smoother, and at 240g the QuietComfort 45 are very comfortable to wear. Once on you’ll barely notice their presence.

The left earcup features the button for switching between the noise cancelling modes, and on the right are the playback/volume buttons and the switch for turning the headphones on and off. All are easy to reach, and with the slight gap in-between each playback button mistakes are few and far between in terms of operation. You still get a 3.5mm jack, while the USB port has been upgraded to USB-C.

The design is still collapsible for folding them up or you could choose to put them in the carry case to save them from any nicks or dirt. The changes to QuietComfort 45 aren’t massive, but they are successful, keeping the same iconic look but giving them a modern aesthetic in the process.

Bose never seems concerned with matching the battery life of rivals. Whether it’s the QuietComfort Earbuds or Noise Cancelling Headphones 700, battery life has been around the twenty hour mark. The QuietComfort get a boost but they won’t trouble the likes of Bowers, Philips or Sony, but it does at least mean they can be used for longer.

With fast-charging via the new USB-C port, you can top of the battery life quicker if you need more time, a 15-minute dash offers three more hours. A full recharge takes two-and-a-half hours.

Wireless connectivity is Bluetooth 5.1, and in terms of stability the connection is excellent. I’ve sailed through Waterloo, Victoria and London Bridge train stations with barely a hint of a break-up.

Multi-point support means the headphones can be paired with two devices at once, a flick of the switch on the right ear-cup jumping to a previously connected device. With Bose’s SimpleSync technology embedded, the QC 45 have synergy with other Bose speakers and soundbars for a private listening session.

Viewed in the context of recent headphone releases, the QC 45’s range of features is surprisingly low. Compared to the previous model it’s around the same so they’re not an improvement. If you’re looking for a Bose headphone with smarts, the Noise Cancelling Headphones 700 are the better choice and that may annoy some.

Perhaps that’s deliberate on Bose’s part to differentiate the two. So, while the headphones are compatible with the Bose Music app, it’s a rather sparse for features with no built-in voice assistance (you can engage your mobile device’s digital assistant by holding the playback button); no equaliser settings, no range of noise cancellation levels to choose from and no shortcuts. However, updates down the line could bring more features to the party.

Even wear sensor technology is missing, so music won’t auto-stop or play when you take the headphones on and off. All of this gives the QC 45 a very manual feel in terms of operation, and perhaps that makes for a more tactile, less complicated experience. If you’re someone for whom smarts have appeal then the Bose QC45 aren’t so clever.

However, where the QuietComfort 45 do not disappoint is in their noise cancelling performance. Well, they do slightly disappoint in only offering two modes: Quiet and Aware, which means ANC is either at full blast or filtering the outside world through to your ears.

Using microphones inside and outside of the earcups, and a proprietary algorithm to detect sounds (with a particular focus on the midrange frequencies) and the noise cancellation lives up to the QuietComfort legacy.

The world around becomes impressively and eerily quiet at times, and given how thoroughly the headphones can remove noises, it means there’s little need to raise the volume to hear your music. Even at mid volume levels their noise cancelling performance dispels sounds with almost nonchalant ease.

Vehicles are reduced to mere hums passing by. The hubbub of transport terminals is nullified very effectively, while journeys on trains simply pass by with little interruption, the bumps, knocks and sound of the wind rushing past cancelled out with supreme confidence.

The QC 45’s faculty with diminishing voices is impressive, nearby conversations when using the headphones at Borough Market reduced with such an effect, that at times that it looks as if people are just moving their mouths rather talking to each other. Wearing them surrounded by people at Waterloo station and there was a time where I’ve never felt quite as isolated from what’s around me.

When faced with wind, they remain good, though like any ANC headphone, blustery conditions can knock them off their stride. I also noticed that jolts from when a train door closes can also affect the noise cancelling for a brief but jarring moment.

A switch to the Aware mode and the sound of the world pours in naturally with clarity and detail. Waiting at a food market, I didn’t need to take these headphones off to hear my order being called out, and in general you can get a sense of what’s around you, though these headphones won’t quite give your ‘ears’ in the back of your head with regards to what’s behind you.

Are they better than the Sony WH-1000XM4? In some ways yes, in others the Sony may just have the edge. But there’s no doubting how formidable performance of the QC45 are. They may be the most effective noise cancellers on the market.

The QC 45’s sound is much in-keeping with the NC 700 HP, and as such they’re a clean, detailed and sharp presentation. Compare them to the Sony WH-1000XM4 or Philips Fidelio L3, and they’re not as musical in their performance.

But the QuietComforts are strong in a range of areas. Bose’s Active EQ serves to modulate the performance regardless of the volume level, and their sense of dynamism is fleshed out well with a distinct difference in communicating the highs and lows of a track.

These perform well towards the top end of the frequency range, their sharp tone giving treble notes sparkle and brightness in Raven’s GoGo Penguin. They’re a punchy performer, bass defined with a tautness, reined in rather than let loose but still enough to have impact.

It’s with vocals where the Bose aren’t as good as their rivals. Parting Ways from the Soul soundtrack lacks the focus of the Sony rivals, the lyrics rendered with a chilly tone that’s also present in Faye Webster’s Sometimes. It’s a more clinical, neutral tone and while that perhaps treats voices with more consistency it’s an approach that robs them a sense of emotion – an area where the Sony headphones excel.

Feed them a simple track, like John Powell’s The Bedroom, and the clarity, sharpness and detail of the guitar strums are excellent. You can hear every pluck of the guitar, every difference in the notes. The instruments in Robert Glasper’s London are naturally conveyed, with the Bose displaying a weightiness and sense of precision to the percussion that thoroughly engages.

The Bose QuietComfort 45’s presentation is clean, spacious, detailed and sharp but they can also sound clinical and a little brittle in tone. They can sound very good but there are more subtle and thrilling headphones to choose from in this competitive market. If sound is the priority, the Bose fall short of the best.

You’re looking to update from older QuietComfort models If you’re looking for headphones for the office, travel or home and don’t have the patience for other people, the noise cancellation is tremendous.

If sound is the priority There are more musical performers in the market, and they’re available for less. If you prefer Bose’s sound quality, then the QuietComfort 45 offer a typical Bose performance, but they do sound more clinical than their closest rivals

As an update to the QuietComfort series of headphones, the Bose QC45 fulfil their goal. Comfort is excellent and the noise cancelling impresses. If you own an older pair of QuietComforts and and are looking to upgrade then you can upgrade with confidence. In terms of audio there are better options available, and in terms of features they are surprisingly sparse for their premium price.

How much battery life do the Bose QC 45 have?

These headphones have a battery life of up to 24 hours

Do the QuietComfort 45 have built-in digital assistants?

No, neither Google or Alexa is built in

Can I adjust the noise cancellation performance?

You can only change between two modes: Quiet and Aware