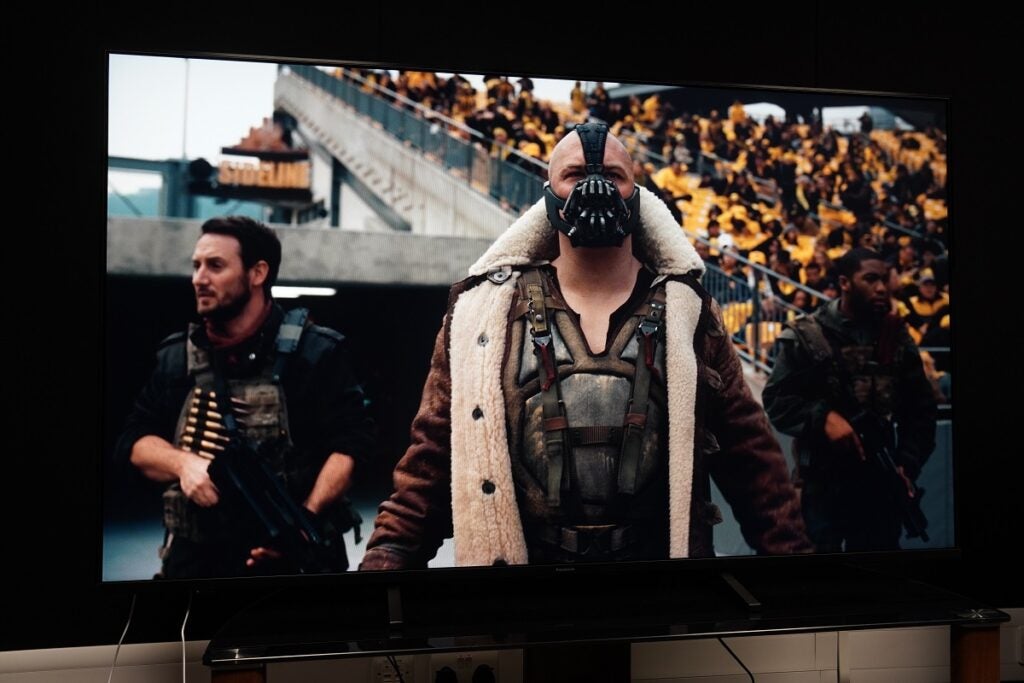 With a more competitive feature set than its predecessor, the JX940 is a case of small improvements adding up to a greater whole. It’s another accomplished set from Panasonic with colourful HDR picture quality and some useful usability tweaks.

Panasonic’s JX940 is its premium LED LCD TV series for 2021, bridging the gap between the Japanese manufacturer’s more affordable tellies and expensive OLEDs.

It retains the HX940’s edge-lit display but incorporates more features from its OLED cousins, including a suite of picture modes and the new HCX Pro AI processor.

I called the HX940 “a very appealing option” for anyone after an affordable big-screen option. Reviewing the JX940 earlier in its lifespan than the HX940 and while the asking price is higher, it carries all the attributes I enjoyed with the HX940 and more.

The JX940’s build quality is in-keeping with Panasonic’s more spartan design philosophy. Keep it simple seems to be the mantra practiced for this set.

In the UK, the JX940 comes in 75-, 65- and 55-inch sizes (the 49-inch model exclusive to Europe). To sound like a broken record, the JX940 is another neat and practical effort. The faux-leather backing on the rear is gone, and the depth of the set slightly engorged (by 28mm). That may give buyers something to ponder over whether to wall-mount or not.

More similarities to the older model arrive in the brushed bezel finish, with the adjustable feet able to be configured down the middle or spayed out wide.

The latter option, with the help an attachment, raises the TV’s clearance for a soundbar to fit comfortably beneath. Again, the feet have a cable clutter solution for filing cables out from the rear and for those looking at the 75-inch model, that comes without feet, utilising a central pedestal instead.

App selection not as big as othersBuilt-in digital assistantsSimple interface

The JX940 gets the new remote Panasonic has rolled out for 2021. It’s a lighter, neater affair but still big in size. Buttons are smaller, so there’s space for hotkeys that include Netflix, Rakuten TV, Prime Video, YouTube and Freeview Play, as well as a customisable My App button for quick access to another app.

One aspect that annoys about the remote is pressing the ‘Back’ button exits the smart interface altogether, which is inconvenient as you must call up the interface again.

Panasonic’s my Home Screen 6.0 comes with a few tweaks. Press the ‘Menu’ button and up pops a row of common settings to change on the hoof (Picture Mode, Sound mode, Voice control etc). A click on ‘Main Menu’ presents Panasonic’s more traditional design for control over all settings.

Pressing the ‘Home’ button on the remote brings up the app row, which can be customised in terms of the apps you want and their position. Press ‘Apps’ and the smart hub is the same as before with Freeview Play integration and SVOD apps appearing as large roundels.

Despite the addition of Disney+, Panasonic still lacks quantity where apps are concerned. The only music app is Deezer, and the only notable sports app is DAZN.

Adds VRR and HFR to gaming featuresSolid latency for gaming

Select Game mode and latency is 15.6ms (at 4K), which is actually less than the HX940’s 14ms. However, with the HDMI VRR standard, latency is theoretically lower, with the JX940 also certified for AMD’s FreeSync Premium.

Connections amount to a USB 3.0 port and two USB 2.0 inputs; Ethernet, Digital optical out, a CI+ 1.4 slot, analogue video input, headphone out, plus the usual satellite and aerial tuners. Bluetooth, Wi-Fi and DLNA are all present, and the JX940 has the Bluetooth Audio Link feature for sending audio from the TV to a pair of headphones or Bluetooth speaker. You can also connect a smartphone to the TV.

There is no Chromecast, but there is Mirroring for transplanting a mobile device’s screen to the TV.

New for this year is myScenery, which presents slideshows and videos to the sedate tones of ambient music if you want to relax at the end of a day. Both Alexa and Google digital assistants are built in for hands-free activation, and they’re also accessible via the mic button on the remote. Or you can choose to access them through an external smart speaker.

I queue up the same content I used to test the HX940 and there appear to be improvements, some bigger than others, and so my first thoughts are that the JX940 is more evolution than revolution.

I should mention the testing environment for the JX940 is different from the HX940 (the new room is much brighter), but even so, the JX940’s facility with dimly lit scenes feels like a step forward. A play of Jessica Jones’ episode A.K.A. Hellcat on Netflix (Dolby Vision), and the night-time scenes that were murkily described on the HX940 gain more definition and shape on the JX940.

Characters wearing dark clothes against dark backgrounds stand out a bit better. Highlight tones have more brightness; shapes of characters are more legible, and there’s an improvement with detail in the darkest parts of the image.

This improvement, however small, is aided by Dolby Vision IQ. Turn the lights off and DV IQ retains dark detail in night-time scenes. The Dolby Vision Bright Mode is still a peculiar one, and while IQ finds a solid middle ground, the Dolby Vision Dark profile still produces the best black levels when flicking through the modes.

HDR10+ Adaptive is supported and achieves a similar effect when watching the HDR10+ presentations 1917 and Wonder Woman 1984 on 4K Blu-ray, preserving detail in the darkest parts of the picture. The JX940’s black levels are perhaps overly strong out of the box, and without an adaptive HDR format in play there’s a deficit in dark detail with HDR10 content. That’s rectified by adjusting the brightness to draw out more detail.

Historically, Panasonic has fared well with motion and the JX940’s Intelligent Frame Creation (IFC) settings doesn’t buck the trend. With Custom, Max, Mid and Min options to choose from, first up is the opening chapter of 1917 as Blake and Schofield walk through the staging area and trenches.

At Max setting there’s judder evident with small movements of the arms and hands, as well as smearing of soldiers’ helmets as they move through the trenches. A step down to Mid and there’s still some judder and stutter with small movements, though the TV handles the movement of the camera, as well as characters in the foreground and background with a nice sense of fluidity. Min remains the best solution, making the image smooth but preserving the ‘filmic’ feel.

With scenes that stress the JX940’s motion abilities more, the JX940 gives up more performance. As Schofield runs down the trench at the film’s climax, at Max settings there’s slight tearing that recalls the LG C1’s performance, so again the Min setting wins out. A curious aspect of applying motion to a film like 1917 is the ‘invisible’ cuts become more apparent. And don’t bother with the Clear Motion setting as that dims content.

The JX940 upscaling satisfies when dealing with lower quality sources. There’s little to be done with the usual lack of detail, sharpness, and fuzzy sense of definition, but the JX940’s sense of colour towers through – strong and varied, but also accurate and natural in appearance. Dynamic mode is punchier, adding a bluish tone and redness to complexions, while AI Mode – borrowed from the OLEDs – uses the TV’s light sensor to adjust brightness. It’s there for those who don’t want to get too involved with the settings, but in certain circumstances can lead to a dimmer picture than leaving it on Normal.

A spin of The Martian on Blu-ray and as the camera pans across the Martian landscape during the opening scene, it’s a showcase for pleasingly rich and rusty reds. For a 1080p upscale it’s sharp and detailed, with plenty of detail retrieved from the character’s faces. Complexions are varied but also natural, the JX940 leaves the impression there’s little need to fiddle with settings.

A watch of Moana in 4K HDR and it’s another vibrant, confident and expressive showcase of the Panasonic’s skills, the pinks and oranges of the Sky as Maui and Moana ride on their raft look spectacular; while black levels hold up as strongly as they did on the HX940. Passengers (4K HDR) offers high levels of detail that the JX940 eats up, and bright highlights, like that of Aurora and Jim’s spacesuits, stand out well with little to no blooming.

Alas, not everything is perfect. There’s some backlight bleed in the black borders both top and bottom when watching The Dark Knight Rises, and if you turn the lights down low for any HDR film, that bleed can distract.

While the JX940 is bright enough to unlock HDR’s potential, full-array backlit LCDs go even brighter and aren’t much more expensive than the JX940 is currently. Viewing angles are solid, but at more extreme angles there’s a bluish tint, though you’d need a big living room to spot that.

In terms of sound, the Panasonic JX940 is perfectly fine. It handles dialogue without succumbing to sibilance, though sounds can hang low on the screen. Compare the JX940’s 30W sound system to Samsung’s OTS system, and with a film like Fury the Samsung can summon more height and a wider spread of sound.

Dolby Atmos is supported and there’s a variety of sound modes and customisations – head to Surround mode in the pop-up settings menu and there’s various modes to choose from to change the tuning, but there’s only so much that can be done. There’s not much bass to speak of, but there’s good sharpness and clarity to high frequencies.

Movement of sounds across the screen is solidly handled, and there’s depth to be found as well. It’s decent enough for daytime TV, and if you’re not too critical, fine for films and TV series. For those with more serious ambitions, this 65-inch screen needs to be paired with an external sound system.

If you’re a big screen TV with an accomplished picture and good smarts and features Compared to the older model, the JX940 rounds out its feature set to make it a more appealing set to a wider audience

If you’re after a brighter HDR performance The HDR performance the Panasonic puts in is very impressive, but if you want brighter, punchier images that Samsung and Sony have TVs that fit the bill

It’s a case of small but welcome improvements with the Panasonic TX-65JX940. Picture quality is accomplished, and the addition of Dolby Vision IQ and HDR10+ Adaptive helps tailor its performance to darker rooms a bit better.

Gaming-wise it’s a more competitive performance, and its smarts are better, all of which gives the JX940 wider appeal than the HX940’s ‘Hollywood for the Home’ motto would allow.

Some of the same issues carry over but there are fewer to grumble about than before. The JX940 is another capable set from Panasonic, though we’ll have to wait and see how it holds up against full-array LCDs in its price bracket to be sure of its overall quality.

What type of display does the JX940 have?