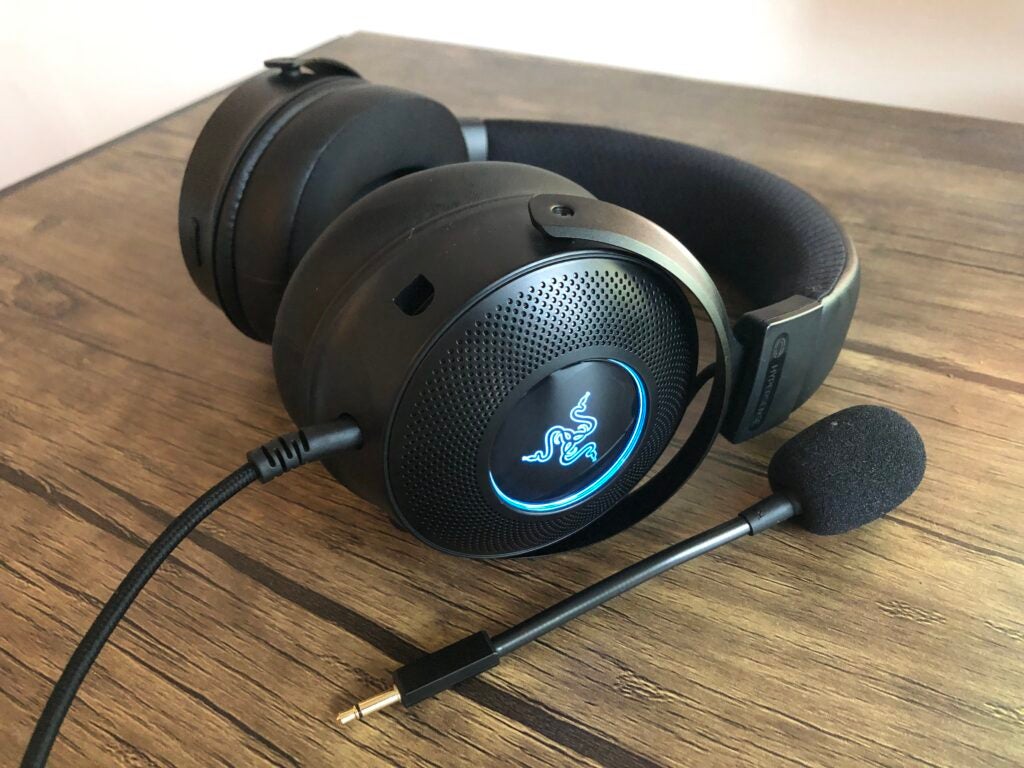 The Razer Kraken V3 HyperSense are one of the best gaming headsets you can currently buy. With a stylish and sleek look, as well as the HyperSense haptic feedback, it fully justifies the steep price.

The Razer Kraken V3 HyperSense is a wired gaming headset that features similar haptic vibrations to what’s you’ll find in a controller.

This headset can’t be accused of being a one-trick pony either, offering up amazing audio quality and being a pleasure to wear for lengthy sessions.

I’ve been using the Razer Kraken V3 HyperSense headset for two weeks now, trying it out on my PC, PS5 and Nintendo Switch. But is this wired gaming headset worth the steep price?

The design’s main attraction is the glow-up Razer logo on each earcup. You can customise the lighting to best suit your own style, so you can make them as subtle or as distracting as possible.

Personally, I think the overall aesthetic is minimal but stylish, and one of the more attractive headsets that Razer has come out with.

In terms of wear, they were remarkably comfortable for long periods of time and didn’t crush my glasses or earrings into my head. The only reason I knew I was wearing a headset was the rather short 2-metre cable attached to my PC.

Other than that, the comfort level is so high that I often forgot I was wearing them as I was listening to music and gaming. The Kraken V3 HyperSense feels like a headset that could last a very long time if treated well.

The right earcup houses the microphone port and the HyperSense button, which I will talk about more in the next section. The left earcup features a non-detachable cable, an infinite volume scroller and a mute button for the detachable microphone.

I would have preferred if the headset used the more conventional headphone jack instead of a USB-A connection, as it would then be able to connect to the Switch in portable mode. However, I think it’s a relatively small issue.

Unless you only use your Switch in portable mode, or you’re interested in a wired headset that can connect to your phone, you shouldn’t have any issues with the USB-A port with home consoles or a PC – and there’s always the choice of buying an adaptor if you’re desperate.

The standout feature of the Razer Kraken V3 HyperSense has to be the titular haptic technology, which brought both music and gaming audio up to another level.

HyperSense is an intelligent haptics technology that creates tactile feedback. The headset picks up key sound cues in games (and in music) and then replicates the sensations through vibrations. In laymen’s terms, the headset will vibrate during gameplay to enhance your experience, so every gunshot or explosion will be replicated via haptic feedback, creating a more immersive experience.

It’s a worthwhile feature if you’re looking for a more meaningful experience while you’re gaming, but it’s important to note that you can also get the Razer Kraken V3 without HyperSense for £30 cheaper. I personally think that the HyperSense feature is the best aspect of this headset, but the comfort levels and impressive audio still make this headset worthwhile if you want to skip out on haptic feedback.

While playing Call of Duty: Vanguard on my PC, I toggled through the medium and high levels of intensity – the lowest level is a bit too subtle for me – and it adds a whole new layer of depth to the game.

The haptics will spike if you land a headshot with your sniper rifle, or when you manage to blow up the enemy base. Simply put, I’ve never felt as involved in an FPS before, as it brings out another dimension of the game and makes the loud gunshots feel even more real.

You can toggle the intensity, or turn it off altogether. I dipped into Mario Odyessy on the Switch and found that the haptic feedback didn’t mesh as well. That said, turning it down to the lowest intensity added the occasional vibration when I dived into water or was attacked by a Goomba, which was more appreciated.

Altering the HyperSense can be accomplished by simply tapping the button; it will go up in intensity three times before turning off. It’s a simple, streamlined process, and I appreciated how easy it was to blindly locate the button on the headset.

As I expected, the headset was a little flatter when used with my Switch or PS5, but that doesn’t mean that it wasn’t impressive. I was still able to track my enemies in God of War, while small details, like the patter of a waterfall and scampers of wild animals, still shine through. Overall, the experience on consoles compared to PC is slightly less immersive and intense, but still of very high quality.

The Razer Kraken V3 HyperSense is supported by Razer’s Synapse software, which allows you to change the audio settings to your preference while you’re gaming or listening to music.

THX Spatial Audio support can be enabled on PC, which helps enhance surround sound to intensify 3D soundscapes, making your gaming audio more immersive. You can also turn on bass boost, mess with the equaliser and alter the microphone settings, but we’ll focus more on that in a little while.

The option of customisation means you can get the headset to perform the way you want. The effects were noticeable and I liked that I could create my own optimum settings for my music, games and TV shows.

In terms of the microphone, you can enable some enhancements for a better experience, such as volume normalisation, ambient noise reduction and vocal clarity. There is also the choice to use some pre-sets, such as Conference, Mic Boost and Broadcast.

I turned on ambient noise reduction and never had any complaints from anyone over Zoom, or the people I was playing in Call of Duty. The mic never seemed to cut out, and the fact that you can detach it when it’s not needed is a big plus for me.

You like the idea of Razer HyperSense:
If you’re interested in what haptic feedback can add to your game, the Kraken V3 HyperSense is a worthwhile purchase that offers outstanding immersion.

You just want a simple gaming headset:
If you’re not too fussed about HyperSense but still want a quality headset, I’d go with the standard Kraken V3 variation, which costs less while keeping the other core features.

The Razer Kraken V3 HyperSense is one of the best headsets I’ve ever used. It performs well over multiple platforms and the haptic feedback offers up a whole new level of immersion. The HyperSense feature is the main draw here, and when combined with the stellar audio quality and comfortable fit, it makes this headset one of the best choices for any gamer.

We use every headset we test for at least a week. During that time, we’ll check it for ease of use and put it through its paces by using it in a variety of games, as well as playing music in order to get the full experience.

We also check each headset’s software (if applicable) to see how easy it is to customise and set up.

We use as our primary gaming headset for at least a week.

Use on as many platforms as possible to test versatility.

Judge audio for both gaming and music playback.

Use with multiple games to test audio.

Yes, this headset does support Synapse, where you can adjust the RGB lighting or the audio levels.

Does the Razer Kraken V3 HyperSense have an audio jack?

No, there is only a USB-A connector port.

Does the Razer Kraken V3 HyperSense have surround sound?