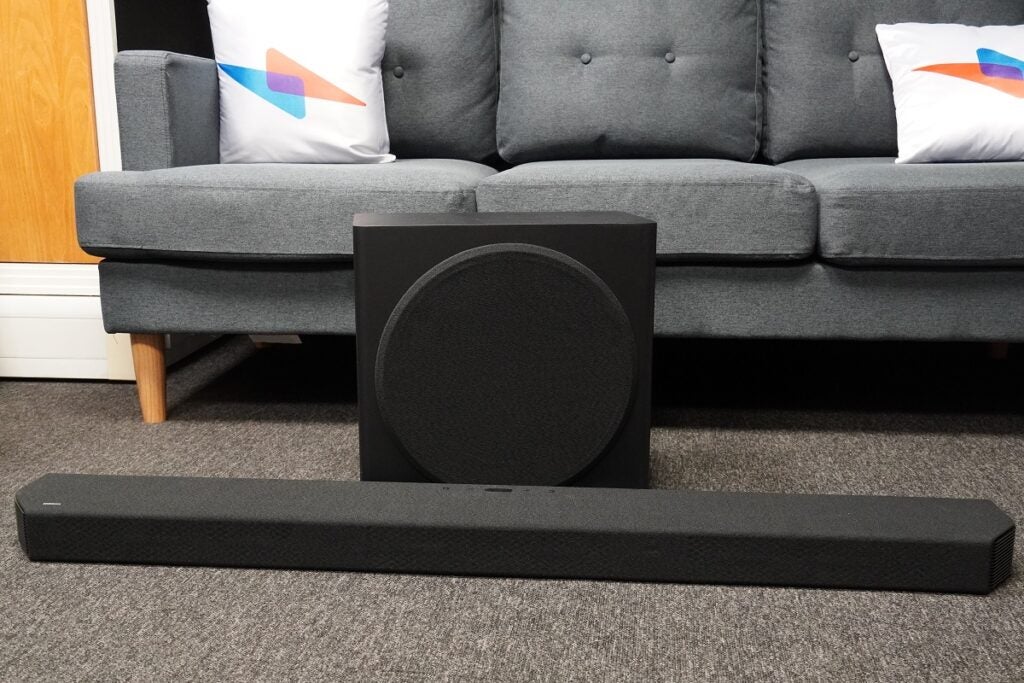 Blending power, naturalism, and a feel for 3D sound, the HW-Q900A is a cinematic soundbar with a big, powerful presence. With added connectivity options and room calibration tech (though with a few caveats), it’s another strong immersive bar from Samsung.

Samsung’s step down soundbar, the 7.1.2-channel HW-Q900A, has arrived to partner your TV with cinematic, room-filling sound.

The HW-Q900A looks identical to 2020’s HW-Q900T, with the same ridiculous number of speakers. So, what has changed?

On the surface, not much. The tweaks lie inside with room calibration and more ways to feed the bar with audio. So, for those in the market for a soundbar that can do justice to their 4K Blu-ray collection or streaming library, the HW-Q900A’s performance may have you clearing out space for this colossus of a soundbar.

The similarity in appearance to the previous model presents an issue as the design wasn’t perfect. The issue centres – pun intended – on the placement of the display.

The HW-Q900A has two: one on top and a front-facing effort. The latter is a series of three blink-and-you’ll-miss them LEDs, like the one seen on the HW-S61A. The top surface features the more useful display, which lists the audio format that’s playing, the current input and the settings for the speaker levels, among other details. And once again, Samsung’s placement means you can’t see it from a sitting down position.

If Samsung’s SmartThings app offered the same level of control as the remote, perhaps this wouldn’t be as much of an issue. But it doesn’t, as the app doesn’t go into the minutiae of advanced settings. That means you must get up and walk over each time you want to adjust, say, a specific speaker level. This is not a soundbar for couch potatoes.

If you make the trip, the top surface is home to the same coterie of buttons as before, which includes a multi-function button, volume controls and a privacy button. There’s no change to the remote, which is the same easy-to-hold ergonomically shaped zapper.

Dimensions are identical to its predecessor (1232 x 69.5 x 138mm, WHD); and so is the weight – 7.1kg and 9.8kg for bar and sub respectively. The number of speakers is rather ridiculous at 16, with a centre, side-firing and upfiring speakers making the numbers.

It’s draped in the same Kvadrat fabric that, perhaps deliberately, looks both smart and nondescript. Out to the sides are the side-firing speakers with a silver grille that reminds me of Jaws from the Bond series.

It’s big, well-built and looks like it means business; just about fitting on a TV stand designed for 65-inch TVs. Wall-brackets and screws are supplied, while in a recessed area lies an HDMI out (eARC), two HDMI inputs that can pass through 4K HDR10+ and Dolby Vision, plus a digital audio optical input.

I encountered HDMI handshake issues with the soundbar when used with a QN900A 8K QLED and Panasonic DP-UB820 4K player. Turns out the Panasonic was causing the issue, so for those with a Pana player as part of their set-up, connect the Samsung TV and soundbar first and then add the Panasonic player.

It’s in the features where the HW-Q900A diverges – a little – from its predecessor. AirPlay 2 is included; great news for iOS users who can now stream audio without resorting to Bluetooth.

The second feature is SpaceFit Sound+ technology and Auto EQ. The latter uses a built-in microphone and test tones to optimise and calibrate the subwoofer’s low frequency performance. You can run this at any time from the SmartThings app or via the remote.

The room calibration technology is referred to as SpacetFit Sound+, but essentially, it’s the Adaptive Sound+ mode seen in the settings of compatible Samsung TVs. It adjusts and tunes the soundbar by analysing its environment, taking into consideration soft furnishings, walls, and curtains. Room calibration has been asked for in previous years but there’s a caveat to its implementation. It only works in tandem with selected 2021 Samsung QLED TVs (Q70 and above).

You can bring the bar online in the SmartThings app or skip that process entirely if you choose. With SmartThings, you can place the soundbar in a ‘room’ and link to compatible products; add Alexa and Spotify Connect, alter equaliser settings, volume, woofer settings and sound modes from your smartphone or tablet.

Samsung is sticking with its Tap Sound feature whereby Samsung Galaxy smartphone owners can transfer audio to the soundbar with a tap.

With Blade Runner 2049 up first, as Ryan Gosling’s K heads to Sapper Morton’s farm the HW-Q900A brings a big and powerful sense of bass to proceedings. The high frequency tones of Hans Zimmer and Benjamin Wallfisch’s score are free from distortion; the expanse of the soundstage well beyond what of any TV.

As K’s Spinner comes into land, the height channels are handled rather conservatively. Perhaps testing in a different room with the soundbar placed lower than I’m used to may have made a difference.

But a tweak of the upfiring speaker settings wrings out more definition, although compared to the HT-A7000, the Q900A’s height performance lacks the Sony’s clarity and detail.

Bass gets a weighty and powerful audition in V for Vendetta as the Old Bailey gets blown up. There’s no distortion to the low end, or sense that bass overly dominates proceedings by obscuring dialogue or Tchaikovsky’s 1812 Overture. Darren Aronofsky’s mother!, is another impressive showcase, you can feel the sub-bass as Jennifer Lawrence’s titular character loses control.

Playing the original Blade Runner, and the new model isn’t as boisterous as the old one, taking a more measured approach. As Spinners fly across the fiery Los Angeles landscape, effects aren’t projected into the room with the same force.

And the loss of the Q950A’s rear channels hampers the Q900A’s ‘3D’ ambitions, but as the opening race of Ready Player One shows, the Q900A has a knack for skilfully steering effects across the soundstage. The appearance of T-Rex and King Kong adds a vertical aspect, while multiple car crashes create width that’s comfortably wider than the bar itself.

But the Q900A’s appeal is not just rooted in crash, bang-wallop sonics. It kept my interest during quieter scenes. Scenes like when Scarlett Johannsson’s Lucy (in Lucy) commandeers a medical theatre and the small background details of the oxygen pump and the EKG machine place you right there with the character. Or where Himesh Patel’s Malik recovers after being hit by a bus in Yesterday and there’s a lovely sense of detail and naturalism to the way the HW-Q900A handles the scene, an almost effortless feel for the rhythms of the scenes that feel realistic.

With DTS:X soundtracks the bar is again a little conservative with both Get Out and E.T: the extra-terrestrial. Nudge the volume up and Q900A finds its groove. When ET gets lost and the spacecraft takes off without him, there’s an exciting sense of size, weight and movement as the ship flies above the TV towards the seating position.

Elsewhere, when Eliot first discovers E.T., you can hear the scuttle of the little alien’s feet as he scampers across the soundstage that extends the width of the scene in a clever but natural way.

With a dedicated centre channel, voices have character. Whether it’s Bane’s distorted reverb in The Dark Knight Rises or Chris’ ‘session’ with Missy in Get Out, there’s clarity to dialogue. In more frenetic scenes, like in Fury where tanks face off in a field against German troops, intelligibility can be lost in the mayhem of tracer bullets and ricocheting missiles, but a tweak of the centre channel carves out more space for all those elements to co-exist. Dialogue matches its placement on and off screen, and no lip-sync issues were noted.

With Q-Symphony and a copy of Doctor Sleep on 4K, the QLED and soundbar combination feels like your own private cinema. The opening scene that introduces Rebecca Ferguson’s slippery Rose the Hat produces a sense of space and scale; the ambience of the forest handled by the TV’s top speakers, with more specific effects coming off the screen while the soundbar handles bass and farms sounds out wide (like the twigs being stepped on). It’s an immersive, detailed sound.

Musically it’s a solid performer. La La Land’s Another Day of Sun is full of sunny bombast and excitement, and the HW-Q900A keeps up with the pace, but scales down to convey the quieter moments when it needs to.

As a music system there’s Bluetooth, AirPlay 2 and Spotify Connect available, although I could get neither AirPlay nor Spotify to work. The former is potentially an issue with Wi-Fi set-up I’m using, but Spotify Connect mysteriously would not via the app or Alexa.

Music playback over Bluetooth is fine, spacious with reasonable levels of detail and definition, though dynamism is not particularly expressed. I suspect Spotify Connect would amp up its musical skills further. Another sample is incoming and the review will be updated with those thoughts.

You want actual 3D sound £1000 will be a lot to spend for some on an Atmos soundbar that doesn’t come with the immersion of rear speakers. The HW-Q950A launched at £1599, but at the time of this review (ahead of Black Friday), it’s less than £1000

The HW-Q900A’s front-heavy approach means you don’t get the same level of immersion than you would from a system with rear channels. But if you don’t have the room for that then getting up close to this soundbar might be the better option.

The HW-Q900A creates a sense of space and scale, firing effects in every direction but without over-egging it. It consistently delivers enjoyable sound whether it’s playing action films, suspenseful horrors, or dramatic TV series. The HW-Q900a comes very much recommended.

Does the HW-Q900A support Chromecast?

You cannot cast to the soundbar via Chromecast.

Yes it can, although you’ll need a Dolby Vision-enabled TV to see the benefit.