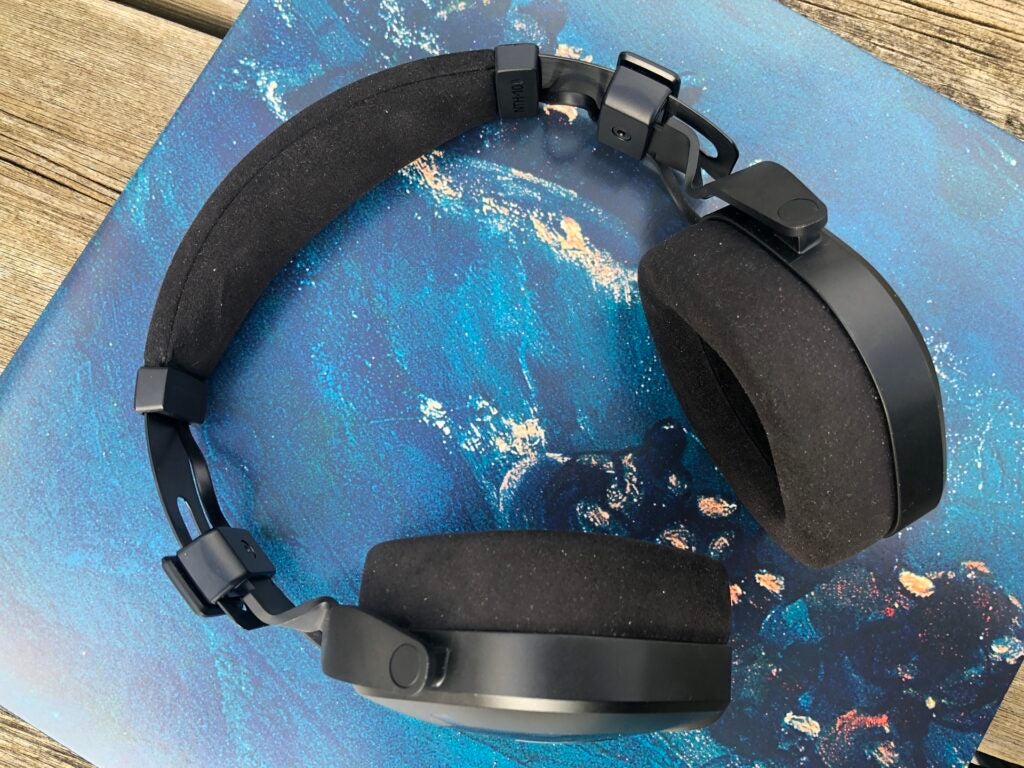 Once you get over the outdated configuration, there’s nothing but positive things to say about the NTH-100 wired headphones. Whether you want to use them for casual or critical listening, these Røde headphones are a compelling option.

Articulate, convincing sound in all scenarios Built to lastGood-looking (in a purposeful sort of way)


Locking headbandFully adjustable fit that can be secured in place

If you’ve never heard of Røde, it will be because the NTH-100 is the Australian company’s first pair of headphones and first foray into the world of consumer electronics. And if you have heard of Røde then you don’t really need me to tell you that the Australian company is an authentically big deal in pro audio, with its microphones in particular being extremely well regarded.

Of course, it’s one thing to be a big cheese in the pro audio world, but quite another to make a similar impression for domestic equipment. And, at first glance, Røde hasn’t done itself any favours with the way in which it’s specified these NTH-100 headphones. “Throwback” is perhaps too kind a description.

Still, if they perform beyond their price then who knows how many prospective customers will be willing to step back in time, technologically speaking.

So, no – the world isn’t short of over-ear headphones at this sort of money. But similarly priced over-ear headphones of this antiquated configuration are, predictably, rather more difficult to come by. While Røde may be pleased at the lack of competition faced by the NTH-100, the brand might want to spend a moment wondering why that is.

Little has changed, in design terms at least, since Day One of over-ear headphones entering the market. And if you were expecting Røde to be the brand to tear up the rulebook and start again, then you’re mistaken.

The NTH-100 look exactly as you’d expect a pair of over-ear headphones to look. The closed-back earcups carry a nice bold “Ø” logo and the company’s customary gold dot – and as far as design goes, that’s your lot. Alcantara-covered memory foam for the contact points (augmented by “CoolTech” gel for the earpads) is always welcome; but otherwise, the NTH-100 are a “none more black” metal-and-plastic affair. Fancy jazzing things up somewhat with differently coloured earpads, headband or cable? Go right ahead – but it will cost you.

Build quality is professional – no corners appear to have been cut, no pennies pinched. The Røde NTH-100 look and, at 350g, feel properly constructed and built to last. Which, for a product that has pretensions towards professional applications, can only be a good thing.

It might be easiest to start with a few of the things the Røde NTH-100 don’t feature. Many consumers might think wireless Bluetooth connectivity, touch or voice or app control, or active noise cancellation are a given when spending this sort of money. But the NTH-100 go without all the above.

What your £149 (or equivalent) buys is a pair of closed-back, over-ear headphones that come with a 2.4m cable that terminates in a 3.5mm jack at one end and a twist-and-lock plug at the other. The cable can plug into either the left or right earcup (which is useful), and a shorter (1.2m) cable is available at additional cost – which is tight in the extreme. There’s a screw-on 6.3mm adapter supplied, too.

That sum also gets you Røde’s “FitLock” system, which we’re confidently filing under the “genius, and certain to be ripped off” category. The metal headband adjusts for size, of course, but a little twist-lock on either end lets you lock the headband in position, so it remains the correct size for your head, no matter how many times you take the headphones off or stash them in the soft carry-case they come in. Sometimes, it’s the little things…

Sound is delivered by a couple of 40mm full-range transducers (one inside each earcup, naturally enough). Røde is claiming a frequency response of 5Hz-35kHz – which, should this turn out to be the case, is pretty impressive.

And that’s your lot as far as features are concerned. It’s quite obvious that Røde has designed the NTH-100 to be all business.

Rapid, balanced overall soundImpressively detailedAdept with music of any kind

There are two ways to consider the Røde NTH-100 – either as a pair of headphones for passive listening for no other reason than enjoyment, or as a tool for use when mixing, mastering or otherwise listening with a purpose. The good news is that these headphones are great in both situations – as long as you don’t get tangled in that, um, generously long cable.

Given higher-quality stuff to work with (a 24bit/96kHz file of My Bloody Valentine’s Loveless, for example), the NTH-100 are a brilliantly balanced and completely even-handed listen. They don’t ramp up the lower frequencies in a drive for some superficial excitement of the type you see in less rigorous headphones. Instead, bass information is swift, properly deep, and unwaveringly straight-edged in its control. There’s a stack of tonal and harmonic detail revealed, and because its attack and decay is so carefully dealt with, this acts as the ideal foundation for the rest of the frequency range to ride on.

So the mid-range is entirely unmolested by droning or blurring from the bottom-end – because there simply isn’t any. This leaves it free to get on with the job of handing over the details. And it doesn’t matter if they’re the finest, most minor or most transient details; the NTH-100 identifies and delivers them. It doesn’t do this at the expense of the bigger picture, though – everything the Røde do, they do in the service of the overall recording. But if there’s information in a song to be revealed, these headphones will reveal it.

The top-end is similarly informative, eloquent and convincing. Treble sounds shine, but they’re never hard, nor do they substance. They integrate smoothly with everything that’s going on beneath, with the result that music served up by the NTH-100 sounds positive, unified and of a single performance. And that’s true even if you’re listening to an overt cut-and-paste collage such as Kendrick Lamar’s Backseat Freestyle – the integrity of the overall sound is never in question.

The Røde are similarly accomplished where dynamics (both the broad quiet-to-loud-and-back-again stuff, and the more subtle dynamic variations evident when listening to, say, an unaccompanied piano) are concerned. They display no problem whatsoever when handling even tricky rhythms and tempos, expressing them in a natural and unforced manner. And even though they’re detailed and open enough to make the differences between mix “A” and mix “B” of the same song apparent, they’re first and foremost an engaging, entertaining listen.

You want to hear a song in its entirety
The Røde are almost fanatical about the details of a recording.

You like being pandered to Røde politely suggests you take your desire for noise-cancelling elsewhere.

That the Røde NTH-100 are a retrograde product is obvious, and it isn’t unreasonable for some prospective customers to take one look at that cable and decide to spend their money elsewhere. But if performance-per-pound is the be-all and end-all of a purchasing decision, the NTH-100 are nigh-on compelling. Whether you want them for casual or for critical listening, it’s difficult to suggest an alternative product at this sort of money.

What cables does the Røde NTH-100 come with?

The headphones come with a standard 3.5mm jack plug, as well as a 1/4-inch to 3.5mm adaptor for connecting to professional audio equipment.