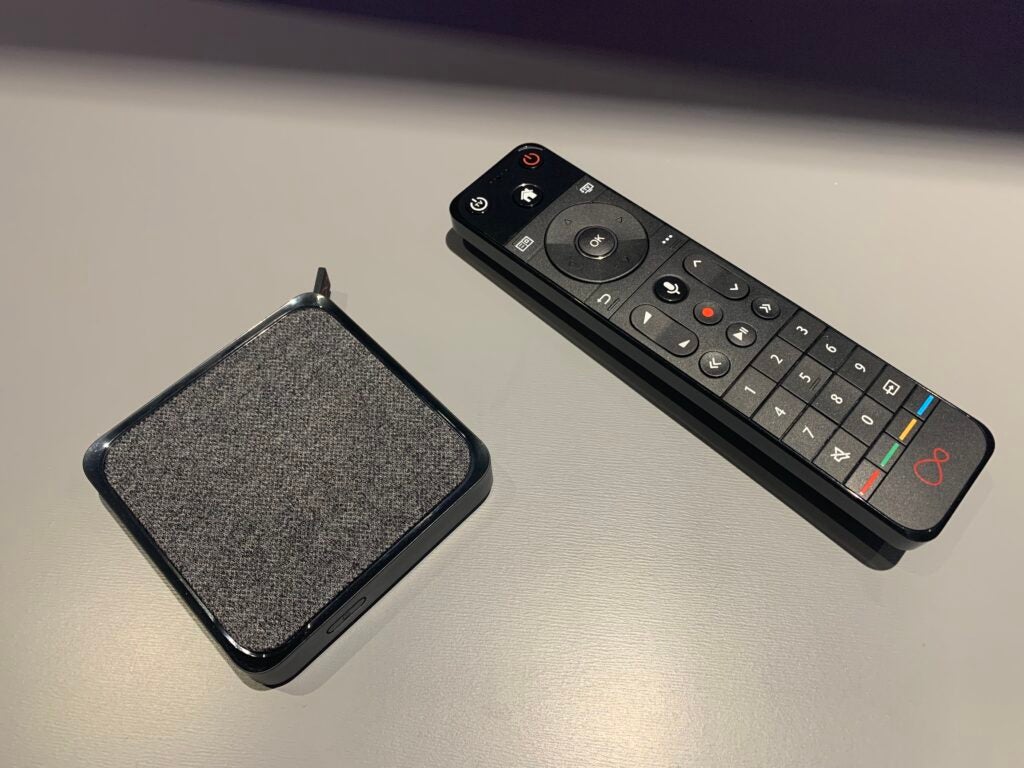 I got the opportunity to see the Virgin Media Stream in action at the brand’s launch event in April. Here are my initial thoughts on the flexible TV service.

One of the biggest draws about the Stream box is the 10% discount Virgin Media offers on any streaming services you choose to pay for through the company. It’s an interesting idea that effectively saves you money the longer you subscribe to certain over-the-top (OTT) streaming services.

The Stream requires Virgin Media broadband to use it. If you aren’t already a Virgin Media customer then you’ll need to switch broadband providers to get it, which may mean paying more or less, depending on your current broadband package. There’s also the £35 activation fee, so it is worth doing the maths before you switch.

The Stream is a square in shape with rounded edges and a grey mesh fabric top. In terms of size it is not much larger than the palm of my hand. The rim of the streaming box lights up blue to let you its on.

On the front of the box is a the power switch and around the back is an HDMI port to hook the device up to a TV. I’m a fan of the compact design and think it’d look great if you’re not looking for anything too large or bulky to take up space on your TV stand.

The Stream comes with a remote, with a little microphone symbol indicating that the Stream’s interface can be fully controlled with your voice. There’s a home button, playback controls, navigation pad and number pad for entering channels. Everything you’d expect, then.

One of the key selling-points of the Virgin Media Stream is that it turns any recently built TV (more specifically, any from the last 7 years) into a voice-activated smart TV. This means you can access many of the channels, apps and streaming services you love in one place and navigate them with your voice.

I was given a tour of the interface during the demo, which appeared well-organised and easy to navigate.

The home page is the top of the Apps section

Along the top of the screen is a list of categories, including Apps, Live TV, Catch Up and Box Sets & Movies, as well as icons for search and settings.

There’s a section for On Demand content you may want to continue watching and a handful of picks from each of the streaming services and apps you have installed.

The Live TV section, as you can probably guess, is where you go to watch live ‘linear’ TV broadcasts. There’s also a EPG (Electronic Programme Guide) you can access with a list of channels and schedule so you can see what’s on now and later.

The Catch Up tab has sub-sections like Discover, Channels and Categories, while Box Sets & Movies is full of movies available to rent and content you can pick up on where you left off.

Overall, the interface seems to be well laid out and easy to use, though I’d want to try searching for content myself to give my final verdict on this.

With Stream, you can watch channels from the BBC, ITV, Channel 4, Sky and more, and access apps like Netflix, Disney Plus, Prime Video, YouTube and BBC Sounds. There are also a large number of catch up services available, including BBC iPlayer, ITV Hub and BritBox, to name a few.

I was disappointed but not overly surprised to see that Apple TV+ and NOW didn’t appear to be on board, though I wish Spotify would have been there for music fans. I was happy to see that Disney Plus was not only available, but also qualified for the “Stream Credits” discount, because like Apple and Now, the streaming service isn’t found on every smart TV.

Virgin Media also offers discounts on a handful of these apps – as long as you’re willing to subscribe to them through your Virgin Media account.

There are some major benefits to this. You’ll only need to keep track of one bill every month and it can regularly save you money on qualifying apps. The apps exist on a 30-day rolling contract, meaning you can add and drop them with no more commitment than a regular subscription, and there’s no underlying cost for the Stream box itself beyond the initial activation fee.

The 10% discount, or “Stream Credits”, work by calculating 10% of the amount you paid on streaming subscriptions the previous month. You can then apply those credits to the following month’s rolling contract.

This means that – as long as you don’t catch yourself paying more for broadband through Virgin Media – you should be able to save yourself a good chunk of money each month on any streaming sites you’d be paying for anyway.

After experiencing a demo of the Virgin Media Stream, I think the device would be a great choice if you want to make your TV smarter with voice controls and a simple interface that encompasses many of your favourite TV channels, on-demand services and streaming apps. However, if you primarily use Apple TV Plus or NOW, you’ll probably want to look elsewhere.

It’s also an interesting prospect for those juggling a handful of streaming subscriptions who want to collate them into a single flexible bill and save some cash while they’re at it. This makes Stream ideal for those already paying out for Netflix, Disney Plus, BT Sport or Sky Sports and Cinema packages.

Just make sure you’re not getting a worse deal by switching to Virgin Media broadband or the 10% discount might not be worth it for you.