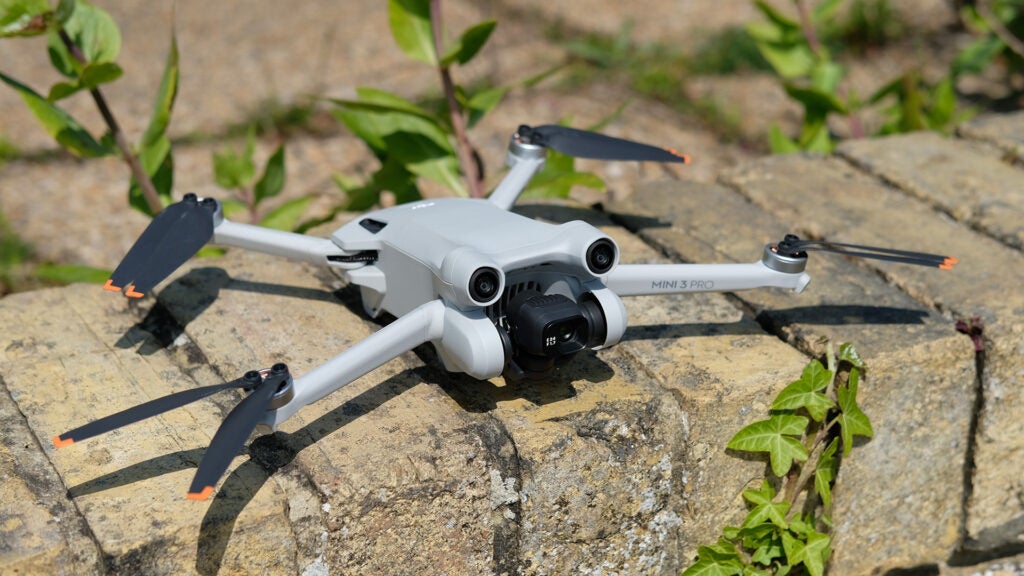 Offering a better camera than any other sub-250g drone, as well as obstacle-sensing tech, long battery life and responsive, easy-to-use flight controls, the DJI Mini 3 Pro is a drone with true mass appeal. While it looks quite expensive next to DJI’s other Mini models, its design and performance goes above and beyond the bar that they’ve set. Its camera can struggle a little at night, which means there’s definitely still a place for larger, pricier drones such as the DJI Air 2S and Mavic 3. However, for general everyday aerial video and photos, the Mini 3 Pro makes a lot more sense for all but the most demanding of users.

If you own a consumer camera drone or are thinking about buying one, chances are it’s made by DJI. The Chinese company is far and away the market leader in this area, and the arrival of a new model in its most compact, most budget-friendly Mini line is something aerial photographers and filmmakers have been awaiting for some time now.

However, the DJI Mini 3 Pro isn’t an entry-level offering. As the £700-plus price tag and the “Pro” in its name suggest, this model is really aimed at professionals and more demanding enthusiasts over beginners (although the latter will find it mercifully easy to fly, as I’ll get to later).

To that end, it comes with a whole host of updates and new features that set it apart from its predecessor, the Mini 2, including a much-improved camera and a three-way sensing system to prevent crashes.

Having spent a few weeks in its company, I’m hugely impressed by what I’ve seen – so read on to find out the reason s the Mini 3 Pro might be the perfect drone for you.

There are multiple versions of this drone available, see below for all the models:

Like the Mini SE and Mini 2, the Mini 3 Pro has been specifically designed to weigh less than 250g in flight. So, at 249g when loaded with a microSD card and Intelligent Flight Battery, it falls into the category of drone that under UK law can be flown in public places, within 50 metres of people and above people.

Any drone that’s heavier than 250g will encounter more restrictions in terms of where it can fly, which immediately makes the Mini 3 Pro and its lightweight ilk appealing to regular users (who probably don’t have access to wide swathes of private land).

The Mini 3 Pro itself sports a folding design and is made of thin, lightweight plastic. Having grown accustomed to using the much heavier DJI Mavic 3, it appeared a bit flimsy on first being pulled out of the box. However, I quickly realised that it’s more than tough enough to stand up to constant use and flying in breezy conditions. It has a more aggressive, poised look than the Mini 2, and DJI says that this gives it a bit more stability in the air.

When folded, it’s tiny as well as lightweight: just 145 x 90 x 62mm. You could conceivably fit it in a coat pocket, but I much preferred using the compact protective carry case that comes as part of the optional Fly More accessory kit (which costs £159/€189 and also includes two extra batteries, a charging hub and two spare sets of propellers – all of which can fit in the bag). You can carry the drone, spare batteries and one of the two available remote controllers around all day with zero fuss this way. The drone also comes with a plastic cover to protect the camera and its delicate gimbal mount when not in use.

In terms of connectivity, there’s a single USB-C port on the drone’s rear for transferring files or recharging the Mini 3 Pro’s battery. Next to it is the microSD card slot, which can handle cards up to 512GB. Underneath this sits the battery – which fits securely, but is easy to remove and replace.

The DJI RC-N1 controller that comes with the cheaper Mini 3 Pro package is built to accommodate your smartphone (it connects via Lightning, micro-USB and USB-C), running the DJI Fly app. For a little more you can swap that out for the DJI RC, a new remote with its own bright 5.5-inch touchscreen and integrated Fly app. As well as freeing up your phone, the RC includes a card slot so it can store footage; it offers around four hours of battery life. Having used both the RC-N1 and RC during this review process, I did prefer the latter – but not to the point where I think it’s worth the extra outlay over the N1 (unless, perhaps, you’re a frequent pilot looking to save your phone’s battery life).

The Mini 3 Pro is gloriously easy to fly. After unfolding its propeller arms, removing the gimbal cover, switching both it and the controller on, and waiting for the two to pair (all of which takes a matter of seconds), a tap on the on-screen take-off button gets it straight into the air. From there it flies like any other standard quadcopter, with simple twin-stick controls that give the pilot a great deal of precision over its positioning and speed.

There are three flight modes available: N (normal), C (cinema, which reduces flight speed to ensure smoother video pans and moves), and S (sport, which increases speeds to maximum and removes all obstacle sensing). The drone flies swiftly (up to 16m/s in S mode) and stably, with a prompt response to the user’s control inputs.

This is the first drone in the Mini series to feature obstacle-sensing cameras, and these cover all directions apart from upwards. If the drone is travelling toward an object, it’ll detect it and stop the movement, which significantly lessens the chances of a crash. I found they worked perfectly well, although I confess I wasn’t actively trying to crash my review sample at any point.

The sensors also work well with the automated flight modes available, meaning you can ask the Mini 3 Pro to follow you or another moving object (you draw a box around your desired tracking object in the Fly app, then select Active Track to do this), and it will do so while moving around obstacles where possible. Unfortunately, I found the tracking to be quite fussy, often losing its subject or not locking on when I dragged the box around something. Hopefully, this will be improved through future firmware updates, since the idea of getting on my bike and having the drone autonomously follow me around like the camera in a third-person video game is extremely attractive.

The Intelligent Flight Battery offers up to 34 minutes of flight time off a single charge, which is three minutes more than the DJI Mini 2’s battery. This is generous, but if you need longer then you can buy extra batteries to take with you. Or, you can use the optional Intelligent Flight Battery Plus, which gives the drone up to 47 minutes of airtime – at the cost of bumping its weight significantly past the 250g mark and thus making it subject to stricter rules about flight location.

The Mini 3 Pro has a much-improved camera in comparison to its predecessor. While it isn’t able to offer the gloriously rich 10-bit footage you can capture with larger drones, it’s certainly the best we’ve seen so far from a sub-250g model, and super-impressive considering the tiny size of the camera module.

Footage can be shot at up to 2.7K and 4K resolution at up to 60fps (the Mini 2 only supported 4K up to 30fps), and Full HD at up to 120fps for smooth slow=motion playback. The camera can record in MP4 or MOV formats, encoded using H.264 or H.265 codecs; the latter uses less storage space, but requires newer hardware to play back.

You can also choose to record using a normal colour profile or D-Cinelike, a more enthusiast-friendly profile that comes out of the camera looking flat and lifeless, but sets a better base for those who want to colour-correct and grade footage themselves post-production. The first half of the below sample footage was shot using the normal profile, while the latter part (from 00:58) I shot in D-Cinelike and graded using DaVinci Resolve.

Deciding to put that to the test, I ventured out to shoot some sunset and night-time footage, which you can see in the video below. It was impressive by small drone standards, in an area where their tiny camera sensors have traditionally struggled to deliver anything other than grainy, noisy results. There’s definitely still some softness in the post-sunset 4K shots, especially when viewed next to footage captured during the day; but for a small drone, I’m more than happy.

Still photo performance is solid, too, day or night. You can capture in JPEG and RAW formats at up to 48-megapixel quality – and with a bit of post-production tweaking, images look impactful and sharp.

The gimbal is also improved over previous Mini models. Not only is it great at keeping the camera beautifully level and stable, but it also offers a larger pitch that allows it to be tilted upwards. It can even be flipped 90 degrees to capture photos and videos in a portrait format – a boon for users who want to create TikToks and the like.

If you want a drone you can fly anywhere, the Mini 3 Pro’s low weight means it can be flown almost anywhere in the UK. It’s not the only sub-250g drone around, of course, but it offers the best image quality and flight safety features. For a take-anywhere, fly-anywhere drone that’s easy to use, it currently doesn’t get any better than this.

If you’re looking for the best image quality a consumer drone can offer, I’d suggest the DJI Mavic 3 or DJI Air 2S over the Mini 3 Pro. These are larger and pricier, but their superior cameras allow expert users to wring more detail and impact out of their photos and videos.

Given its size and weight, the Mini 3 Pro might be DJI’s most appealing and impressive consumer drone yet. Under the UK’s current drone laws, the Mini 3 Pro’s 249g weight allows it to dodge the bulk of restrictions and fly pretty much anywhere.

That it can do so while delivering image quality this good, with excellent battery life and obstacle avoidance, makes it hugely appealing for amateur aerial photographers and videographers looking to take their game to new heights (no pun intended). It might not be the cheapest small drone around, but I think it represents excellent value for money.

We thoroughly test camera drones with hours of flight time, as well as capturing sample photos and videos. We’ll always tell you what we find and we never, ever accept money to review a product.

What resolution video can the DJI Mini 3 Pro record?

How long can it fly for?

How much storage does it offer?

The DJI Mini 3 Pro supports UHS-I Speed Class 3 microSD cards with capacity up to 512GB. DJI recommends SanDisk, Samsung, Lexar and Kingston cards, with a full list of specific recommended card models available on the DJI website.
There’s also a small amount of internal storage: 1.2GB to be precise, which is only enough for about 2 minutes of 4K/24p video, or 11 48MP photos.