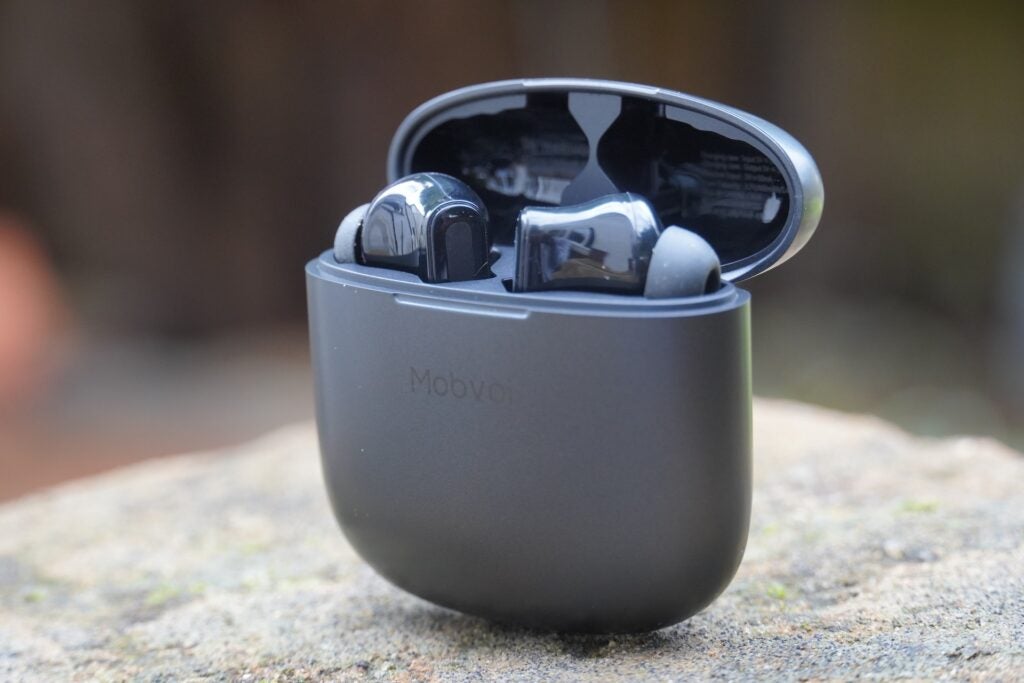 A low asking price and ANC don’t tend to go together well, but they make pretty good bedfellows in the Mobvoi ANC Earbuds.

Only a few years ago, true wireless earphones with ANC were commanding prices of more than £200. So it’s intriguing to now see that the tech has made its way to a price where everyone can sample it.

The Mobvoi Earbuds ANC are from the same people behind the TicPods true wireless series, which have been overshadowed in recent years by the glut of big-name brands trying to wiggle in on the affordable true wireless market.

With Mobvoi looking to steal some of that limelight back by bringing noise cancelling tech down to £50, are these buds a success? Happily for the Mobvoi earphones, the noise cancellation is their most praise-worthy attribute.

In terms of appearance, the Mobvoi are neither obviously tacky nor do they resemble a premium pair of wireless earphones. They feel quite sturdy despite the plastic construction, with the glossy finish adding, well, a bit of gloss to them.

The long stem grants some balance when they’re in the ear, and in terms of comfort they sit right in with no real issues. They can become loose in use, which affects the strength of the noise cancellation. If the design brief was to fit well and not look tardy, the Mobvoi get pass marks.

They’re only available in black, which is fine given that the colour should help mask any smudges the glossy finish might attract. The touch controls are marked by a slight indentation with playback, track skipping and voice assistance on the right, and ANC operation on the left. There’s mention of volume control, but that appears to be through voice operation – and getting it to work (if at all) is more of a faff than it ought to be. Regardless, touch control operation is snappy enough with few errors.

The charging case is in matching black attire, clamshell-shaped in appearance, and taller than you might expect; but its pocket-friendliness is helped by its slim frame. Having accidentally dropped it on concrete a few times, it survived with only a few nicks and scrapes, so it would appear tough enough to survive everyday use.

There seems to be conflicting information on the Mobvoi website about battery life, with seven hours or four-and-a-half hours the figure stated with ANC on. In my experience, I’ve managed to clock around three-and-a half to four hours before they’ve hit 30%, so it doesn’t take long for them to start running out of puff. The battery life gives the impression these are for brief bursts of use on the commute – and the only way you’re getting the full seven hours is with ANC off.

Noise cancellation eliminates lower-frequency sounds proficiently, as well as masking sounds in the mid-range (such as voices). Cars are reduced to a splutter; ambient noise is removed; voices are less discernible. What’s left are sharp, high-frequency sounds – an area most noise-cancellers have trouble defeating, and that’s no different with the Mobvoi ANC Earbuds.

The hiss and screeching sound of a train as it pulls into the station remains audible, but everything else is reduced effectively so. Given the price, I’d say these are earphones aimed at the commuter, and they’re a good fit for taming busier environments. For the price, this is a surprisingly effective ANC performance.

Cycling through the three sound modes on the left bud sends the listener through Quiet mode (ANC), Transparency mode (Soundpass), and ANC off. There’s no perceptible change in the audio performance between the three modes, simply just how much you hear of the outside world (or not). The Soundpass mode works to good effect, passing through sounds naturally and clearly. Given how cheaper earphones can suffer from introducing noise or artificiality, this is another win for the Mobvoi.

Voice assistants can be summoned with the “Hey Tico” keyword, there’s Bluetooth 5.0 support and, so far, connectivity has been fine in areas such as London Bridge – the only issue being instances where the signal would briefly stop and then resume. This usually happened walking on streets or at home, not in busy signal areas, which was odd. Audio streaming support goes to AAC.

There’s an app that accompanies the buds, and it appears there’s a different one for Android users than there is for iOS users (on Android it’s the Mobvoi-Smart life app). There isn’t much that can be done via the app other than toggling the voice commands on and off and checking battery status.

Call quality is inconsistent: the Mobvoi seem to pick up lots of noise or not much at all. Plus, when they do pick up noise, voices can obscure to the point where the person on the other end of the line couldn’t hear a word I was saying.

Expectations for sound aren’t often high with a set of cheap true wireless buds. “Compromise” is often the word used, and the Mobvoi ANC Earbuds do sound compromised.

It’s a sound that’s pitched quite broad and flat, in terms of peaks and troughs. The dynamism on show isn’t the most expressive. Tonally music tends to subscribe to a similar sense of rhythm and hue, regardless of the genre.

There isn’t much in the way of drive or energy – but, considering the asking price, it’s far from unlistenable; in fact, it’s likable enough. Bass is emphasised well, and unlike fellow affordable true wireless Oppo Enco Free2, low frequencies are varied. There’s weight and a fair bit of punch to the low frequencies, if that’s what you like.

The mid-range is rather thickly and warmly described, with little separation between instruments or voices. However, there is at least a decent sense of where they are within the soundstage. In Iggy Pop’s The Passenger, for example, cymbal crashes appear farmed out towards the edges, guitars located to the side of Pop’s voice, which is planted in the middle.

That soundstage feels small in scope, especially when there’s plenty going on. There isn’t a whole lot of definition, detail and clarity granted to instruments; but there’s enough to shape them and avoid the Mobvoi from sounding muddled and indistinct.

Vocals are enunciated smoothly and clearly, the Mobvoi just about able to keep up with the dextrous verses of Camp Lo’s Sparkle, although more definition wouldn’t go amiss. And the top of the frequency range is treated fine, good even; sharp enough to have impact, and just about enough tonal variation to engage. While the Mobvoi have their shortcomings, these aren’t unexpected for the price – and, as a pair of cheap wireless earbuds, they’re certainly more listenable than unlistenable.

If you want cheap ANC earbuds The noise cancellation impresses for the low price. If you’re primarily using earphones for travel, then give the Mobvoi a closer look.

If you use them frequently Battery is below average with ANC/passthrough modes, so if you’re using the Mobvoi frequently then they’ll need charging often.

I didn’t have much in the way of expectations with the Mobvoi, but I found them to be a decent pair of true wireless earphones. The performance must be viewed in context of the asking price. The audio is decent, as long as you’re not expecting much, but the ANC and Transparency modes impress.

If you’re not fussed by the short battery life then the Mobvoi ANC Earbuds have appeal at the lower end of the market. They’re worth checking out if you’re in the mix for cheap ANC buds for commuting.

Tested over a couple of weeks

What IP rating do the Mobvoi Earbuds ANC support?

The Mobvoi are protected up to IPX5, which means they can resist a sustained, low-pressure jet of water.

Only standard charging through USB-C is supported, which takes about 90 minutes from 0 to 100%.