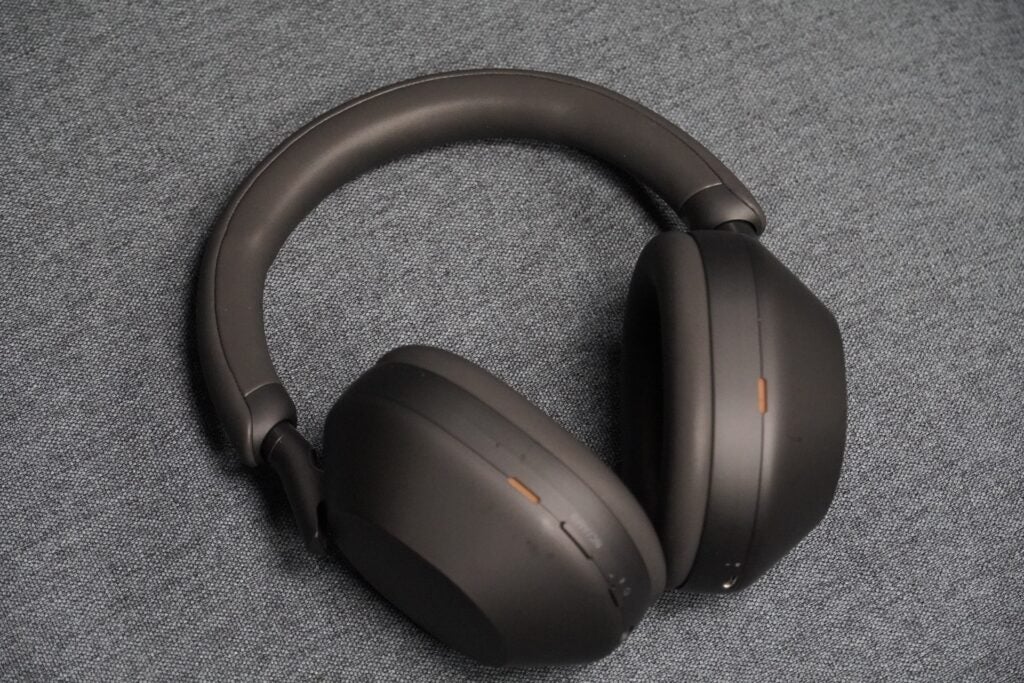 A new look, a sprinkle of improvements and a new price. Here are our first impressions of Sony’s WH-1000XM5 headphones

Sony’s WH-1000XM5 have been announced and they enter the market with a raft of changes: a new look, a new processor and tweaked audio performance.

We called the WH-1000XM4 the king of wireless noise cancellers when launched, and they were a satisfying improvement on the excellent WH-1000XM3. But can Sony return to the well and achieve the same trick with its latest headphones?

The WH-1000XM5’s worst enemy might actually be its predecessor. The XM4 set a high bar for other headphones to vault over. While there’s the usual marketing bluster with the release of a new headphone, Sony’s XM5 face quite the challenge. How can they improve on the best?

I have been listening to the headphones ahead of release and these are our impressions of it so far.

As you’ll notice the design has received the biggest change in a couple of generations for the 1000X series. It’s no longer foldable and collapsible, using a stepless slider to adjust the headband in a manner similar to Bose’s Noise Cancelling Headphones 700. The idea behind the change is to tidy up the appearance and remove the parts (such as hinges) that could amplify wind noise. The design is referred to as ‘noiseless’ and they definitely look sleeker and feel more modern in look.

The earcups are the same size but take on a more rounded and sculpted appearance and are positioned at a tweaked angle to improve the fit further. The space inside for your ears is less of a pointed oval, rounder and a bit wider but to me they felt a bit small.

My ears don’t quite slot inside, the new 1000X model doesn’t have that enveloping feel of the WH-1000XM4. Someone else on the Trusted Reviews team wore them (they have smaller ears) and felt they were more comfortable than their XM4 pair, so your degree of comfort depends on the size of your ear, really.

To my eyes there seems to be less padding on the earcups than before, which has the effect of the headphones sitting closer to your head. They are still very comfortable to wear, especially now that the headband features synthetic soft leather across the entirety of its frame, which cushions the head better.

There’s a new storage case that Sony says is collapsible, though this would be without the headphones inside, so the case can be flattened to take up less space during transport. It’s a bit bigger than the previous model as the headphones aren’t collapsible but like there’s an air of sophistication and premium feel to it.

There’s no change to the arrangement of buttons on the earcups, just what they are labelled as. There’s still the power on/off, but the ‘Custom’ button has been renamed as ‘NC/AMB’, so it’s not used to activate voice assistant but to manage noise cancellation. Black and silver are your only options for finishes, as is fairly standard with Sony.

All the features from before have carried over from the WH-1000XM4, so Speak-to-Chat that pauses music when you’re talking and restarts when you stop is onboard. There’s voice assistant integration from both Google and Alexa, the Adaptive Sound Control detects places you’ve been and automatically switches headphones settings to tailor the experience how you want it (like turning on ambient sound at the train station).

The Quick Attention Mode where you put your hand on the right earcup to allow sound to pass through stays, while there’s also Google Fast Pair and new for the headphones is Spotify Tap that offers quick access to Spotify albums and playlists, and they’re certified for Sony’s 360 Reality Audio that plays music in immersive 3D sound (available on Tidal and Deezer). Everything that featured on the older model is back again.

Battery life remains the same as before at 30 hours with noise cancellation on, despite the introduction of the V1 integrated processor on this model. On the WF-1000XM4, the V1 brought efficiencies all-round, in particular, it extended battery life. However, there are limitations to what the V1 can bring in conjunction with the HD Noise Cancelling Processor QN1, so while some things have been slightly improved, others, like battery life, remain the same. Without noise cancelling on, there has been a slight improvement, with total battery life bumped up to 40 over 38 hours.

The noise cancellation is an area where I have reservations. There are now eight microphones in total, four on each earcup in north, south, west and east positions to suppress sounds more thoroughly.

Sony says it has improved how it suppresses mid- to high frequency sounds, and this area concerns voices in particular. To my ears the XM4 deals with voices better than the XM5 does, making them more distant, but it does so with that noise cancelling tone that’s always evident with ANC headphones. The WH-1000XM5 are much cleaner and natural when they cancel sounds from the surrounding environment. I haven’t taken the headphones out too much to gauge how big a difference the XM5’s noise cancelling makes, so while it’s still very good, I’m not sensing that great an improvement in that area as yet.

The version of the Headphones app isn’t the full version that will come online ahead of launch, but Sony tells me that the noise cancellation will offer 20-steps of changing the performance (right now I see three options), so perhaps there’s room for hearing more of a change in the performance.

Elsewhere there’s Bluetooth 5.2 connectivity and so far, they’ve been rock solid, and there’s LDAC support, as well, for widening the bandwidth over Bluetooth to play higher quality tracks (like Qobuz or Tidal Masters). There’s multipoint support for switching between two devices at once but there’s no means of having multipoint and LDAC on at the same time, the headphones simply can’t support that amount of bandwidth. So when multipoint is activated, LDAC is deactivated.

The DSEE Extreme feature is an interesting one as it looks to upscale lower quality tracks by, in effect, remastering them on the fly and removing compression. The effect, Sony says, is most noticeable with higher frequencies, which leads into the next section…

The XM5 boast a new driver design and at 30mm, they’re actually smaller than before. There are improvements across the entire frequency range, but some are more subtle than others. Take high frequencies for instance, compared to the WH-1000XM4 there’s not a huge amount of difference to note, the performance seems to differ with each track I played. For some tracks the headphones brought out more detail, for others the XM5 seemed to be on a level playing field.

Another comparison with the Technics EAH-A800 and I actually feel the Technics best the Sony when it comes to high frequency performance. They sound sharper, clearer and are able to define and bring out the detail of the snare drum in The Smashing Pumpkins Cherub Rock better than the Sony can. But with some tracks the XM5’s seem a little better, offering just a little more detail. The improvements to high frequencies can be subtle to hear.

Bass, though, is much improved and elevates the performance quite a bit from the XM4. When Beyonce calls in the 808’s in Déjà vu, there’s a different textural quality to the bass beats that no other premium wireless headphone I’ve listened to can render. There’s plenty of extension and depth but it’s communicated in a natural, forthright way. The low end is a step up in my mind.

This is the case with the midrange too. Vocals are elevated and brought forward – similarly to how the WF-1000XM4 sound – and there’s greater dynamism and detail in the new pair. It’s a similar sound as before – the character of the 1000X remains in this model – and it’s terrifically rich and musical in its presentation. No other headphone has really matched the Sony in this regard, and they’re still top of the pile for sound alone.

There are plenty of upsides and a few downsides to Sony’s WH-1000XM5. They remain a great-sounding pair of headphones, and the audio tune-up they’ve received keeps them at the top of the pile. I still have reservations about the noise cancellation as it doesn’t seem as strong in some areas as before. But this might just be down to how the headphones fit around my ears.

The design may turn a few heads in both good and not-so good ways. They look more modern and svelte, but the lack of foldability may irritate some. A £30 increase in the UK doesn’t sound much given the changes made, but some will likely baulk at a price that’s much closer to £400 than it was before.

So far, the Sony WH-1000XM5 are evolution rather than a revolution.

Sony WH-1000XM5 vs Apple AirPods Max: How do they compare?