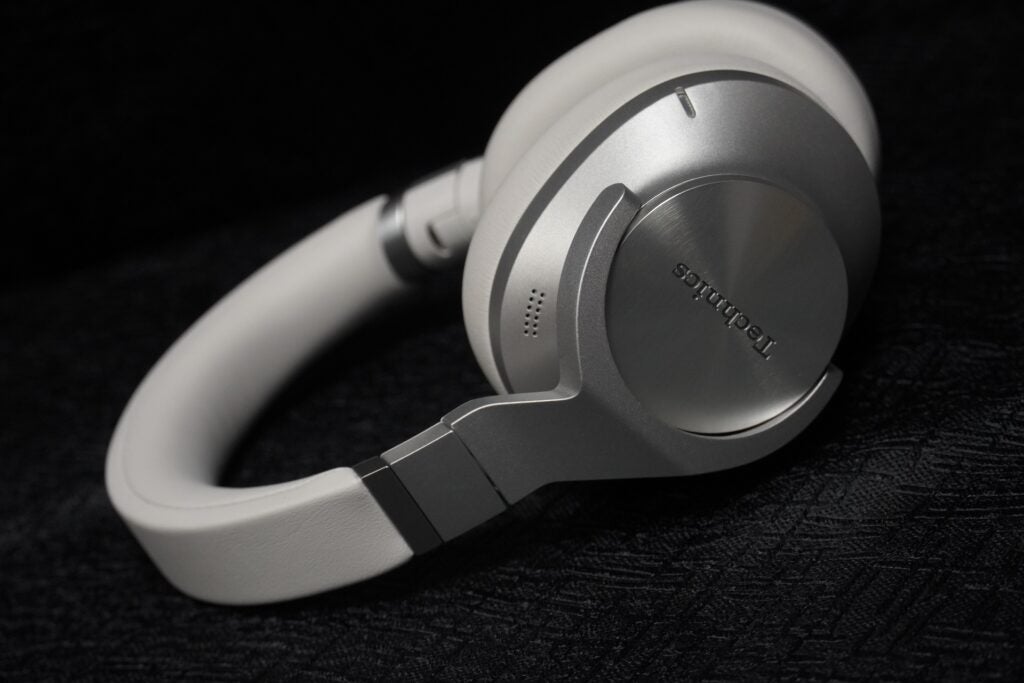 An impressive pair of noise-cancelling headphones, the EAH-A800 convince in all areas. They come stacked with features, the deliver high-quality sound, noise-cancelling is excellent, and the battery life is brilliant. The Technics are noise-cancellers of a very high calibre.


Bluetooth multipoint pairingConnect to two devices at once

Technics’ latest over-ear headphones were teased at CES 2021, and their arrival a year later has come in a fruitful period for premium headphones.

Bose launched its QuietComfort 45 towards the tail end of 2021, Bowers & Wilkins is prepping the PX7 S2, and Sony has brought out the WH-1000XM5.

And there isn’t much room to manoeuvre since the likes of Philips and Cleer Audio look to undercut those above with their more affordable ANC efforts.

Right from the off, the Technics EAH-A800 will need to get their elbows out and start scrapping. But where will they emerge in that battle – near the top of the pile, or with a bloody nose?

Available in black and silver finishes, the A800 look superficially similar to their predecessors. However, examine a little closer and you’ll discover that much has changed.

The hinges that connect the earcups and headband offer more rotation and leeway to adjust the fit. The padding on the earcups is less substantial and takes a different shape – less of a pointed oval and wider. For a person with bigger ears such as myself, the fit better encompasses my ears, and the padding doesn’t pinch my earlobes. These changes help make the EAH-A800 more comfortable to wear than the EAH-F70N.

The headband is longer, which makes the A800 bigger, too. The width of the band is thinner, with more padding on its underside, cushioning the top of the head more adequately. The clamping force is tight and secure, adjustable through the headband, so the cans stay rooted.

I’ve worn these headphones for stretches as long as three hours on multiple occasions, with only a few adjustments required to relieve any discomfort. At 298g, they’re heavier than the F70N and most of their competition, but they’re not headphones that weigh on the head; they feel relatively light in their construction.

The A800 are also collapsible, so if you want to keep them safe and protected, they can be carried in the accompanying hard case.

The arrangement of the buttons on the right earcup has been re-jigged. Volume control is no longer a toggle, but buttons with tabs to identify them. Betwixt the volume buttons is the playback button, where a tap stops and starts playback, a double-tap skips forward and a triple-tap jumps back. With the tabs on the volume buttons, I found it quick enough to operate the headphones without having to fumble for them.

There’s no longer a noise-cancelling button, with onboard controls for ANC moved to the touch sensor on the right earcup. The sensor has to be activated in the Technics Connect app before it can be used, and default controls are a double-tap to enable Ambient Sound mode and a double-tap to revert back to noise cancelling.

Aesthetically, I like Technics’ approach. The pearlescent aluminium finish on the petal of the earcup is attractive, and the engraved Technics logo speaks to its premium feel. These are headphones you’ll want to show off.

Thorough noise cancellationGenerous battery lifePlenty of customisation in the app

The Technics look great, are comfy to wear – but are they great at noise cancelling? Very much so, and I’d consider them among the top tier of noise-cancellers.

There’s a caveat, though: the Technics aren’t fans of headwear. The earpad cushions don’t like beanie hats or anything that could affect the area of contact between the head and earpads, which could reduce the noise-isolating seal.

Whip off the hat and things get very quiet. All I could hear of cars, vans and buses were the splutter of their engines and “whooshes” as they went past, while train journeys existed in a comfortable zone of silence, with most noises obscured.

People’s voices were handled just fine, too. With music on they were muddied enough that I couldn’t make out what two people next to me on the tube were conversing about; and the howl of the wind on the Jubilee line was tamed effectively. The level of suppression is good enough that music needed to be at only 50% volume during most journeys.

Compared to the QuietComfort 45, the EAH-A800 mask persistent noises better, such as the air conditioning on a train. Compared to the WH-1000XM4, the EAH-A800 conceal the various bumps during the journey a little more effectively, too. The Bose and Sony are slightly better ANC solutions overall; nevertheless, the Technics convince (as long as you take that hat off).

And the Ambient Sound mode isn’t half-bad, either. It’s clear and natural in tone, and while not all sounds get through, there’s plenty of detail to gauge where things are – and, happily, there’s no obvious change to how music sounds. Like the EAH-AZ40 true wireless, there are two ambient modes in the Technics Audio Connect app: Transparent, which lets sounds in; and Attention mode, which focuses on voices. Attention mode sounds more artificial, but it isolates voices fairly well.

Battery life is fantastic, and way ahead of other headphones I’ve tested at this price. On one occasion I used the A800 for 90 minutes, switching between ANC and Ambient Sound, and they were still at 100%. Used for three hours and they only dropped by 5%. Cheaper headphones, such as Cleer and Urbanista models, have often led the way for battery life, but the Technics are the first premium cans I’ve come across that achieve similar levels of endurance.

Technics quotes 50 hours with noise cancelling and streaming in AAC. With LDAC Bluetooth, which allows higher-quality streaming, it’s a hefty 40 hours – 10 more than the WH-1000XM4 or Bowers & Wilkins PX7, and nearly double that of the Bose QuietComfort 45. Fast-charging (if you need it) brings 10 hours from a 15-minute topup, while a full charge from dead takes three hours.

Bluetooth support is SBC, AAC and LDAC, so Android users with compatible phones will get the best experience. I’ve noticed zero connectivity issues walking around central London – just smooth streaming all the way.

The A800 come with Alexa built in, and calling her up is as simple as saying her name (music will pause as she waits for your request). The headphones won’t react if you whisper (I’ve tried), but even a slightly hushed request is picked up by the Technics’ microphones.

The Technics Connect app (Android and iOS) is packed with convenience and customisation. The homescreen displays the headphones’ vital statistics (battery life, streaming codec, noise cancelling strength), and there are equalizer presets (Bass+, Vocal, Treble+, Dynamic or off), as well as the option of creating your preferred sound through a five-band EQ.

The Connection mode mirrors Sony’s Headphone app, offering a choice over prioritising sound quality (LDAC) or the connection (where it’s fixed to SBC). There’s multipoint support for connecting the headphones to two devices simultaneously. Enabling multipoint doesn’t appear to result in LDAC being disengaged, but I’m double-checking with Technics on this.

More customisation is possible with the touch sensor operation, noise-cancellation optimisation, changing the levels of background noise reduced during calls, or conducting a test for call quality – handy, before those Zoom or Microsoft Teams calls. There’s even a tips/hints section, if help is needed.

The Technics score highly in a number of areas, but their overall performance would be rendered moot if they didn’t sound good – so it’s a good thing that they do.

They share similar sonic characteristics with the EAH-AZ40 true wireless, which means that out of the box, their sense of dynamism is a little diminished. Turn on the Dynamic EQ (which I used for the majority of this review), and the dynamic range is prised open and expanded.

Compared with the F70N, the A800 put in a stronger performance with bass. Voices come through with more clarity and inflection, while treble is presented with greater detail and sharpness. This serves to bring out instruments better, such as the shaking of the tambourine in Jon Batiste’s Naima.

The new 40mm dynamic driver succeeds in delivering more oomph to the bass regions and improvements to clarity, and they sound more spacious than the older model when listening to Ben Salisbury’s Plainsong from the Devs soundtrack.

Tonally, the Technics wade in the waters of neutrality, not quite reaching the musicality of Sony’s over-ears while also falling short of offering the level of sharpness of the Bose. They find themselves in a happy halfway house, and I’ve always found the top-end to be parlayed in a distinctively brighter and sharper fashion than on Sony headphones. The string orchestration in Nancy Sinatra’s You Only Live Twice always sounds clearer to my ears, while the snare drum that opens The Smashing Pumpkins’ Cherub Rock sounds a little more concise and easily identifiable among the guitars and drum kicks.

The mid-range is clear and loaded with detail, voices having a large presence in the soundstage. The clarity of those voices is, perhaps, a little emotionally cold; held up against Sony headphones, the A800 lack the smoothness and richness those over-ears deliver.

What holds the Technics back from five-star glory is that the WH-1000XM4 and WH-1000XM5 are a better all-round listen. The Sony offer deeper bass, a soundstage that’s wider and digs out more detail – the vinyl crackle at the beginning of Kendrick Lamar’s Alright is much more evident on the Sony. The A800 also lack the both the XM4 and XM5’s thump in the low-end, along with their energy and excitement.

I wouldn’t put them up to the level of the WH-1000XM5, but the differences are less a chasm and more a fissure, and in some areas they better the Sony. It’s the same story as it was between the F70N and the WH-1000XM3, and thus the Technics earn the same score.

For battery life that won’t quit The less you need to charge, the less money you’ll spend on toting the battery. That sounds like a money-saver to us.

There’s better sound for less The Technics don’t sound as musical as the Sony do, and the XM4 model is cheaper, too.

The Technics EAH-A800 offer a high-quality performance in all areas. The design improves upon the older model, noise cancellation is strong, and the sound is a step up, partly because of the EQ options available in the app. The wireless connection is superb, and the battery life is fantastic. They’re the model of consistency in terms of performance.

If I had to roll the die between the A800, Bose and Sony, the Sony would be the set of headphones I’d want – they’re cheaper, too – but the Technics would be my second choice. Its features are numerous and helpful, and there’s plenty of customisation on offer to tailor the performance. They pose some strong competition against Sony and any other contender that’s waiting in the wings.

Tested with a range music genres

Steve May
4 hours ago

What voice assistant does the EAH-A800 support?

Alexa is built-in to this model, so when activated Amazon users can say the Alexa wake word to bring the assistant up.