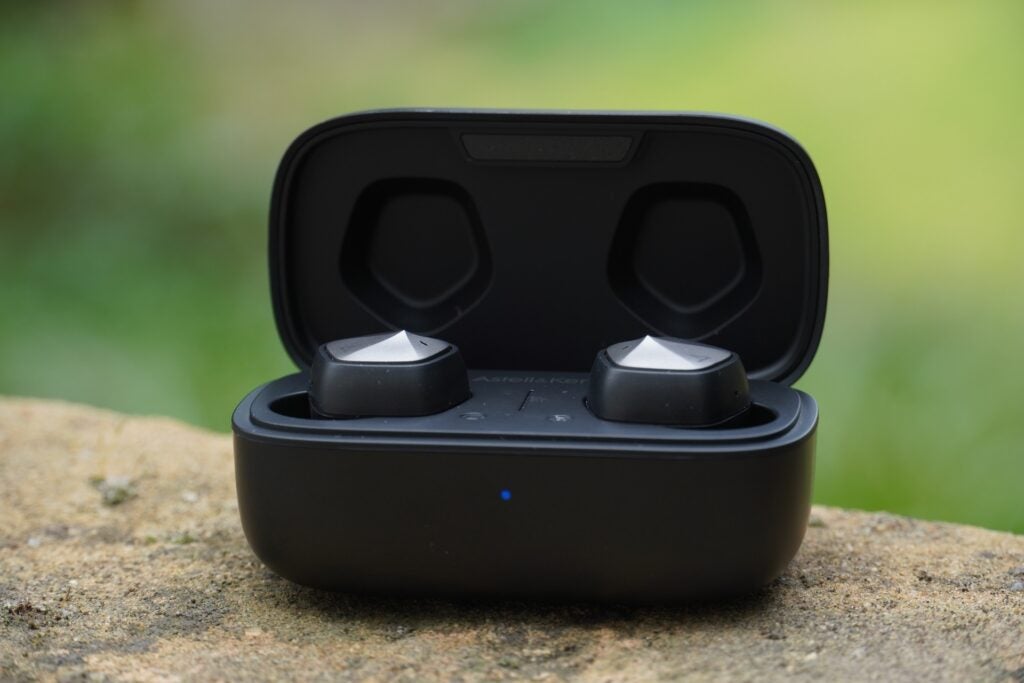 Impressive sound and super passive noise isolation, Astell & Kern’s first true wireless in the UW100 mark out the company as a competitor at the premium end, to the likes of Sennheiser and Sony. There are areas for improvement and the buds aren’t big on features, but they make it count where audio quality is concerned.

Astell & Kern’s assault on the audio market shows no sign of ceasing in 2022, with the AK UW100 its first attempt at a pair of true wireless earphones.

Of course, Astell & Kern has history in the headphones market with its premium in-ear monitors, but a true wireless pair is a different kettle of fish. Up against the likes of Bose, Sennheiser and Sony, this is a market where noise cancellation has grown in popularity, a feature the Astell & Kern buds forego for their “best-in-class” passive noise isolation.

More importantly, can Astell & Kern bring its pedigree for high-quality sound to an area of the headphones market where convenience and compromise are often watchwords? Let’s find out.

Like a plug in a sink, the AK UW100 block your ears with a tight seal that makes it difficult for passing sounds to impact your music sessions. Their dimensions are chunky and pentagonal, and while I wouldn’t call them uncomfortable to wear, they make their presence felt as soon as they’re placed into their ear. Nevertheless, I can’t fault the impressiveness of the noise isolation.

Having used them on the underground and walking in public areas such as the Southbank and Trafalgar Square, they put a stop to most noises that come my way. Their passive noise-isolating design targets sound in the high to mid-frequency range, and ambient sounds are diminished by a substantial amount. Wind noise is also curtailed very effectively.

While sounds still get through (a throng of people milling about, or musicians playing along the Southbank), not by enough to become a distraction, and when music is playing these sounds fade away even more. Five ear-tip sizes are provided, from small to XXL, to find the best fit, although surprisingly there’s no IP resistance for the buds, so they wouldn’t be recommended for gym sessions or use in wet weather.

The touch surface carries the Korean brand’s penchant for angular surfaces, light reflecting off the surface in a way that casts shadows. Like the Devialet Gemini, they don’t look as handsome as other products from Astell & Kern, lacking that shiny sheen I’ve come to expect; but they’re distinctive and striking in their own way.

The touch controls are responsive, despite the angular shape of the touch surface, with only a few prods – usually double- or triple-taps – interpreted incorrectly (the best place to press is at the point). Controls differ for each bud: the right handles playback and calls; the left deals with the Ambient mode and voice assistance. A long press on the left and right bud when audio is playing sends volume down or up respectively.

The charging case carries the same angular motif and is larger than most. Its rubbery underside is a clue to its wireless charging ability, while around the back is a USB-C connection. On the front is an LED that shows current charge at a glance.

There’s no active noise cancellation, a result of an issue encountered during the development phase, where ANC paired with the UW100’s audiophile-grade DAC led to a drop in sound quality.

But there is an Ambient sound mode with four levels of hear-through. It’s as impressive as the design’s passive noise isolation, with each level opening up the amount of sound that is let through. It’s clear and natural in the soundscape it creates, helping you to hear announcements or get a better sense of what’s around you in busy places.

Some of those incorrect presses on the touch surface do affect this particular aspect of operation. Sometimes, I’d tap twice to increase the level of awareness, but instead it would shut down the Ambient mode. It’s also rather unhelpful to not have a vocal prompt for the level you’re at – it can become difficult to remember where you were without consulting the app. Constantly double-tapping will cycle back one level, which is expedient.

The AK TWS app – available on iOS and Android – shows the battery life of the buds (but not the case), Ambient mode, touch controls and equalizer settings. There’s a degree of customisation provided for touch controls, a case of swapping settings from the left to right and vice versa. However, you can’t change the single-tap settings, which are play/pause or receive/terminating a call on the right and switching Ambient mode on/off on the left.

You’re given five options for equalizer in Default, Bass emphasis mode, High emphasis, vocal emphasis, and Game mode, which reduces latency between video and sound. There’s no means of creating your own custom preset, nor is there really more to the app other than setting up firmware updates. It’s a simple, logically laid out and accessible app for the features the UW100 offers. This isn’t a pair of smart true wireless earphones in the vein of Sony’s WF-1000XM4.

Bluetooth is 5.2 with aptX Adaptive support, and while the AK UW100 handled themselves well in most circumstances, in very busy signal areas they performed weakly. Wading through the concourse at Waterloo, the Bluetooth connection faltered to the point where every other word of the Mamas and Papas’ California Dreamin’ was audible. It was less problematic at other train stations, and generally stable at most other times. However, as aptX Adaptive is meant to keep the tether between the device and the earphones stable, it’s a disappointing development.

Also putting in average performance is call quality. Despite a dual-mic setup with a Voice Communication Package from specialist Alango, having made two calls with the UW100, the person on the other end complained of hearing sounds around me in busy areas, describing it as an amorphous blob that my voice was fighting to get through. In quieter areas it was fine, and while this isn’t an uncommon issue for true wireless earbuds, there are some – like the Jabra Elite 7 Pro – that perform to a higher level than the AK UW100.

Battery life is stated as six hours per bud and 24 hours in total with the case. My expectation for battery life would have been slightly higher given the lack of active noise cancellation. Playing music in High emphasis mode for an hour took a shade over 20% from the battery, so presumably that mode uses more power. There’s wireless and fast charging, with the latter offering an hour of battery life from a 10-minute charge.

Powered by a dedicated AK4332 high-performance 32-bit DAC and packing Knowles Balanced Armature drivers, the AK UW100 certainly had me rubbing my hands in anticipation with regards to their sound.

On the default EQ there’s a solidity and heft to the sound, good detail and definition of voices and instruments; but it isn’t the most eye-catching performance. Dipping into the app and playing with the EQ settings, the High emphasis mode brings out better performance.

With High emphasis on, there’s a better sense of depth, vocals projected forwards, while other high- to mid-range instruments are brought forward and defined with an improved sense of distinction and depth to the stereo image. High frequencies sound more distinct and crisp in tone, and the soundstage is spaciously conveyed. Bass in this mode is punchy, but doesn’t display as much depth as others – Bass emphasis produces a warmer sound, while Default is the best balanced of the lot.

The High emphasis mode become my preferred mode of listening over the course of using the AK UW100, since it felt more like the sound I’d expect from a Astell & Kern device. The Default EQ is very listenable, though, and is the smoothest in terms of definition. That helps in describing vocals, where on the High emphasis mode the earbuds skirt with sibilance at times with Sting’s lyrics in Shape of My Heart.

Rhythmically, the buds deliver a flowing performance with Missy Elliott’s 4 My People, maintaining the toe-tapping beat throughout the song with a likable sense of energy and propulsion. Detail levels are similar to the Sony WF-1000XM4, but I’d say there’s more overall clarity and subtlety from Sony’s true wireless earbuds.

Bass output is delivered in a measured manner (unless you opt for the Bass EQ) in Eminem’s Say What You Say, with good levels of power and a nice sense of punchiness. However, to strike a contrast with the WF-1000XM4 again, the separation between the mids and bass is better handled on the Sony, again edging the Astell & Kern in terms of clarity.

It’s a similar result with the high-frequency notes in GoGo Penguin’s Raven and Naima’s Love Song by Jon Batiste, with the WF-1000XM4 eliciting slightly more clarity, detail and precision, delivering the more vibrant performance. There isn’t a huge difference, but what there is puts the Sony on a level above the Astell & Kern.

For their simplicity The AK UW100 aren’t inundated with a wealth of features, focusing on design and sound with an Ambient mode that offers awareness when you need it. They’re easy to operate, which is to be appreciated.

If you want ANC The price at which the Astell & Kern enter the market is higher than models with ANC. Bose, Sennheiser and Sony are cheaper, and the Sony performs better on the audio front.

Astell & Kern’s first true wireless buds are a compelling pair, putting in an astute, clear and natural audio performance. Their passive noise isolation blocks out sounds impressively to keep the outside world from invading your music playlist, and the Ambient mode brings clarity and awareness for those who want to be engaged with the world around them.

There are areas for improvement, such as Bluetooth connectivity in busy areas and call performance, while some may find the way they fit into the ear a little too blunt. If what you want is high-performance sound without the gubbins of smarts, the UW100 are a high-quality choice.

Steve May
1 month ago

Do the Astell & Kern UW100 feature an IP rating?

There’s no IP rating for these earphones, so we wouldn’t recommend using them for exercise or for use in wet weather.