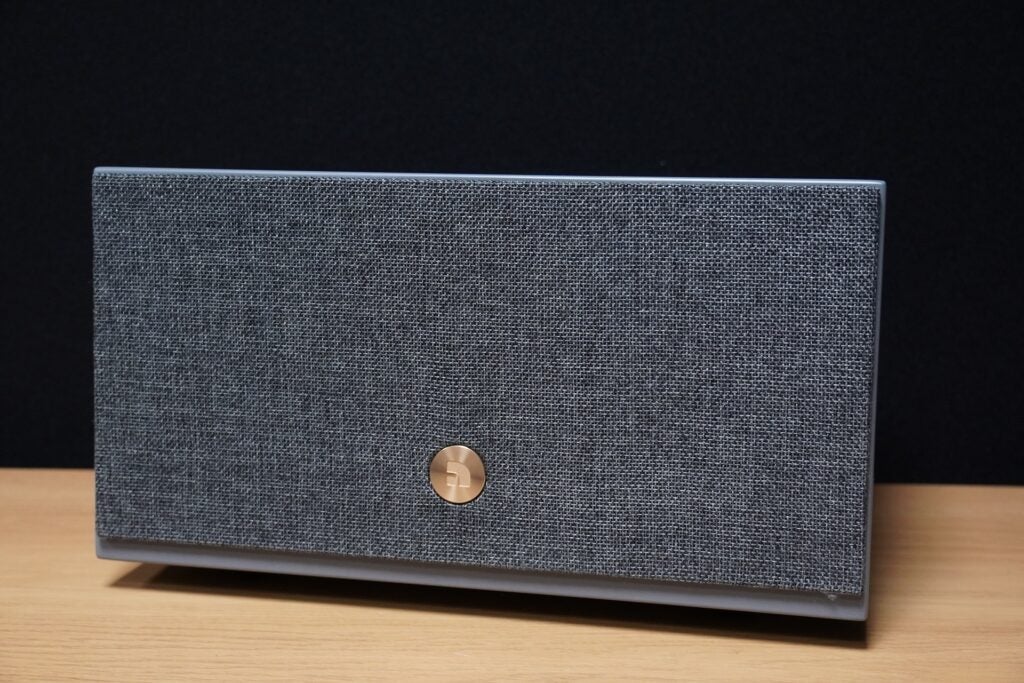 An energetic and powerful wireless speaker from Audio Pro that plays nice with other speakers in the Apple, Google and Audio Pro’s own ecosystem. Its sound could use a touch more clarity and definition; but on the whole, Audio Pro has delivered a very entertaining wireless speaker in the C10 MkII.


Music streamingStream direct from range of music services in app

The C10 MkII is yet another speaker in Audio Pro’s lineup where the sequel has been updated to expand its wireless and multi-room capabilities.

In short, whether you’re an Apple fan, a Google fan or Audio Pro fan, the C10 MkII looks to play nice with whatever ecosystem you’ve bought into, sitting within a multi-room setup where you can group speakers together to form one big, house-spanning sound.

We’re fans of Audio Pro here, awarding the G10 our best multi-room speaker award in 2021. Can the C10 MkII usher in a similar result?

The C10 MkII is big by wireless speaker standards, measuring 166 x 320 x 180mm (HWD). At 3.9kg it’s a hefty unit, too, but its size and weight do give the impression of strong build quality.

The sample in for review was grey, but black and white options are available, too. The grey version is probably the most distinctive of the trio, with its gold accents for the Audio Pro logo and the controls on top of the unit. In addition, the feet it rests on slant upwards to help fire audio into a room.

There’s a change from the original model with a detachable magnetic fabric grille, so you can choose between the koala-esque look of the speaker drivers looking at you, or the tasteful mesh grille that’s easily plied off. The speaker also no longer has a handle, which does make lifting and placing it more physically taxing.

The top surface of the unit is home to the control area that comprises volume and playback buttons, source selection, Bluetooth pairing and power on/off. There’s a selection of six presets – more than the original offered – so users can jump straight to sources they use most often, without having to open the apps themselves. Right at the bottom sit three LED indicators to show the source the C10 MkII is connected to (Wi-Fi, Bluetooth, Line) at a glance.

Around the rear is a bass port, which implies parking the Audio Pro close to a wall will help get the best bass performance from the speaker. Physical connections are also on the rear and include RCA for hooking the speaker directly to another source such as a turntable or CD player, while the sub-out can, for example, be used with Audio Pro’s subwoofer range, if you want to keep things in the same family. A reset button and USB service port are the other features to take note of.

The C10 MkII supports Apple’s AirPlay 2, Google Cast and Audio Pro’s own multi-room solution to group speakers together. With AirPlay 2 you can cast to the speaker from iOS devices (say, an iPad), Google Cast for music streaming services such as Qobuz and Tidal. The Audio Pro Control app has the music services integrated; simply sign into whichever service you’re subscribed to.

What all this means is choice, choice to stream music how you want and to whatever speakers you have dotted around your home (if they’re compatible). If you have a selection of Audio Pro speakers, they can be grouped together with a “master” unit leading the way. For example, via restreaming you could connect a turntable to the master speaker and then have the record spool off to other Audio Pro units that are grouped together.

Visually, the Audio Pro Control app is a functional effort; but since it does what it’s meant to do, I’ll take simplicity and ease of use over flashy aesthetics. Music streaming integration includes TuneIn, Tidal (and also via its Connect service), iHeart Radio, Napster, Qobuz, vTuner internet radio, Deezer, Amazon Music and general internet radio (such as BBC Radio 6 Music). Spotify is available through Spotify Connect over Wi-Fi.

Click on the Google Home icon and it whisks you away to the app to set up the speaker within the Google ecosystem. Elsewhere in the app you can select sources, plus manage the six preset options and any other connected Audio Pro speakers.

Dig deeper into the app and there’s the possibility of synchronising the sound on (Audio Pro) speakers, setting up an alarm clock, seeing the strength of the speaker’s Wi-Fi connection, and fiddling with the stereo performance to alter the bass and treble settings for the speaker (-5 to +5). Just click on the icon that looks like a cog in the “Device” section.

Other features include Bluetooth 4.2 and file support for MP3, AAC, WMA, FLAC and Apple Lossless. I found it tended to lose connection with my smartphone more often than I’d like, especially when using Tidal Connect – and, similar to the G10, I sometimes wasn’t able to find AirPlay connection from my iPad Pro.

The Audio Pro C10 MkII’s sound is a weighty one, with plenty of energy fired from the two tweeters and long-throw woofer. Bass performance is big, but I wouldn’t describe it as offering huge amounts of depth. Nor is it a performance that extends out into a room; it’s more punchy and solid in its tone and delivery.

With its rear bass port, it’s worth chewing over the speaker’s placement, preferably with its back to a wall than out in open space. When it’s positioned with a surface behind it, bass is defined better; overall, the speaker exhibits a tighter focus, with improvements to clarity and detail, along with a tidier organisation of the soundstage.

Let the Audio Pro rip and she delivers a powerful, fluid and energetic performance. The top-end is perhaps where there’s a little room for improvement; it’s detailed and clear, but not the brightest sounding. But with Takuya Kuroda’s cover of Everybody Loves The Sunshine, the speaker does deliver the cymbal crashes with a nice crispness.

PLlaying the Main Title from Bear McCreary’s Foundation, there’s a zest to the C10 MkII’s performance. However, it doesn’t short-change on the subtlety front either; the speaker captures the sweeping and fluid transitions between quieter and louder moments well and bass hits solidity. One complaint is that while the MkII’s delivery sounds big, it’s conversely one that doesn’t escape the confines of the cabinet. Is it a problem? With some tracks it can feel a bit bunched up, as I’ll get to below.

Vocals are delivered smoothly enough in Takuya Kuroda’s Fade (feat. Corey King) and Do No Why, although the C10 MkII feels like it slightly struggles in describing compositionally more complex tracks, especially in their more energetic moments.

While King’s voice takes prominence in Fade, other elements in the soundstage can feel slightly obscured, as if they’re not granted enough space. There’s also a sense that there isn’t much depth to the soundstage. Music sounds flat as instruments and vocals lie next to each other; the C10 MkII doesn’t quite sift through dense tracks with enough clarity and definition.

With less complex tracks the Audio Pro C10 MkII settles into a better groove and flow. I’m Tired from the Euphoria soundtrack features expressive main and backing vocals, and having to deal with less instrumentation seems to allow the C10 MkII to wring out more clarity and definition from Labrinth’s and Zendaya’s vocals.

Its rhythmic ability with Jon Batiste’s I Need You shows that the C10 MkII is plenty capable of capturing the jaunty energy and flowing nature of the track in a toe-tapping, fun manner. A play of GoGo Penguin’s Raven, the piano notes are clearly described, the bass is convincingly delivered. The fast and fluid interplay of the track’s drumbeats and twinkly piano combine to good effect, showing the speaker’s neat and tidy feel for timing.

Its Bluetooth playback compared to Wi-Fi sees the latter easily win out, offering greater clarity and shine at the top-end and a stronger presence with the low frequencies that results in a more dynamic performance. Fireflies/Alexandra Prince’s I Can’t Get Enough is more spacious and detailed over Spotify Connect, so Wi-Fi is the preferred option for listening. Although, bear in mind that Chromecast still can’t seem to deliver MQA-encoded tracks such as Tidal Masters, dropping down to CD quality instead.

For its brash, energetic tone There’s plenty of power and energy to the Audio Pro’s C10 MkII’s sound, and decent levels of detail and definition, too. Plus, the speaker doesn’t skimp on the bass.

If you want a more refined sound The C10 MkII lacks a degree of sharpness and definition. Its energetic delivery means it doesn’t quite extract every drop of detail from music played.

The C10 MkII is another very entertaining wireless speaker from Audio Pro, producing an energetic, fun and powerful performance with a good deal of bass. Stylish looks, expansive multi-room options and support for both physical and wireless connections give it versatility, and the Audio Pro Control app is well-featured – although it could do with a visual facelift.