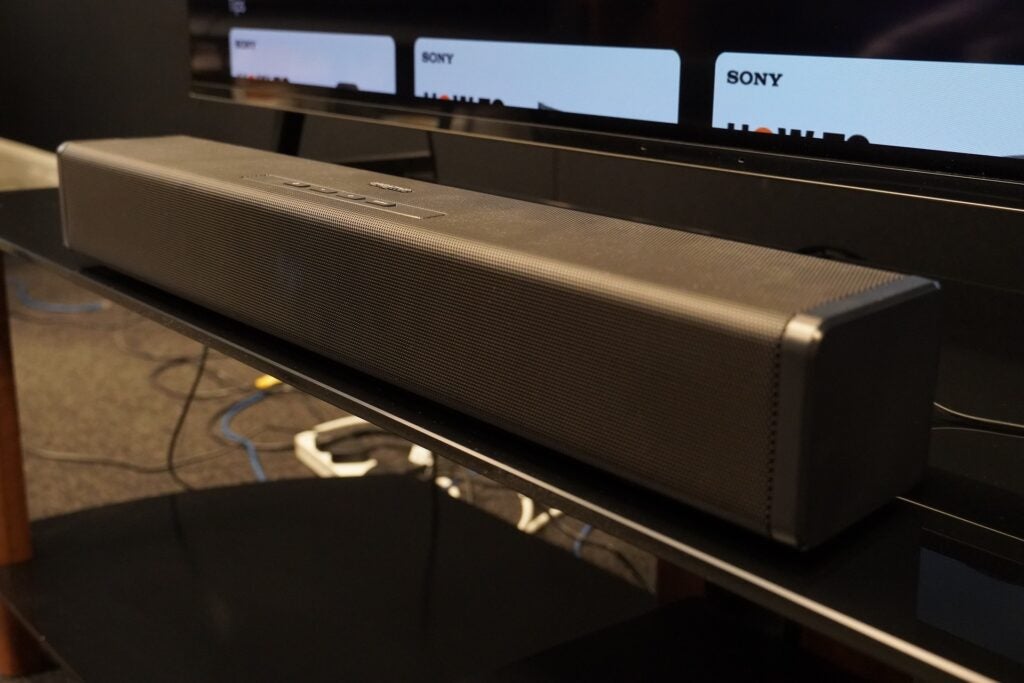 The Creative Stage 360’s 5.1.2 Atmos ambitions are overstated, but it’s a decent compact soundbar capable of strong bass. However, it can be rough around the edges, with bass that overspills into hardness with some content.


SoundSupports Dolby Atmos in a 5.1.2 setup

Creative Labs broke onto the scene with its Sound Blaster PC cards and personal music players in the 1990s, and since then the Singaporean-based company has branched out with an increasingly broad range of products.

I wouldn’t have necessarily pegged it as a soundbar manufacturer, but the company now offers a number of options in its range, including the Stage 360 Dolby Atmos soundbar.

At £199, it’s one of the cheaper Atmos models on the market. However, the Stage 360 isn’t a true up-firing effort; it’s a bar that simulates an immersive audio effect through digital processing. And given its compact and slim design for both the main and subwoofer units, the Stage 360 could make plenty of sense for those for whom space is at a premium, or even bedroom gamers.

The Stage 360 is only 565mm wide, making it a good fit for those who sit fairly close to their screen or monitor. A tall and slim subwoofer partners the unit, offering a front-facing port that can sit either side of the main unit without taking up much space.

The front-firing port on the subwoofer should also provide a degree of flexibility in terms of positioning, but you also need to take into account that this is wired to the main unit; it isn’t a wireless effort.

Aesthetically, there isn’t much to say about the Stage 360’s looks. It’s a functional piece of home cinema design: the rectangular shape, acoustic grille and drab black exterior doesn’t scream “look at me”. For those with no fashion interests, the Stage 360 will fade into background and let its sound do the talking.

There’s a bright display smack-bang in the centre of the mesh grille, which looks basic, whether it’s because there’s only space for three characters or that the lettering looks a little crude – the type of font you’d see on the screen of a Casio calculator.

On top are power, volume and source buttons, which continue the theme of “basic” looks, with the power button pulling double duty – a double-tap initiates Bluetooth pairing. On the underside of the soundbar is an area where you can attach a pair of rubber feet that elevate it five degrees so audio can travel directly towards ear level if you’re around 1m to the bar.

HDMI 2.0 connectionsA choice of Near and Far modes to optimise sound2.1 system into a 5.1.2 Atmos setup

There are several modes available, but it’s better to explain them in the context of two groups. Listening modes comprise Cinema, Music, Night and Wide; Night reduces the general volume and bass output, while Wide expands the sound field.

Near and Far relate to the soundbar’s performance at different distances. Near refers to near-field positioning, maximising the soundbar’s output if you’re sitting within 1 metre. Far does the same, allowing the soundbar to optimise its performance for larger rooms if you’re sitting 3 metres away from the Stage 360. You can change these modes using the supplied remote, through which you can also adjust bass and treble levels (-6/+6).

Connections can be found around the rear of the soundbar and stretch to an HDMI ARC port (no eARC), two HDMI 2.0 inputs for connecting, say, an Xbox Series console or PS5, an optical input plus a port for connecting the subwoofer. There’s also a Bluetooth 5.0 wireless connection with support for SBC, which is the lowest-quality Bluetooth codec available.

The driver setup sees the main unit make use of two 2.25 x 3.85-inch custom-tuned racetrack drivers; the subwoofer has a 5.25-inch, high-excursion driver. With 60W pumped to the racetrack drivers and 60W to the subwoofer for a 120W power output, Creative says the Stage 360 can reach a peak output of 240W – a substantial amount, given the number of speakers at its disposal.

Creative claims its 2.1 configuration can produce a 5.1.2 Atmos soundstage, which is ambitious to say the least, especially without any dedicated up-firing drivers for the height channels. The Stage 360 creates its immersive soundstage via digital processing, which can be effective but not as potent as up-firing speakers.

What’s impressive about the Creative Stage 360 is the degree of bass and punch it offers. That bass can become coarse and unsubtle at times, but if you like low frequencies with power and explosiveness then the Stage 360 is only too happy to deliver it.

When bass hits hard, however, it does the Stage 360 little favour with some content. Bassy male voices sound overcooked; the hard-boiled vibe of Hugh Jackman’s Nick in Reminiscence is a little leaden in description, and it’s a similar effect with Sapper and K’s dialogue in Blade Runner 2049; their voices presented with a rigidness that lacks subtlety.

At least with 2049’s Atmos soundtrack the soundbar survives relatively unscathed, and with some credit in the bank. There’s no notable distortion or crackle, with the bass notes that sound over the opening text intro delivered with good solidity and weight.

At the other end of the frequency range the Stage 360 is bright and sharp, with no harshness or hardness present in the piano notes of Hans Zimmer and Benjamin Wallfisch’s Blade Runner score. Kong vs Godzilla is another heavyweight soundtrack, with the Stage 360 hitting those deep notes emphatically, the vibrations from the subwoofer so strong that a remote next to the bar slid off the TV rack.

Height effects in 2049 are treated fine, but as an Atmos bar the Stage 360 isn’t the most convincing. A good early test of the Stage 360’s immersive capabilities is at Sapper Morton’s farm in Blade Runner; while the descent of K’s spinner starts above the TV, the sound effect as the spinner throttles down isn’t pressed home with much detail.

I also wouldn’t describe the sound that comes forth to be room-filling or expansive – but you certainly get lots of energy and power. Dynamically, it doesn’t shift gears with particular fluidity, with not much variation between the loudness of action sequences in The Force Awakens and the dialogue scenes.

Switching to the Wide mode doesn’t seem to widen the soundstage; it simply makes certain details louder, which causes the bar’s performance to lose a degree of shape, presenting some of that hardness again.

In general terms, there are good levels of detail and sharpness wrung from films and TV. The screeching sound of K’s bassline in the “interlinked” scene from 2049 hits the right tone, while in a later scene, when K and Joi go out to the rooftop, the soundbar brings to bear a decent sense of ambience and atmosphere as the rain pings off metal surfaces. However, like many aspects of the Stage 360’s sound, it’s heavy-handed rather than subtle.

Dialogue is treated with clarity, but there can be a slight sibilant edge with some content. Mostly there’s a smoothness to the various accents in Netflix’s The Dig, while watching Peaky Blinders on iPlayer, the West Midlands’ accents are lent a natural enough air and feel – although another try of the Wide mode brings a degree of hardness and a hint of sibilance to the dialogue. This mode sounds a little too processed to be natural.

With music the Creative Stage 360 is an enjoyable little performer, despite supporting only SBC Bluetooth playback. The strong bass levels work well when combined with its solid grasp of detail and good clarity with vocals. Again, though, dynamically it isn’t the most fluent, with the difference between highs and lows muted.

If you want an Atmos gaming bar This isn’t an area touched upon much in the review, but the suspicion is the Stage 360 is more suited to near-field listening with a gaming console of choice by your side than big-screen TV viewing.

The Creative Stage 360 is rough around its immersive edges. It delivers punchy bass (perhaps too much at default levels), decent clarity and detail; but the Atmos effect is overstated. If you think of it as more a 2.1 soundbar than one capable of immersive spatial sound, it will keep your expectations grounded.

Tested with film, TV and music

Does the Creative Stage 360 comes with a wireless subwoofer?

The subwoofer unit is wired to main unit, so it isn’t a wireless sub.