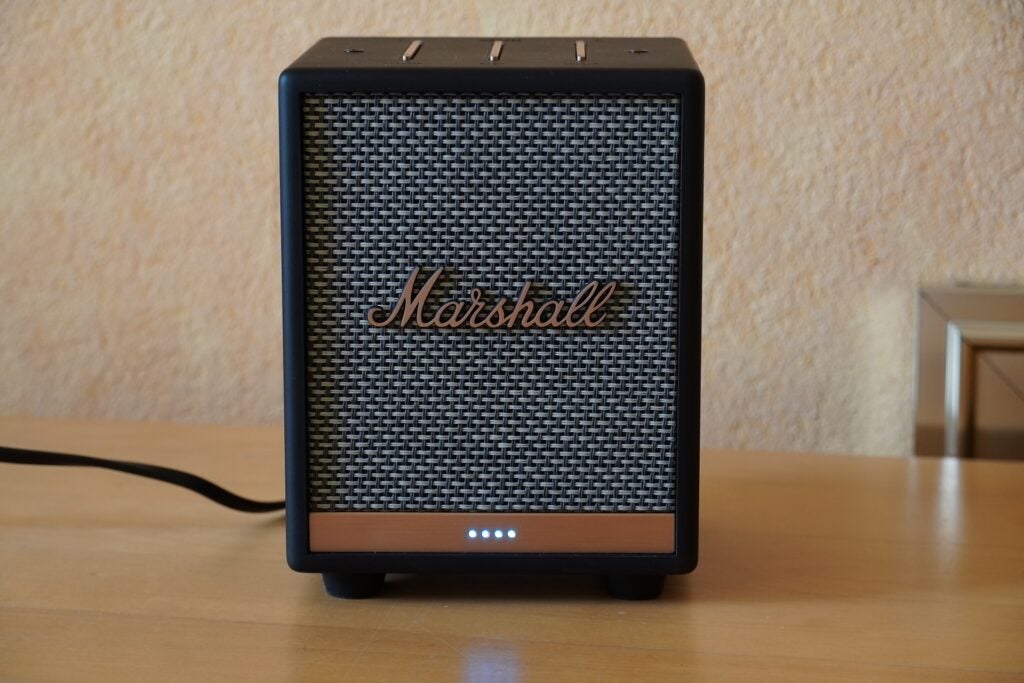 The Uxbridge Voice achieves Marshall’s goal of delivering big sound from a compact form, but it’s outperformed at this price for sound. Features are good, as is connectivity, and if you’re waist-deep in the Alexa ecosystem the Uxbridge is a fun and appealing alternative to Amazon’s Echo speakers

Small soundstageNot the most nuanced of performers

The Uxbridge Voice is an Alexa wireless speaker from Marshall and holds true to the English proverb of big things coming in small sizes.

It’s a small, stylish speaker that Marshall describes as a compact sonic powerhouse, and with smarts in Alexa you can summon your favourite tracks without having to lift a finger. Ready to rock and roll?

Unlike Marshall’s Stanmore II Voice, you won’t need to clear out space to accommodate the Uxbridge. Though it looks bigger than the Sonos One, it’s actually only a fraction larger in all dimensions.

Closer inspection reveals the construction of this speaker is a step down from the Acton II and Stanmore II Voice. The faux-leather finish of those units is replaced by a less fetching, hard plastic enclosure. The size of the cabinet also impacts the spread of sound, but more on that later.

The rotary dials for volume and equaliser on the top panel from those bigger models are also gone, replaced by guitar fret-styled controls with play/pause and Alexa buttons on either side. Around the rear is a Bluetooth pairing button, and you can also switch Bluetooth on in the Voice app.

At the foot of the speaker’s front is a four-button LED that signals Alexa. It flashes blue when Alexa is engaged, yellow if she has a notification, and white whenever the volume is adjusted. Hold down the Alexa voice button for a few seconds and it turns the built-in microphone off, the lights switch to red to indicate Alexa can’t be reached.

The Uxbridge Voice is a fine-looking speaker – less alluring than its bigger siblings and some may find it looks gimmicky, but it does have more character than the legion of black-and-white efforts.

Setup is a doddle. Park it near the mains, plug it in and wait for the voice instructions to guide through the set-up process. The Marshall Voice and Amazon Alexa app need to be downloaded, the former establishes a Wi-Fi connection, and the latter ensures Alexa voice control. It’s done with helpful chimes and assistance from the (loud) voice that emanates from the speaker.

Despite the low ratings on both iOS and Google Play stores, I haven’t experienced any issues with the Voice app. It’s easily navigable, offers some customisation and in-app playback. It does what it needs to do.

Treble, bass and volume can be tweaked via the top panel, and through slightly more extensive EQ settings and presets found in the Voice app. However, customising the bass/treble on the top panel doesn’t have a profound effect on the speaker’s character and neither did switching between EQ presets in the app.

Alexa is responsive even when addressed from across the room, playing music or when she is having to compete with other noises. The built-in microphones picked up my voice easily, and when you ask for assistance during playback music pauses instead of being ‘ducked’ (volume reduced).

Alexa goes beyond simply playing your favourite music with integration with smart home systems such as Hive or using the speaker to control a Ring doorbell system. She can also be linked to several music streaming services including Amazon Music, TuneIn, Spotify Connect and Apple Music for quick access to music.

Connectivity is Bluetooth 4.2, which is nowhere near the most recent, and there’s of course Wi-Fi that allows for AirPlay 2 and Spotify Connect. I did have issues when connecting to an iPod Touch over Bluetooth, the Uxbridge would connect and then disconnect, which is not an issue I had with either an iPad Air or Huawei P30 Pro.

Multi-room is possible with other Alexa or AirPlay 2-enabled speakers, and the Uxbridge has been updated to support multi-room with Amazon Echo speakers within the Alexa app.

With the Uxbridge, Marshall has said it was pursuing a balanced performance – but I’ve found it to be a rowdy and energetic sounding speaker and not one that’s ‘balanced’.

That isn’t as much of a negative as it might come across at first. If lashings of fun and energy floats your boat, you’ll enjoy the Uxbridge’s performance. Compared to the Audio Pro A10, which is still available for a similar price, it lacks that speaker’s detail and musicality.

Due to the cabinet’s size, the Marshall’s delivery doesn’t produce the widest soundstage but room is made for vocals with Erma Franklin’s voice in Piece of My Heart coming across well, even if it lacks the nuance heard on the A10.

But the Uxbridge does have the better of the Audio Pro in some areas. For one, the size of its sound feels bigger, and it is discharged with an energy the A10 can’t match. It’s a delivery that works well with energetic tracks, especially rock and roll, its character suits the flowing nature and beats of David Bowie’s Let’s Dance or Gary Numan’s M.E. with its growly guitar and synthesised instruments.

Bass is another area where the Uxbridge has a confidence that belies its size. Drum hits from Kamasi Washington’s Street Fighter Mas hit well to the point where I could feel the bass travel through the table.

Treble is smooth, but there isn’t much headroom for it to stand out. Overall mid-range performance seems to suffer from its cramped soundstage, the Uxbridge Voice unable to extract as much detail. This has a knock-on effect on clarity and separation of instruments and voices, and compared to the One SL, the Sonos is better balanced and natural in tone.

The Uxbridge doesn’t need much of an excuse to go loud, but the difference between low and high isn’t all that much. Nudging it above half-way seems a tad excessive unless you want to annoy those nearby. Using AirPlay 2 as the source offered a slightly more relaxed performance, introducing a little more subtlety to the mix. Regardless, this is a fun desktop speaker for those who like their music with plenty of energy and dynamism.

You’re in the Alexa ecosystem Not all Amazon Echo speakers are proficient when it comes to sound, and the Marshall Uxbridge’s rock ‘n roll aesthetic gives it a distinctive personality.

You want better sound There are better-sounding alternatives, especially if the Alexa integration doesn’t pique your interest.

An energetic but not the most nuanced of listens, the Uxbridge is an entertaining Alexa compatible speaker but falls short of matching the best, such as the Sonos One.

You do get multi-room support with Marshall, Alexa and AirPlay 2 speakers all supported, with an update now providing multi-room with Amazon Echo speakers.