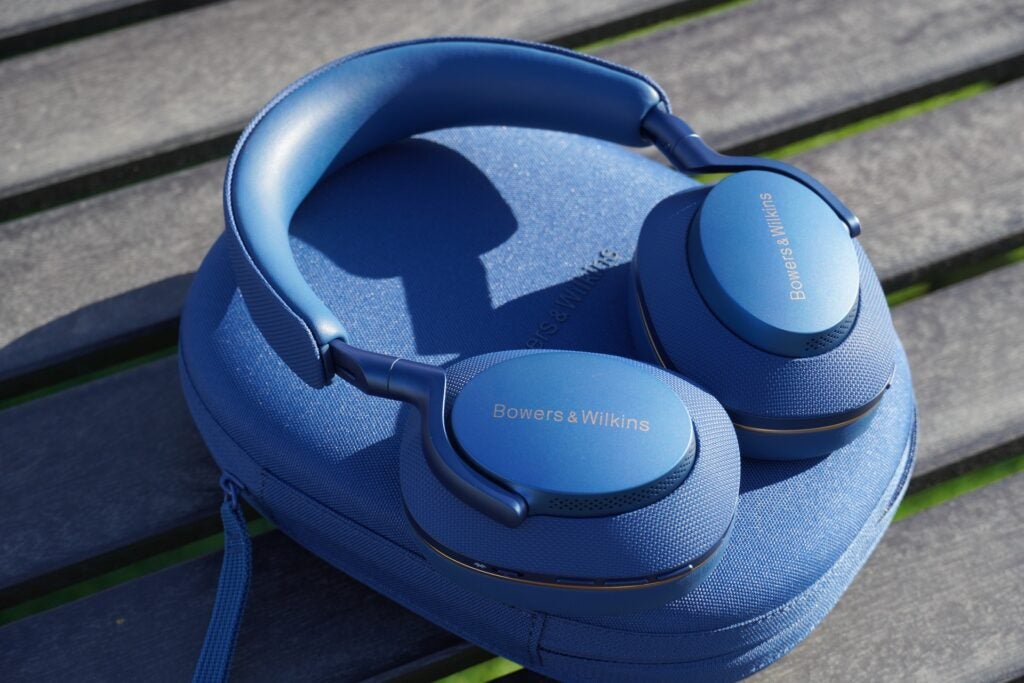 Excellent sound, terrific wireless performance, great aesthetics and effective noise cancellation – the Bowers & Wilkins Px7 S2 headphones improve upon the PX7 in a number of ways. Sony and Bose beat them for noise cancellation, but the Px7 S2 offer one of the finer listening experiences at their price.

In terms of when and how you announce your latest headphones, an image at the bottom of another company’s page isn’t the pomp and ceremony you’d be after.

But that’s exactly happened to Bowers & Wilkins’ Px7 S2, which were outed earlier in 2022 on Qualcomm’s website. But little did we know that B&W had another card to play, with the announcement of the more expensive and higher-end Px8 coming later.

That might lead some to believe that the Px7 S2 are the entrée to the main course, but that isn’t how B&W is treating them. These headphones sport a sleeker, slimmer look over the PX7, benefit from a revised noise cancellation algorithm and a new app. But they face competition, chiefly from the Sony WH-1000XM5.

Classy and luxurious are adjectives this website has often used to describe Bowers & Wilkins headphones, and the Px7 S2 don’t fall far from the tree. From the PX there’s been a consistent through line: the sculpted metal arms, and earcups with fabric finish with aluminium Deco plate and oval shape. As a silhouette, the Px7 S2 take on an elegantly styled shape.

I’d say they have more in common with the PX than the PX7, but since the latter is their immediate predecessor, the changes made bear rewarding fruit. The fit is less cumbersome; the clamping force is better. The headband is actually wider, a change I think will help the Px7 S2 fit a wider range of heads. Despite the changes, the Px7 S2 weigh only 3g less.

But it’s more about how they feel, and these headphones are less taxing to wear over longer periods. They’re more visually arresting than the WH-1000XM5’s minimalist looks – the blue colourway with gold trim is sleek and premium.

They can’t be collapsed inwards but can be folded flat and placed in the accompanying storage case. B&W says the case is slimmer than that of the PX7 – it’s slightly slimmer, but also slightly taller. There’s at least a better integrated pouch for storing cables.

B&W sticks with physical buttons, but they’re not quite as obvious as they were on the PX7. The right earcup is home to a power/Bluetooth pairing button – flick up to power the headphones, or push in further and hold to place the headphones in Bluetooth pairing mode. There’s also a volume and multi-function button that covers playback and track skipping. The buttons have a shallower profile; and while the multi-function button isn’t raised, it has a different texture which I have found makes it easier to locate.

The Quick Action button toggles through the environmental modes (Noise Cancelling, Passthrough and Off), and within the Bowers & Wilkins Music app, it can be configured to bring up your device’s voice assistant. Annoyingly, you have to make a choice between the two – a long hold would have solved that issue.

Like Master & Dynamic’s MW75, the Px7 S2 ship without a 3.5mm port, packaging a USB-C cable for charging and a 3.5mm adapter for plugging the headphones into a wired source.

The Bowers & Wilkins Px7 S2’s battery life matches the PX7, which matches the WH-1000XM5 – a figure B&W feels is more than enough. Improvements have been found in the charging speed: two hours to fill the battery from zero outpaces the PX7’s three, and a 15-minute fast-charge reaps seven hours compared to the older model’s five.

B&W has brought the Px7 S2 under the Music app umbrella, the same app used by the Zeppelin wireless speaker and Panorama 3 soundbar. Functionality for the Px7 S2 is limited as you can’t stream music directly from the app to the headphones; but that’s expected to be added later in 2022.

The app offers the ability to switch noise cancelling modes, and customise treble and bass settings from -6dB/6dB: the Px7 S2 can be paired to, and switch between, two devices simultaneously. Quick Action customises the left earcup’s button, with a choice between “Environmental Control” (noise cancellation) and “Voice Assistant”.

Other features include Auto Standby and Wear Sensor Control. This latter adjusts the sensor’s sensitivity from low, normal and high. Resumption of playback works in practice, whether I was lifting up an earcup or taking the headphones off and resting them on my shoulders.

There have have been moments where the Px7 S2 paused playback when I looked to my left or right, even on low sensitivity – and then it takes a few shakes of the head to get music playing again. It’s an area that could use improvement.

The Bluetooth 5.2 standard is supported with SBC, AAC, aptX, aptX-HD and aptX Adaptive as the codecs for streaming. The wireless stability is very good, almost to the level of Master & Dynamic’s MW75, and better than my experience with the WH-1000XM5. Over several days of use, walking through busy signal areas and crowded places, I only a detected a stutter at a busy Waterloo station, and an even briefer blip at another station.

The Px7 S2 have a six-strong microphone setup – four for ANC and two for voice pick-up. The revised noise cancelling algorithm combined with the tighter seal of the earpads delivers a 30dB cut to environmental sounds, and in my experience the ANC has proved very good in most environments.

It reduces sounds with more efficiency than the MW75, and copes better in busy surroundings such as the Underground. That isn’t to say the Px7 S2 were completely comfortable; when it got loud, the noise on the Tube swamped the can’s adaptive ANC. Whether it was the sound of the wind flying by on the Jubilee line, or another train arriving on the opposite platform, these B&W headphones struggled to keep those noises in check.

But the Px7 S2 take care of ambient noises well, from people talking to traffic from vehicles small and large. This is also a slight improvement on the PX7, suppressing noise with a few degrees more precision.

There is a strange anomaly about the noise cancellation, as turning my head seems to create holes in the headphones’ ANC that allows sounds to poke through. The Transparency mode is solid, piping through enough sound to get a feel of what’s around, and doing so without noticeably affecting the quality of the audio; but the WH-1000XM5 are clearer and expansive.

B&W has repositioned the microphones for added clarity and call quality is very good. The person on the other end could hear my voice fine and clear, although they did comment that my voice sounded a little low. The Px7 S2 pick up more background noise than the WH-1000XM5 and MW75, and this did contribute to ambient sounds mixing with my voice. It’s a satisfactory enough performance nonetheless.

The crux of the Px7 S2’s overall proposition is their sound. Bowers & Wilkins’ marketing and messaging has converged around the promise of accuracy and abiding by artistic intent – the idea being that you’re hearing the music as intended.

Assisting in this process of accuracy is a new Bio Cellulose 40mm driver angled towards the ears to present a wide soundstage and credible stereo image. This new driver setup has a lower THD (Total Harmonic Distortion) of 0.1% for improved clarity, detail and resolution over the outgoing PX7.

And much like the PX7, the Px7 S2 boast a lean sound without much fat at the low-end, coupled with an articulate brightness at the top-end of the frequency range. To get the best from these headphones requires a capable source, and so Tidal and Qobuz are preferred over, say, the Spotify free tier.

While I only have my notes and memory of how the WH-1000XM5 sounded, the Px7 S2 take on a more neutral approach than the richer-sounding Sony. The presentation carries weight, a soundstage painted in wide terms with a smoothly described stereo image. There’s a nice degree of kick and substance to low-end in the percussive elements of Tune-Yards’ Hynoptized, the reproduction of Merrill Garbus’ distinctive vocal stylings seems faithfully preserved.

The soundstage presented is spacious in its parameters, with enough room for instruments and vocals to reside together without stepping on each other’s toes. The headphones do feel placid at their default listening levels, steady rather than energetic in their flow and delivery of Henny from the Familiar Future album. However, a flick up on the volume breathes a sense of vigour and energy into the Px7 S2, as well extending the soundstage’s reach.

The saxophones in Rejuvenation Agenda – Live by Gerald Clayton are expressed with texture and richness. The piano notes strike a bright and twinkly tone through the headphones, with the push and pull of the orchestration rendered with a lively and fluid sense of dynamism and flow. Sons of Kemet and Kojey Radical’s Hustle is given some punchy, weighty bass locked with good tonal balance, while there’s a coursing flow and excellent level of control to Immanuel Wilkins’ Grace and Mercy as it speeds to its final flourish, speaking positively of these headphones’ rhythmic abilities.

Whatever you listen to on the Bowers & Wilkins Px7 S2, their sound is a consistently engaging one, neither overdone nor undercooked. They’re one of the finer listening experiences at their price.

Terrific audio performance There aren’t many headphones that can hold a candle to the sound quality of the Px7 S2 at their price. A frequently expressive, natural and entertaining performer.

The Px7 S2 improve on what came before, although they don’t necessarily put the older PX7 model to shame. The improvements, subtle in some ways and noticeable in others, make them a better overall experience.

Wireless performance is excellent, the noise cancellation very good – but not up to the level of the class leaders – and the sound is terrifically flowing, expressive and versatile. For those who enjoy music, the Px7 S2 are among the best-sounding headphones of their ilk.

There’s no 3.5mm jack on the Px7 S2 but there is a USB-C to 3.5mm that facilitates wired listening.

Does the Px7 S2 have an IP rating?

The Px7 S2 does not feature IP protection.