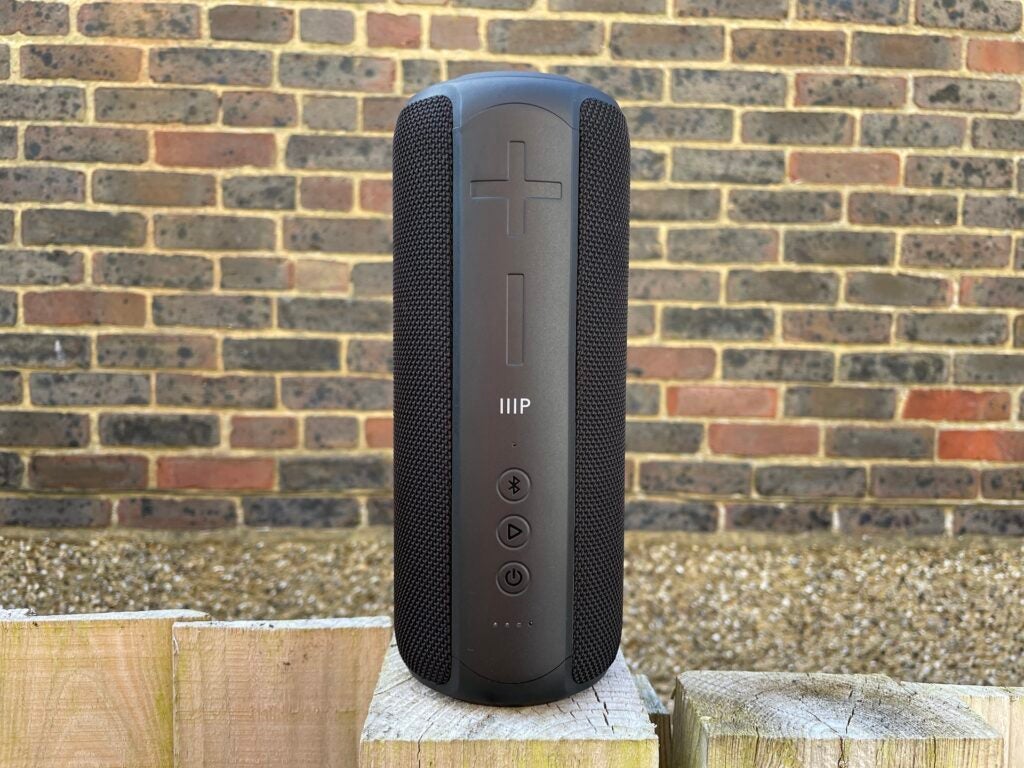 The Monoprice Harmony Capsule 200 feels like the very definition of you get what you pay for. Its audio performance is passable, battery life underwhelming, and the design feels a little plain, but for $70 what else would you expect?


IPx7 waterproofingAble to withstand half an hour being submerged underwater


3.5mm and micro SDA flap on the bottom conceals an auxiliary port and a micro SD card slot. Retro

If you’re from the UK there’s a good chance Monoprice is as familiar to you as Fig Newtons, Cheez Whiz and Little Debbie, but the US-based brand has been selling budget electronics (and more) to our friends across the pond for 20 years now.

As well as monitors, cables, 3D printers and wall mounts for tellies, Monoprice also has its own range of Bluetooth speakers – and the Harmony Capsule 200 looks like one of the most appealing. At $70 it’s the second-priciest available, which shows you just how affordable they are, but with more competition than the shortlist to be crowned Love Island’s biggest moron, is it a false economy?

The Capsule 200 looks like the result of a night of passion between an Ultimate Ears Boom 3 and a JBL Flip 5 – although with black the only colour option it’s not as eye-catching as either. From a distance it looks more expensive than it is, but up close the Capsule 200 is a bit plain. It feels solid and hard-wearing though; you could drop it onto a hard surface and be fairly confident it’d survive largely unscathed.

While your initial reaction might be to stand it upright, the Capsule 200 has passive radiators on each end, so it’s designed to be laid horizontally with the rubberised buttons on top. Controls are pretty comprehensive: there’s a power button (with a row of four LED lights underneath to indicate how much power is left in the 2500mAh battery), play/pause, Bluetooth, and the massive volume buttons can also be used to skip forward and back with a long press. They take a fair amount of force to register, but I don’t mind that with rugged speakers like this.

On the bottom there are two flattened ridges to keep the Capsule 200 upright, although it is still pretty easy to knock off balance and roll onto its side, and on our carpet it refused to stay on its feet at all. The speaker is about the size of a wine bottle and weighs just under a kilogram, so while it certainly qualifies as portable, it’s towards the larger end of the scale. It’d probably take up too much space in a weekend bag, especially if you travel light.

The Capsule 200’s feature list is hardly exhaustive, but it delivers where it matters. It has a toughness rating of IPX7, which means it can spend up to half an hour a metre underwater and emerge unscathed. That’s always handy with a portable speaker, because you never know when the heavens might open, and it means you can use it in the bathroom or by the pool. Do bear in mind, though, that it’s not designed to fend off any dust or other particles, so be careful if you take it to the beach.

This waterproofing means that if you flip the Capsule 200 over you’ll find a flap on the bottom that covers its ports. There’s USB-C for charging, a 3.5mm socket for going wired (if you can find a phone that still has a headphone port, obviously), and, most surprisingly, a micro SD slot. It’s hard to think who might want to listen to music from a micro SD card in 2022, but it doesn’t exactly take up much space.

There’s no app, which is hardly a surprise at this price, so you have to press the power button to switch between sources. That means it’s a long press to turn it off and on, but that just means you don’t accidentally press things you don’t mean to. There’s also a microphone on top for having chats with both humans and AI-based voice assistants.

It’s also possible to pair two Capsule 200s together using Qualcomm’s TrueWireless Stereo tech, but Monoprice only sent us one speaker so I wasn’t able to test this feature.

With a pair of 52mm drivers powered by 6W each, a 66mm driver with 18W of power (that’s 30W in total, maths fans), plus those passive radiators at each end, the Capsule 200 is pretty well-equipped, but it does what a lot of cheaper speakers do: it prioritises the top and bottom end at the expense of pretty much everything in between. Even then, the whole presentation lacks depth and the midrange is too often muddier than a Glastonbury car park on the Monday morning.

The box claims 360º sound, which is technically true in that you can hear the Capsule 200 from all angles, but there are noticeable differences in audio quality depending on where you position yourself in relation to it. When you pump the volume up to take advantage of that power things also start to sound distorted, but it’ll still go pretty loud.

Monoprice reckons you can get up to eight hours out of the Capsule 200’s battery before it needs to be plugged in for a drink, but that seems overly optimistic based on real-world testing. Even at pretty low volumes it waved the white flag after just over seven hours, so it’d have to be inaudible to last much longer. To put that in context, the similarly sized (albeit pricier) JBL Flip 5 lasts nearly twice as long off a charge.

The lights on top indicate how much battery is left, but the first audible warning came just two minutes before it died, which makes said notification close to useless. The Capsule 200 also takes about five hours to fully recharge, which seems awfully long considering you could probably deplete it in less time with the volume pumped up.

The Capsule 500 uses Bluetooth 5.0, and while connecting it to your phone is simple enough (even if the device name is a bit on the cryptic side), range isn’t the best. It’s fine when unobstructed, but put a couple of walls in the way and it’s reduced significantly, with frequent dropouts.

You want a portable speaker you’re not precious about The relatively low price means you can look past the performance if you’re looking for something you don’t have to treat particularly well.

If sound quality and battery life are most important to you The Capsule 200 underperforms in both these areas, which is hardly surprising given its price tag, so steer clear if you want the best.

When considering the capabilities of the Monoprice Harmony Capsule 200 you really need to consider the low price, but being on the affordable side is merely an explanation for underwhelming performance, not an excuse.

For $70, it’s probably competent enough for background listening, or something to chuck in a bag for a festival trip, but the audio performance isn’t good enough for regular use and the battery life leaves a lot to be desired.

If you purchase two Capsule 200 speakers, you can pair them to play in stereo.