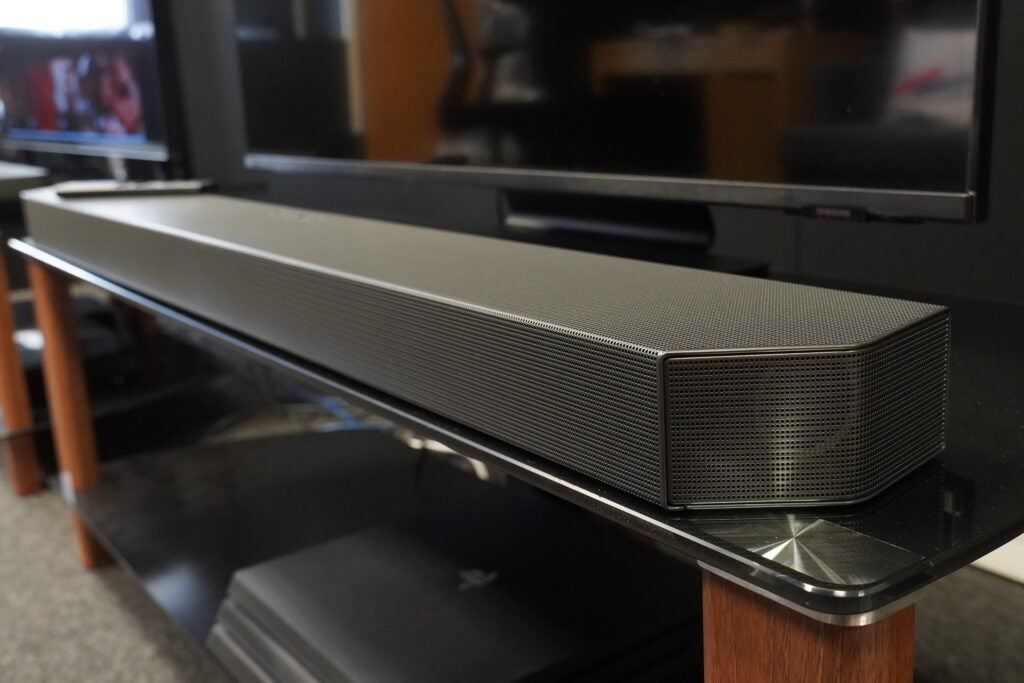 The HW-Q800B delivers yet another impressive immersive performance for a Samsung soundbar, delivering a big, wide and spacious sound and powerful bass performance. With scope to add rear speakers and the Q800B less tied to needing a QLED TV to draw out its best performance, it offers a friendlier path to creating an Atmos home cinema system than Samsung’s previous mid-range effort.

Bass can be overpowering

Samsung is one of the biggest brands in the soundbar market, offering bars at various price points and catering to both home cinema enthusiasts and lifestyle users.

The HW-Q800B falls in the former camp, following the HW-Q800A reviewed earlier in the year, and the Q800B features upgrades both in its appearance and number of speaker drivers, taking a similar approach to the 2021 HW-Q900A in how it fires out sound.

That bar put in a strong immersive performance, so what’s the HW-Q800B got up its sleeve?

The appearance of the HW-Q800B isn’t what you’d call graceful or elegant; more of a functional-looking unit that doesn’t draw much attention to itself.

The grilled finish from the Q800A has been toned down, the black colourway takes on a greyer appearance while the design at the edge of the bar borrows from the Q900A, the angular corners help to spread sound from the new side-firing drivers.

On the top surface and visible through the grille are upfiring drivers for delivery of Atmos and DTS:X audio, while in the centre are the multi-function, volume and microphone buttons, the latter disables the built-in microphones Alexa uses.

The display placement issue that affected the Q900A soundbar is not apparent on this 800 series model, with the LED sensibly placed on the front (right from centre as you’re facing the bar), which makes it easier to read, make set-up changes and know what mode the soundbar is in. Here’s hoping the Q930B and above models follow the same path.

The remote has changed from the ergonomically shaped model of 2021 to an effort that more closely resembles the zapper that comes with Samsung’s TVs. Its functionality seems to have grown too (or perhaps I simply wasn’t paying attention) with the christened Smart One Remote Control able to control TVs (compatible Samsung models I should add) and connected devices.

There’s a bit more to control with the inclusion of Tone Control (adjusting bass and treble by -6/+6) and CH Level (changing the volume of each speaker). CH Level actually pilfers a few audio modes from the Sound Control button, which now governs other modes such as Active Voice Amplifier, Night Mode, Voice enhance among others.

With the main bar measuring 1110.7 x 60.4 x 120mm, this is still a fairly meaty piece of home cinema kit to find space for, though the step-up HW-Q930B has the same dimensions if that’s of any value. At 5.1kg it’s not too heavy, though the active wireless subwoofer is a similar looking heavy beast to the 2021 range.

The feature set carries plenty over from last year with a few tweaks and changes. The driver configuration has been pushed from 3.1.2 to 5.1.2 thanks to the new side-firing speaker units. There’s an upgrade path possible by adding rear channels in the SWA-9000S wireless surround package to create a 7.1.2 channel system.

The HW-Q800B no longer needs a Samsung TV to assist in calibrating its sound, with built-in microphones in both the subwoofer and soundbar meaning the SpaceFit Sound Gen II feature can equalise the soundbar’s performance to your room’s acoustics on its own. That’s helpful, and sidesteps an annoying quirk of last year’s models where this tuning was exclusive to some Samsung QLED TVs.

There’s a variety of smart features in Active Voice Amplifier and Adaptive Sound. The former raises the volume of dialogue above any external sounds the bar senses in the room to ensure dialogue from the centre channel remains audible. Adaptive Sound uses artificial intelligence to automatically optimise the performance for dialogue heavy content, sports and movies. For example, watching sports might make the soundbar emphasise the crowd noise to give the impression of a bigger, room-filling sound.

Other modes include Game Mode Pro which achieves a similar effect as Adaptive but with gaming, along with Standard and Surround options. Q-Symphony is only compatible with Samsung TVs, synchronising the bar’s sound with the TV to place effects and dialogue around the soundstage for a bigger, expansive performance.

Physical connections are hidden in the recessed area with an HDMI eARC output, HDMI input, and Optical port – the input can pass through 4K HDR (HDR10+) content. Wireless offers AirPlay 2, Spotify Connect and Chromecast (which is a new addition), as well as Bluetooth (SBC codec). Worth a mention is that the soundbar’s performance could be a bit finickity, as it disconnected from the Wi-Fi a few times and wouldn’t connect to the TV, needing a few soft reboots to return to normal.

The SmartThings app is a part of the experience that you could skip altogether, but if you have other Samsung devices and smart IoT products then it’s certainly worth perusing as the app has the means to kickstart Spotify Connect and Alexa integration. Elsewhere are options to alter the equaliser settings, audio synchronisation, volume/woofer settings, sound modes, voice/bass enhancement and to put the bar into Night mode.

The Tap Sound feature is still around, but only has relevance to Galaxy smartphone owners, allowing music to be transferred to the bar via a single tap on the top panel.

While I did not test the HW-Q800A, judging by the spec it feels fairly obvious to discern where the HW-Q800B has uncorked improvements with its new side-firing speakers. Our review of the Q800A said it did a solid job of casting sound from its bodywork and the Q800B follows through in a similar vein.

Watching The Batman in Atmos and the rainy environs of Gotham City make for an impressively wide soundstage. The presence of rainy showers can be felt both in the height channels and out wide to both the left and right of the bar, so even for a front-heavy Atmos presentation, it’s a big and spacious performance to delve into.

There’s a great sense of width and height evident in The Force Awakens in the scene where Rey and Finn try to escape the attention of stormtroopers on Jakku. The explosions from the subwoofer are big and impactful, Tie Fighters fly above the TV, while there’s a lovely sense of fine detail and spaciousness as the dust and debris of explosions linger in the air and fall to the ground.

The HW-Q800B is also a very weighty-sounding bar. There’s heft to the Millennium Falcon as it speeds through the ruins of downed Star Destroyers; the power behind the bar’s performance creates a visceral and exciting scene – there’s nothing lightweight about this Samsung bar.

Compared to Bowers & Wilkins Panorama 3 and the Samsung is the smoother and more bass-inflected performer of the two, which has benefits and drawbacks. It doesn’t fire sound into the room as well as the Panorama 3, its sense of definition is less crisp and attacking – the scene when Maz Kanata’s Cantina is attacked and the soundbar doesn’t push effects into the room with as much force as the Bowers does.

But it treats dialogue with more smoothness and naturalism than the Panorama 3 in both Tenet and Dune. There are still a few words in Lady Jessica’s recitation of the Litany Against Fear in Dune that get lost in the mix, but flipping on the Voice Enhancement adds a smidge more clarity, bigger presence and crisper tone to dialogue, which is more accommodating than the options presented by the Bowers where dialogue is concerned.

Bass is mighty from the wireless subwoofer with Blade Runner 2049, showing no problems handling the dynamic range of that soundtrack with a deep, powerful and room shaking performance. It’s an intensely cinematic and will absolutely annoy the neighbours.

It can be a tad overpowering in Last Night in Soho during the dance scene in Café du Paris, and I sense with other films the bass arguably takes on a more active role in proceedings than is ideal. Using the SpaceFit equaliser added clarity and definition to the low-end performance in that film, while in The Batman it added even more intensity to the Iceberg Club fight scene. I preferred having it on rather than off, but your taste may vary.

It’s capably dynamic too, as confident in capturing the nuance of quieter scenes as it is with the bigger action sequences, the shifts between loud and quiet are conveyed naturally, avoiding the flatness the Devialet Dione brought to proceedings.

With music, the HW-Q800B continues Samsung’s recent (at least in my opinion) form of bars that are good with movies and music, although I found bass needed to be dialled down as listening to Beyonce’s Déjà vu was overpowering at first. Listening to tracks over Spotify Connect and the bar is clear, sharp and detailed, but energetic too. Vocals are crisply delivered and even with bass dialled down there’s still plenty of weight provided to King of Leon’s Sex on Fire.

Over Bluetooth, the Q800B’s performance is not too bad. It lacks the sharpness and crispness of Spotify Connect, with not the same attack and energy but vocals were clear and defined in Sam Sparro’s Black and Gold, while Bluetooth’s slightly enfeebled bass performance actually brought more balance. Regardless of whether it was over Wi-Fi or Bluetooth, the Samsung was versatile in playing musical genres such as pop, R&B, rock and Dance. It’s another strong effort on the music front.

If you enjoy powerful, immersive sonics The HW-Q800B is a front-heavy performer without any rear speakers, but it supplies plenty of entertainment for movies and music with its wide and spacious sound.

You’re sensitive to bass The subwoofer supplies lots of power, energy and weight to the Q800B’s performance, but it can result in an overpowering sound

Samsung’s rejigged 2022 soundbar line-up has produced a satisfyingly cinematic effort in the HW-Q800B. It’s a big and spacious immersive performer, with the new side-firing speakers working to good effect to widen its soundstage.

There’s the opportunity to add rear speakers as an upgrade path later down the line, and by extricating the room calibration features from Samsung’s own brand TVs, the bar should offer a more consistent performance regardless of what TV you have.

It launches at a cheaper price than the 2021 HW-Q900A and while there are less speakers than that model, I wouldn’t say there’s any less entertainment derived from this bar.

Can I add additional speakers to the HW-Q800B?

The HW-Q800B supports the SWA-9000S wireless rear speaker package that takes the soundbar from a 5.1.2 system to a 7.1.2 configuration.

The HW-Q800B doesn’t have an HDMI input that supports 4K/120Hz high frame rates.

Can I connect Alexa to the Samsung HW-Q800B soundbar?

Alexa is built-in to the HW-Q800B, and can be set-up via Smart Things on a smartphone by using the app to link the soundbar and your Amazon credentials together.