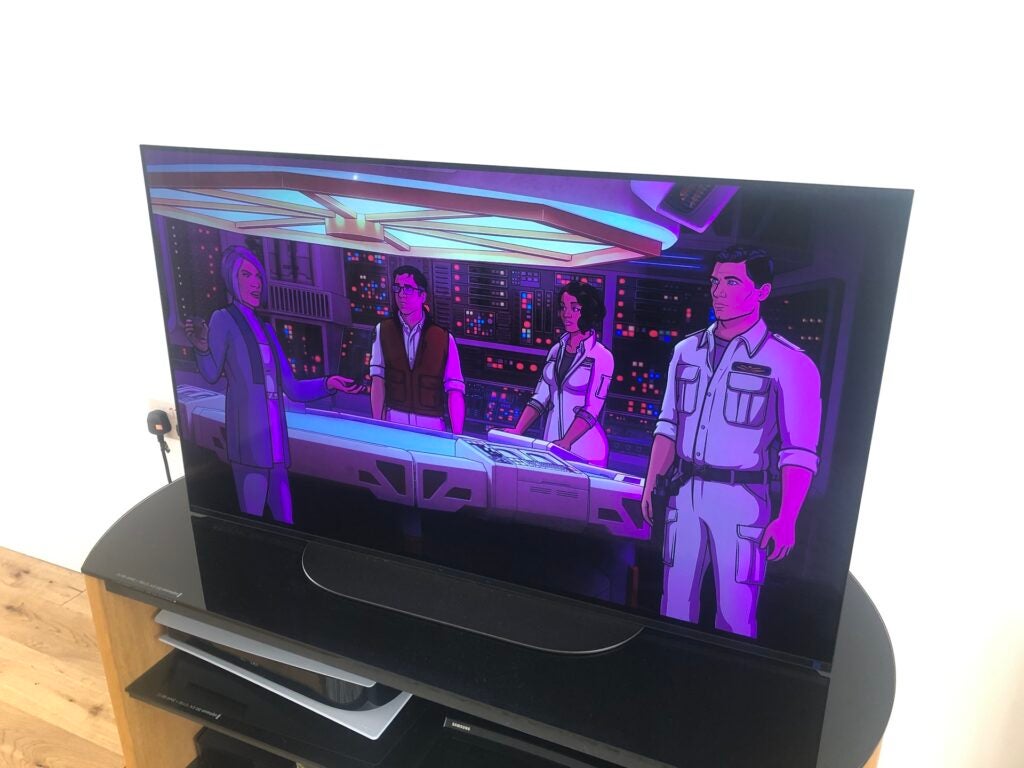 They said it couldn’t be done. Well, more accurately they said there was no profit to be made by doing it.

But finally, here’s an OLED TV that’s small enough to count as realistic for any number of customers who a) don’t have a big room to watch TV in or b) simply don’t want an especially big TV. Sony’s A90K range of OLED TVs starts here, with this 42-inch model.

Mind you, if there’s no profit to be made at this asking price then Sony really needs to have a look at itself. This may be a relatively titchy screen but there’s nothing titchy about the price-tag. So can the XR-42A90K justify costing twice as much as some of the best small TVs we’ve tested recently?

If you’re hoping for a bit of that legendary OLED slimness from the Sony, you’ll need to recalibrate your expectations. There’s a hint of the spooky OLED skinniness at the top of the XR-42A90K, but when seen in the profile the majority of it measures 57mm deep. Which means by any realistic measure this is not a slim TV, and consequently not that enticing a prospect for wall-hanging.

It’s a much better proposition for putting on a surface. First of all, the sturdy pedestal foot is quite compact, which means the surface needn’t be all that big. Secondly, the screen sits gratifyingly low on the stand, which makes for quite a nice visual statement. And thirdly, Sony supplies a couple of extenders in case you want to raise the bottom of the screen above the stand sufficiently to position a soundbar in between.

Aside from its unglamorous depth, this is quite a good-looking device inasmuch as its bezels are minimal and its build quality is unarguable. There’s a degree of cable-management on the rear of the panel, in the form of clip on/clip off panels that hide the majority of the physical connections.

The A90K uses the same Cognitive Processor XR that’s fitted to the XR-A95K QD-OLED I reviewed recently – and here, as there, its job is to make sure native 4K content looks its best (compatibility with HLG, HDR10 and Dolby Vision HDR standards helps here) and upscaled 1080p content gets the benefit of its AI smarts. It’s intended to ensure your gaming experience is as natural, smooth and convincing as your movie experience is. And if it can perform as well here as it does in the A95K, we should be in for a visual treat.

There are plenty of options for getting content on board for the processor to work its magic on. Physical inputs run to four HDMI sockets, a couple of USBs, an Ethernet input, a pair of aerial posts to hook up the integrated TV tuners and a digital optical output. Wireless alternatives consist of Bluetooth 4.2, Wi-Fi, Chromecast Built-In, and Apple’s AirPlay and HomeKit.

Half of those HDMI ports are 2.0, the other two are 2.1, which means they’re 48Gbps, 4K/120Hz, VRR and ALLM. Good news for current-gen gamers, even if price-comparable LGs and Samsung tend to have 2.1 compatibility across the board. PS5 owners can ignore the lack of HGiG support thanks to their Auto HDR Tone Mapping feature, but the omission of Dolby Vision game mode will irk Xbox Series X users.

One of the Sony’s HDMI 2.1 inputs is also eARC enabled, which might concern households with both consoles in addition to a soundbar that operates via eARC.

Sony uses Google TV as a smart interface these days, and while it’s a shameless screen-hogger it does at least make navigational sense. App support is wide-ranging, recommendations aren’t outlandish, and it doesn’t waste too much of its time trying to sell you content. Disney+ is the only major app that isn’t the best version of itself here – it goes without Dolby Atmos support.

Using the interface or trawling through the set-up menus can be done using either of the supplied remote control handsets. As is usual these days, one is nice to hold, positive in action and has just the headline controls, while the other is nasty to hold, vague in action and has too many buttons (most of which are too small) to cover every eventuality.

Voice control is available, via Google Assistant – there’s a little switch on one of the screen’s side-panels to turn the integrated mic on or off. It works well, and integrating the A90K into your wider Google Home system is easy.

To have any chance of showing what it can do, the XR-42A90K ideally needs some native 4K content with an HDR element to it. And with a Dolby Vision-assisted Netflix stream of Metal Lordsincoming via Ethernet, what it can do turns out to be quite a lot. The overall impression is of utterly naturalistic, convincing and life-like images.

A lot of this is thanks to the Sony’s extraordinarily wide-ranging, nuanced and persuasive colour palette. As far as judging colour volume and saturation goes, the XR processor is a star – colours here are varied, nuanced, and vibrant without getting anywhere near overblown or aggressive. And it helps no end that the Sony is able to invest images with a lot of detail, both broad and fine – so shading, texture and pattern are also given complete expression.

As everyone expects from a decent OLED TV, black tones are equally accomplished. There’s real depth when there needs to be, detail in every circumstance, and great shade variation – so the none more black clothing that features a lot in Metal Lordslooks entirely life-like.

Elsewhere the A90K does mostly admirable work, too. Picture noise is basically absent, edge-definition is smoothly convincing, and there’s great depth of field too. Motion is controlled with proper authority, no matter if it’s the made random movement-in-all-directions of a sports broadcast or the leisurely slow pans of a Coen Brothers feature.

And with a few mild (and predictable) caveats, this talented presentation carries over to upscaled 1080p content. The brilliantly balanced colour palette is in evidence, on-screen movement is stable, edges are crisp, and until it encounters wide-open shots of uniform sky or something like that, the Sony controls picture noise well too.

The gaming experience via a PS5 is similarly impressive. All the vibrancy, all the insight, all the authority of the movie presentation is present and correct, response times (while not class-leading) are very respectable, and at no point do the on-screen action reflect how hard both the console and the TV are working.

There’s really only one area where the A90K is anything less than excellent – but it’s significant. OLED TVs have always suffered (relatively speaking) from a lack of outright brightness, and when a screen is as compact as this one the pixel density makes achieving real brightness even more difficult.

And sure enough, the Sony just isn’t that bright a watch. Even with Dolby Vision Bright selected when watching Metal Lords, the lighting looks subdued and there’s a distinct lack of ‘pop’ from bright white areas. The white tones the A90K can generate are just as subtle and varied as the rest of its colours, but they’re short of power. And there’s a knock-on effect: the Sony’s contrasts are convincing as far as they go, but they don’t go as far as they might.

Sound is taken care of using the audio system Sony’s been perfecting on its OLED TVs for a while now. Here, an actuator excites the screen to the point it acts as a speaker, and there’s a small woofer peeping out from the rear panel to give some low-frequency body. It’s been pretty effective for Sony in the past, and it helps the A90K look clean and minimal too.

The individual nature of the Sony’s audio system means it projects well through the midrange, making dialogue distinct and coherent. Because the screen is delivering sound, there’s real unity of presentation, and even a little hint of sound emerging from specific areas of the screen.

But despite the support of the little woofer, the A90K lacks low-end presence and is distinctly short of punch. There’s a hint of edginess at the top end, too – and the more you increase volume, the less of a hint and the more of a trait it becomes.

You want big OLED performance from a little OLED TV. Finally, the benefits of OLED can be yours no matter the size of your viewing space.

You enjoy a brightly lit room. The lack of outright brightness here means a dim viewing room is pretty much essential.

The merits of the XR-42A90K are obvious, and they’re all about bringing OLED screen technology to a panel size that has previously been considered unworkable. Certainly it has the sort of overall picture fidelity that makes every watch a treat. But watching has to take place with the curtains drawn, because of the screen’s lack of brightness – and it will only happen at all if you’re prepared to spend what is an undeniable premium.