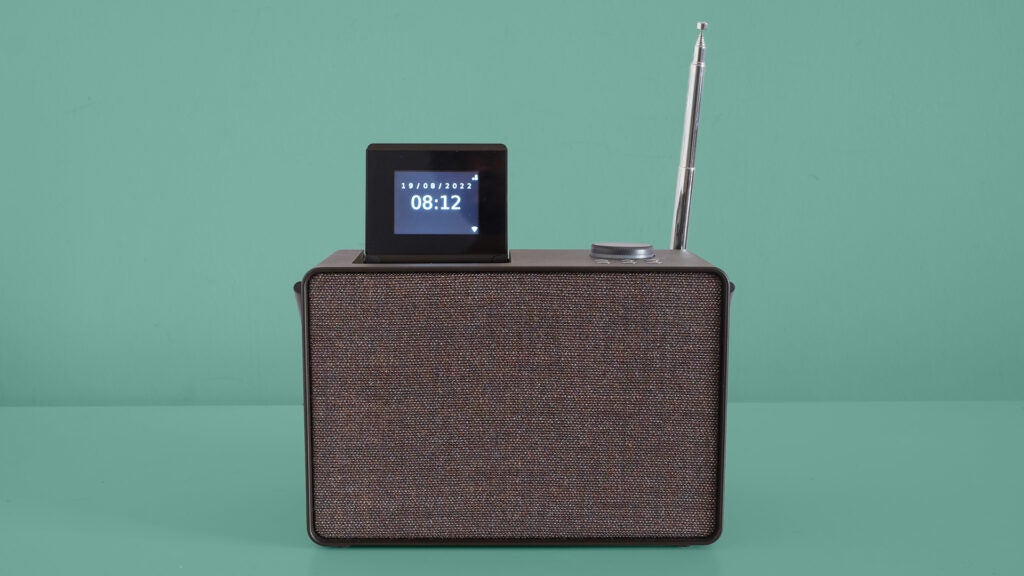 The Pure Evoke Play is a classic DAB and internet radio, with Bluetooth. While it goes easy in terms of putting “tech” front and centre, its overly bassy, boomy sound does music few favours.


Flip-up screenThis radio has a neat-flip-up display, letting you keep it out of sight during day-to- day use.

The Pure Evoke Play is a DAB and internet radio that also supports Bluetooth and Spotify Connect. And it’s first in a brand new series of products since this iconic British company was sold to the Austrian investment company AVenture AT.

Under new management, it’s no surprise that the Pure Evoke Play represents quite a shift from the classic Evoke DAB radio designs of the past.

Pure hasn’t let standards drop far on the design front, however. This is a well-made, smart-looking radio with a sufficient number of features to satisfy the kind of buyer who would still want a dedicated radio, rather than simply streaming internet radio from their phone to a Bluetooth speaker or smart speaker.

But there is an issue on the audio front. While the Pure Evoke Play appears to use quality speaker drivers, its bass management is all over the place. Its too bassy at low volumes, boomy at high volumes, leaving too-narrow a sweet spot in which it sounds its best. And even then it’s a bit too bassy for my taste. You can alter its signature with EQ, but the defaults should be better in a £249 radio.

Wool speaker grille coverPlastic but solid casingLooks good with the screen stowed; not so great with it out

The Pure Evoke Play looks quite unlike the classic Pure Evoke radios, which used wood and wood laminate casings to invoke a sort of retro charm. This radio looks more modern, but will continue to appear like an old-school piece of tech next to your average smart speaker.

Its casing is dark brown plastic. However, the Pure Evoke Play doesn’t seem cheap in person. Its 2.1kg weight lends it a sense of solidity, and the roughened texture of the shell avoids the tacky feel of plastic.

The speaker grille is recycled wool. It looks attractive, mounted on a plastic sub-layer so kiddie fingers can’t damage it – or the drivers beneath – with a prod. Its handle is metal, painted in gloss brown to match the casing.

Other parts of the Pure Evoke Play design are a little odd. It has a flip-up screen, and its flap hides the main interface controls and button that lets you switch between sources. On day one this may not make much sense; you can’t lift the handle with the screen up.

However, a few days in matters will clear. Pure wants you to setup the “favourites” you’ll use day-to-day via the four preset buttons that sit on the top panel (these aren’t obscured by the screen), only bringing up the screen when you want to change the source. That’s Bluetooth, DAB, Internet radio and so on.

The Pure Evoke Play looks a lot prettier with the screen stowed away; the pretty naff-looking low-res LCD turns almost monochrome at an extreme angle.  And, as many years of Pure radios have taught us, less techy-looking products tend to age better. The original Pure Evoke looks better than the Pure Sense in 2022, for example.

Screen hidden, the Pure Evoke Play is plain, tasteful and not too techy, with only the light ring around the chunky volume knob to draw attention. And yes, this light can be dimmed or switched off – useful if the radio will live in a room in which you also watch late-night movies.

The Pure Evoke Play has a set of features similar to the roster found in older smart Pure radios, and the interface is largely the same too. Here’s the full list, which you’ll see when you hit the Source button:

In addition, you can setup two alarms if you dig into the settings menu properly. When one fires off, the volume gradually ramps up; but there’s no snoozing here. The main display also lacks auto brightness, which is highly desirable in a bedside unit.

There’s no aux input, which might be an issue if you were planning to plug a record player with a pre-amp into the Pure Evoke Play, for example. It seems less of an issue in 2022 than it did when I was reviewing Pure DAB radios back in 2012, though.

You can control the radio using the Undok app on your phone.  It’s a good way to sift through Internet radio stations, which can feel a little fiddly through the radio’s own controls. But surely part of the point of a device such as the Pure Evoke Play is to get away from controlling and receiving all music from your phone.

There’s no support for direct streaming standards such as AirPlay or Chromecast, and no smart assistant features either. The first two would be nice, but given how many audio devices are arriving with Siri, Alexa and Google Assistant, it’s refreshing to see them left out here.

The Pure Evoke Play supports battery power, and Pure sent me a radio with one of these batteries already connected. However, it isn’t included as standard; it costs a substantial £59 on its own, which takes the cost of the radio up to £308. However, the costs here are very similar to those of one of the Ruark R1 MK4.

The Pure Evoke Play has a very solid driver array for a DAB radio of a fairly standard size. There’s a 3-inch mid/bass driver and two 0.8-inch tweeters. It’s quite the upgrade over classic Evoke designs such as the Pure Evoke H4, most of which used a single 3-inch driver.

Those tweeters lead to greater treble clarity than you’d typically hear from a radio with a single driver, and since they’re arranged to each side of the 3-inch drive, they’re used as a stereo pair. Not that you’ll get much of a stereo effect from a box this small. Higher clarity also means the Pure Evoke Play is far less forgiving of the often dreadful bit-rates used in DAB stations. I’d recommend switching to the Internet radio mode wherever possible here.

Note that the Pure Evoke Play is much more of a party speaker than most classic DAB radios. Bass depth is deeper, and the maximum volume is less conservative than the smaller Pure Evoke radios of old. It’s able to fill larger spaces than those older sets, and has a more dynamic sound.

It represents something Pure has experimented with a lot over the years, a merging of the roles of a DAB radio and a wireless speaker, which typically offer much more lively and loud audio for your cash.

Bass is the big problem here; it’s hugely over-emphasised. At low volumes it can sound as though the low frequencies are all you’ll really get, and at high volumes bass boominess takes over the audio frequently. A bottom-loaded bass port probably doesn’t help.

Thankfully, the volume sweet spot is around the volume you’d use for day-to-day listening. At 10-12 out of 30 on the scale, the Evoke Play delivers the best tonal balance; but it still isn’t great. Kick drums and bass guitar lines trudge over everything else. Songs you know just won’t sound as they should, as if the producer pushed up the faders on certain instruments, and the vocals get lost.

Spoken word stations are affected, too, in part as a result of the bass-heavy “radio tone” typically used in such productions.

While I like parts of the Pure Evoke Play quite a bit, particularly among DAB radios, it often sounds distractingly off. But I do believe you can fix it.

The Pure Evoke Play offers pretty poor EQ customisation: you get basic bass and treble sliders, just like previous Pure Evoke models. However, set the bass to its minimum setting of “-7” and the treble to “-3”, to avoid a too-bright tone, and everything starts to sound a lot more even and balanced. The tools work, basic as they are.

This setting also reduces some of the bombastic power that Pure appears to want to generate here – but I think it was an over-reach in the first place. Given the Pure Evoke Play’s small cabinet size, it probably would have needed a passive radiator to achieve a great deep-bass sound – or a high-excursion woofer of the type that features in the Sonos Play:1.

Still, if the Pure Evoke Play had sound closer to what I’ve teased out of it with the tweaks, I’d have been happy to give it another star and a general thumbs-up.

The Pure Evoke Play is a relatively simple and – with the display stowed – stylish radio with a multi-speaker array inside that sounds clearer and more dynamic than older DAB sets.

Bass is poorly managed here; it sounds overinflated at all volumes, and becomes boomy when you raise the volume higher. You can improve it with tweaks, but you shouldn’t have to.

The Pure Evoke Play is a reworking of one of the greatest ever ranges of DAB radios. We get a new look, familiar features and more speaker drivers than previous Pure radios of this style – but it costs more than those golden oldies, too.

It’s fairly loud and powerful, with a more dynamic and larger-scale sound than a standard single-driver DAB radio. However, the bass is distractingly domineering and becomes very boomy at higher volumes.  The Pure Evoke Play’s very basic EQ controls do let you tame the sound if you’re willing to put in the work, but you shouldn’t have to do this in what is a fairly pricey radio.

We test every radio we review thoroughly over an extended period of time. We use industry standard tests to compare features properly. We’ll always tell you what we find. We never, ever, accept money to review a product.

Does the Pure Evoke Play include a battery?

The Pure Evoke Play battery pack is an add-on accessory that costs £59.

How many presets does the Pure Evoke have?

There are 40 preset slots in Internet radio, 10 each for DAB and FM. However, there are only four preset buttons on the radio itself.

Does the Pure Evoke Play have an alarm clock?

There are two programmable alarms, but no snooze mode.