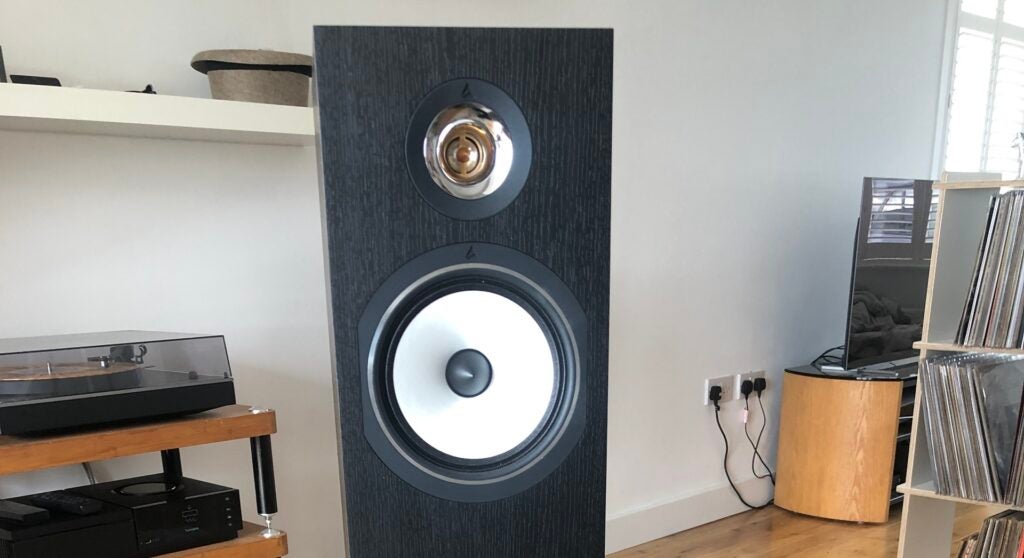 In certain circumstances, the Triangle Esprit Antal EZ are among the most engaging floorstanders such money can buy. But they don’t have the sort of all-round ability that can turn “certain” into “all”.

Can sound rather relentlessNo fans of small-scale, down-tempo contentDemand plenty of breathing space

Since 1980, French brand Triangle has been putting its own very specific spin on the notion of what constitutes a good loudspeaker.

The company’s website is unequivocal in its insistence of the importance of emotional response versus the rather more trite considerations of reason and rationalism.

So it seems reasonable to expect the sound of these Esprit Antal EZ floorstanders to rouse the listener’s passions one way or another. But which way, exactly? That’s the real question.

The Triangle Esprit Antal EZ (which, for the sake of brevity, I’ll be referring to as the Antal EZ from here on out) are on sale now, and in the UK will set you back £1799 per pair.

Or, at least, they will if you choose the chestnut finish or the black finish of the pair being reviewed here. If you fancy gloss black or gloss white instead, you’re looking at £2399. That translates to $2699/$3199 in the United States, and AU$4199/AU$4999 in Australia.

It doesn’t take much time in front of your favourite search engine to realise these prices can easily be described as “fluid”. In any event, there’s a lot of cabinet and a great many drivers here for your money – certainly more of each than similar money spent on any number of nominal rivals might buy you.

Wanton design flourishes aren’t for Triangle. The Antal EZ are available in four finishes (the black ash here and the chestnut versions are more affordable than the gloss black and gloss white alternatives), but no matter the finish you choose, the speakers are far easier to describe as imposing than they are in any way interesting as far their design is concerned.

The cabinets themselves are a considerable H1090 x W200 x D345mm. Edges are square, sides are parallel and corners are pointy. There’s absolutely nothing wrong with the way the Antal EZ are built or finished; but they appear to have been constructed much more than they have been designed.

And that impression only becomes more evident on attaching the magnetic grilles – they cover the entirety of the front plane of the speakers, raising the anonymity quotient another notch. If you choose not to cover them, then you leave the big shiny badge just above the gaping bass reflex port exposed, and it doesn’t do much to elevate the look of the speakers.

There’s a glass plinth onto which the speakers can be bolted. It raises the overall height to 1115mm, the width to 300mm and the depth to 400mm – and if you attach the four sturdy aluminium spikes (or the softer rubber alternatives), the units get taller still. The plinths look good, though, adding a little visual relief – and isolating your speakers from the floor as much as possible is always a good idea.

The Antal EZ are three-way, four-driver loudspeakers, with a few technical highlights where their driver array is concerned.

The tweeter, for instance, is a variation on the horn-loaded design originally developed for the – considerably more expensive – Magellan series. It’s called TZ2550, and it comprises a titanium dome inside a compression chamber. Triangle has carefully profiled the extremely shiny horn and phase plug in an effort to deliver low distortion and wide dispersal. The fact that it looks quite dramatic doesn’t do any harm, either.

Below the tweeter there’s a 165mm mid-range driver made of untreated cellulose paper. Again, taking inspiration from its own Magellan loudspeakers, Triangle has paid close attention to the shape of the dust cap and the profile of the cone itself in an effort to extract an open, uncoloured sound.

Beneath this are a pair of identically sized fibre-glass woofers, for which the word purposeful might have been invented. And then, to up the purposeful quotient even further, the bottom of the cabinet features a sizable forward-facing bass-reflex port.

The rear of the cabinet is, naturally enough, a fair bit less dramatic. There’s a big brushed aluminium plate towards the bottom, which is home to four big speaker-binding plugs that can accept 4mm banana plugs. Triangle obviously thinks bi-wiring is the way to go here, but the Antal EZ are supplied with a pair of sturdy jumper cables in case you don’t agree.

Despite the helpful orientation of the bass-reflex port, these big speakers still demand you take a little care when positioning them. Obviously, a small room is out of the question – and even in medium-sized or larger rooms, take care to place them a reasonable distance from a rear wall and out of corners.

As long as you’ve managed all that, the Antal EZ undeniably have some areas of talent. If you enjoy outright scale of sound, and if you consider lively and confident to be positive traits in every scenario, you’ll find the Triangle enthusiastic companions.

During the course of the test, the Triangle played music ranging from a vinyl pressing of Arvo Pärt compositions and 24bit/96kHz FLAC files of Nick Drake’s Pink Moon (which they don’t especially appreciate), to a Tidal Masters stream of Pantha Du Prince’s Start a New Life and a CD of PJ Harvey’s To Bring You My Love (which they most certainly do) – and they didn’t alter their fundamental attitude in the slightest. They’re a rollicking, upfront listen; forward to an almost laughable degree, and overtly intolerant of recordings that don’t suit their gregarious nature.

Low frequencies – you won’t be staggered to learn – are full-figured and substantial. Their sheer presence is most immediately notable, but they’re not an entirely blunt instrument. There’s detail regarding tone and texture in there, but it’s just a little cowed by the gusto with which the Antal EZ serve up the bass stuff. At the top-end, that complex tweeter arrangement results in an equally assertive presentation, but the light and shade of treble information is given a little more room in which to express itself.

In between, the Triangle do good work in allowing singers as idiosyncratic as Drake and Harvey to reveal all their character. Details levels are high, and voices project well towards the front of the large, reasonably well-defined soundstage that the Antal EZ create. The more communicative a vocalist, the more expression these speakers grant them.

Broad dynamic shifts are handled reasonably well, although unlike most speakers – which tend to go from quiet to loud – the Triangle seemingly start at loud and just get louder. The more subtle harmonic variations apparent in, say, the Arvo Pärt pieces are alluded to rather than highlighted. And where rhythmic expression is concerned, it seems to depend entirely on the sort of music you’re listening to at any given time – the Antal EZ want for nothing where bass presence is concerned, but they can sound slightly musclebound.

Their forward and convivial nature is never in doubt, but it can result in the Triangle tripping over their own feet just slightly. Attack and decay, especially of the lowest frequencies, could be a touch more rigorous in its control.

Quieter, more contemplative content gets pretty short shrift from the Antal EZ. They still put in the hard yards where soundstaging is concerned, still freight the mid-range with plenty of detail, and still paint a winningly full picture at the top of the frequency range. However, their persistently forward nature can make such content sound rather forced. One can almost hear the Triangle drumming their fingers, just waiting for the next opportunity to kick right off. It isn’t the most conducive attitude if you enjoy sparer, lower-key recordings.

You’re certain bigger is better There’s an awful lot of loudspeaker here for the money, and its sound is big too.

Ultimately, where the Triangle Esprit Antal EZ are concerned, it’s all about the “ifs”. If you want a big loudspeaker, if you have a big space to fill with sound, if you like an upfront, almost in-your-face sort of presentation, if you want to see – as well as hear – where your money has gone, well, dive right in. But if you need an all-rounder, or if you like a bit of light and shade to your listening, you’ll probably need to look (and listen) elsewhere.

We test every hi-fi speaker we review thoroughly over an extended period of time. We use industry-standard tests to compare features properly. We’ll always tell you what we find. We never, ever, accept money to review a product.

The Antal Ez features bindings for bi-wiring to connect to an amplifier.