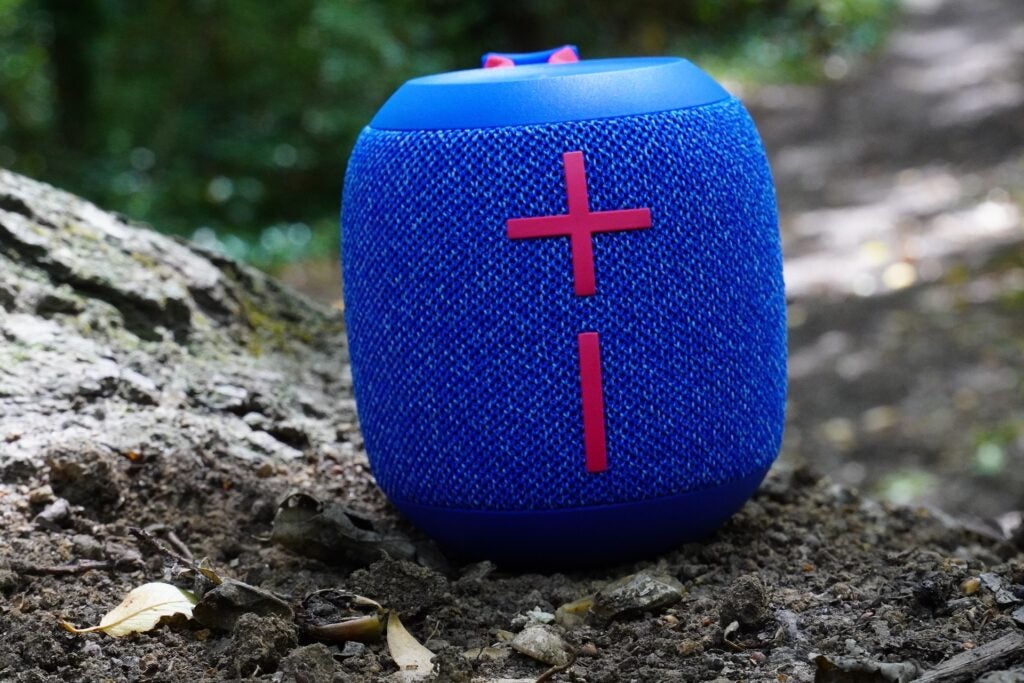 A few tweaks rather than massive changes would appear to make the Wonderboom 3 a safe update, but the audio is the best it’s been, enough to cement its position as one of the smarter budget portable speaker buys.

With the Wonderboom series reaching trilogy status, there’s a sense with the third go-around of being confronted with the notion of sticking or twisting.

After hitting the bullseye with the Wonderboom 2, where can Ultimate Ears go with the third iteration? You only have to think of Hollywood series that arguably hit the apex with their third effort (The Bourne series) or were something of a letdown (The Rise of Skywalker).

Getting it right is never easy but releasing a new product means enticing customers to come back to the well again. What does the Ultimate Ears Wonderboom 3 have to get us excited all over again?

Not unlike the Marshall Emberton II, very little has changed with the appearance of the Wonderboom 3. The entire Wonderboom series has more or less kept the same size and appearance. The changes to Wonderboom 3, on the outside at least, are small.

Those changes amount to the two-tone colour scheme being more contrasting, and the choice of finishes numbers at four: black, blue, pink and a sort of greyish white, all with their own names you’d probably forget in an instant.

On its front are the extremely hard-to-miss volume buttons, with power, playback and Bluetooth buttons on the top surface. Operation is fine, and feedback is solid when pressing the buttons. It’s the type of speaker where a nudge is all that’s required.

The design is as resilient and tough as previous generations, built to survive 5ft drops and carrying an IP67 rating that makes it both water- and dust-proof. The fabric that surrounds the Wonderboom 3’s midriff remains scratch-proof just in case a family pet decides to use it as a toy (I can’t vouch for what would happen if it were bitten).

There’s a hang loop for placing the speaker on a hook, an Outdoor Boost button on the underside, and a soft rubber finish on the bottom and top surface that ensures a grippy hold. On its rear side is a flap that conceals the micro-USB charging port.

The big change is what’s going on beneath the surface. Like the Emberton II, Ultimate Ears has shifted to a more sustainable design, the Wonderboom 3 is made from 31% post-consumer recycled plastic.

Not much has changed on the feature front with slight enhancements and tweaks, though the most controversial (if you can call it a controversy) is what’s stayed the same.

And what’s the same is the Wonderboom 3’s refusal to engage with USB-C charging. It is odd not to include USB-C when others are, but it’s not something I’m overly bothered with, however I can see why others may feel different.

Part of my lack of consternation about battery life is that it’s been boosted by an extra hour to 14, which for a portable speaker of this size is plenty. That’s more than the Sonos Roam (11 hours) and Tribit StormBox Micro 2 (12 hours), so unless it’s being used for 14 hours straight, that’s around a few days use.

The Outdoor Boost and Double Up modes work exactly as before, the former reduces the impact of bass and puts the emphasis on the mid-range clarity and high frequencies, while Double Up engages stereo pairing with another Wonderboom 3. There’s no stereo pairing with other Wonderboom generations, and it would not surprise me if some were disappointed about that decision.

Google Fast Pair is a new addition, but only has appeal to Android users as the speaker appears on nearby devices for set-up without being prompted through Bluetooth settings. There’s no similar feature supported for iOS devices.

There’s also no voice assistance, which is rare for portable Bluetooth speakers, but it can connect to two devices simultaneously. There’s no mention of the Bluetooth standard, but the wireless range is numbered at 40m. Having set the speaker at one end of my garden and walked to the other end with The Beatles’ Hey Jude playing at full blast, the speaker didn’t lose connection at any point.

The Wonderboom 3’s story has been of minor changes, but the most profound change comes in the tuning of the speaker’s audio. It makes the Wonderboom 2’s performance sound brash in comparison.

The change is most noticeable in the Wonderboom 3’s tone. Where the Wonderboom 2 was full of beans on the audio front; crisp, sharp and energetic in its approach. The latest model strikes a better balance: clearer, more detailed and with a more rounded bass performance.

With Credence Clearwater Revival’s Fortunate Son pumping through both the Wonderboom 2 and 3, the threequel is much better at preserving the vocals within the mix, as I can hear more of what’s being sung, and there’s more depth apparent to the soundstage. Listening to another 60s classic in the Mamas and Papas’ California Dreamin’, and again there’s a noticeable boost and clarity to voices, as there is to the instruments too – the bell in the track rings more clearly and distinctly than it does on the Wonderboom 2.

After a few hours of listening, it’s clear that the Wonderboom 3 is the more balanced of the two, with a smoother performance that’s not at the expense of detail. Treble notes don’t register as crisply as they do on the older model, but they are crisp enough and there’s more detail to lap up – the artificial cymbal crash in Nelly Furtado’s Maneater is defined with more confidence. The midrange is more spaciously decorated allowing more room for the vocals, and the bass is weightier – the Wonderboom 2 is punchier by comparison.

There are aspects where the Wonderboom 2 keeps its lead. For one, it sounds louder at similar volume levels. Secondly, it’s more dynamic in describing the difference between loud and quiet notes and thirdly it offers more energy. Those strengths, however, make the Wonderboom 2 a little unrefined, like a ball of energy ready to explode.

The Wonderboom 3’s pared-back sense of energy and difference in tone makes the lack of stereo pairing more understandable. It also makes the Wonderboom 3 the more nuanced performer and in my mind, a satisfying improvement.

Better sound for the same money If you’re in the mix for a portable speaker at an affordable price then the improvements, slight in some cases, make the Wonderboom 3 one of the top contenders

If you have the Wonderboom 2 The Wonderboom 3 isn’t a massive upgrade over the previous model and perhaps for some that’s not enough to splash close to £100 again.

The third Wonderboom doesn’t chart a course that massively differs from its previous direction, but it does sound better than previous incarnations – it is the best-sounding Wonderboom speaker so far.

Some may rail against the lack of USB-C charging, but the extended battery life ensures this is one of the longer lasting efforts in its price category. Google Fast Pair adds convenience, and the speaker remains just as portable and durable as ever.

Others may view the Wonderboom 3 as a safe update and in a sense, it is – for those with the Wonderboom 2 there’s no massive rush to upgrade. Nevertheless, if you’re after one of the better-sounding portable speakers under £100, that’s exactly what you get with Wonderboom 3.

Does the Wonderboom 3 support stereo pairing with older generations?

The Wonderboom 3 can only be paired with another speaker from its generation. It does not support stereo pairing with the Wonderboom 1 or 2.