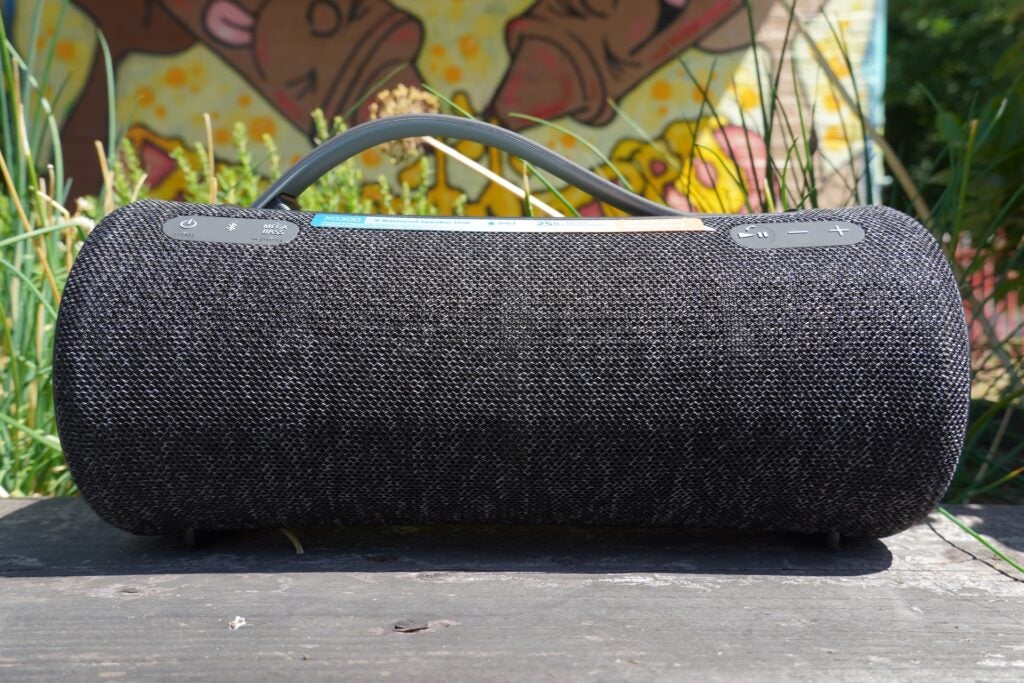 A portable wireless speaker that delivers extensive battery life and rich sound quality. The SRS-XG300 lives to entertain at parties or outdoors, and does so at a price that’s very attractive.

Not the most detailed presentationA little heavy to carry


IP ratingProtected against ingress of dust and water

The XG300 is part of Sony’s range of X-Series wireless party speakers, ready to be used indoors and out, and boasting the kind of sound that’s a party starter.

Its versatility puts it up against a range of other wireless speakers, but it doesn’t boast as high a price tag as you’d expect. Has Sony found the x-factor with its plus-size portable speaker?

The SRS-XG300 is the biggest of the new X-Series portable speakers by a country mile (well, not literally). It’s like a mini-boombox speaker measuring 318mm wide. It isn’t designed for vertical playback and it’s a big speaker to cart around.

So the XG300’s retractable handle proves useful, especially since the speaker’s 3kg weight puts it at the upper end of portable units. It’s it in the same ballpark as the Sonos Move, Harman Kardon Citation 200 and Bang & Olufsen Beolit 20, and of the Sonos and B&O speakers, I’d say the XG300 feels the heaviest to lift.

Aesthetically, the XG300 is an elegant-looking party speaker for its size. It has a slight hourglass shape, narrowing in the middle and widening at either end, and is covered in a knitted fabric that’s available in smart black or grey versions. With an IP rating of IP67 – the same as the smaller Wonderboom 3 and Emberton II – it’s protected against the ingress of dust and water.

Below the carry handle are buttons on either side of the unit. On the left are the power, Bluetooth and Mega Bass buttons and on the right are the playback/call and volume controls. Presses don’t require much force and there’s a click with each press to indicate it has registered.

Around the rear is a flap that conceals the connections and a few other buttons. There’s USB-C for charging another device, USB-A port for charging the speaker itself (with plug adapter included), and stereo mini-jack (cable also included) for plugging in an external device (such as a portable music player). The buttons include the Battery Care feature (more on that later) and the Light feature.

The Light feature – or Ambient Illumination, as Sony terms it – emits a halo of light at either end of the speaker, just behind the woofer. It changes and pulses in sync with the beat, but at its default setting it isn’t the most noticeable. Unless you were viewing it from the side or in dimly lit room, you wouldn’t notice the light show taking place.

Battery life is quoted at 25 hours, and for a speaker of the XG300’s size, that’s substantial. Compared to the 8 and 11 hours respectively of the Beolit 20 and Move, the SRS-XG300 figure puts those speakers in the shade.

The Battery Care feature I mentioned earlier helps preserve battery life. It doesn’t conserve and extend battery life – although there is a feature for that as well – but stops the speaker from overcharging so that the battery unit itself can last longer. There’s fast-charging support, too, with 10 minutes seeing another 70 minutes of playback.

Google Fast Pair is onboard for swift pairing with Android devices; no such feature for iOS is provided. The speaker can act as a speaker phone for calls, which adds an unexpected level of versatility for what’s marketed as a “party” speaker. The Echo Cancelling tech onboard aims to prevent lag or echoes during calls.

You won’t get any voice assistance here; Google and Alexa control is rare for portable Bluetooth speakers, with the B&O Beosound A1 2nd Gen the only portable I’ve come across that has voice assistance.

The SRS-XG300 does offer app support – from two apps, in fact. Sony’s Music Centre is the app for managing updates, battery life, sound quality and the illumination feature.

The app offers EQ sound options (Mega Bass, Live Sound, Custom), Sony’s ClearAudio+ (which seems to enable Mega Bass anyway), DJ effects (Isolator and Flanger for some fun) and Bluetooth connection quality – enable priority on Sound Quality and the XG300 will play in LDAC Bluetooth if a mobile device supports it (iOS doesn’t). If not, there are SBC and AAC Bluetooth codecs. Wireless range is also solid: walking away from the speaker to the other end of a large garden saw no break-up in the signal noted.

In the Power section is the Stamina feature that suppresses power consumption, which is useful for eking out more battery life in those instances there isn’t a means to charge the speaker. The Illumination area presents more noticeable light effects such as Rave, but I’d still say you need to be in a dark environment to appreciate it.

The Fiestable app is more party-orientated, offering expanded control over DJ effects, light effects (you can change colours on the fly with Party Flash) and Motion Control, which is nifty – when it works. Playback and volume can be controlled by moving the smartphone, although some movements register better than others. Trying to change the volume made it look like I was trying to get my rave on. I suppose that’s the point.

Back to the Music Centre app and there’s support for apps such as Amazon Music, Qobuz, Deezer, Tidal, Spotify and YouTube Music, although this only translates to be whisked away to said app (any app already on a mobile device can be added to the list).

The Voice Command isn’t voice control, as it pertains to searching for something (singer, song, etc) and being taken to an app (Spotify and YouTube) that shows related results. It only appears to bring results with the first word you say, so if you’re searching for Lady Gaga, say “Gaga” rather than “Lady” – otherwise the end result is a list of mixed results that contain the word “Lady”.

Like virtually every other party speaker, the SRS-XG300 can be paired with a ridiculous and in no way feasible number of speakers unless you were trying to break some sort of Guinness World Record (100). Stereo pairing is also supported with another speaker.

The SRS-XG300 is in-keeping with Sony’s recent headphones – the WH-1000XM5 and WF-1000XM4 –in terms of its presentation: rich and smooth with an emphasis on bass. If you’re someone who wants neutrality and precision, you won’t get as much of that here as you would from the Sonos Move – but this is a “party” speaker, after all.

It boasts a wide soundstage thanks to its shape, although there’s no 360-degree spread of sound, and that makes the XG300 a very directional speaker. I found it best to be standing/sitting towards the speaker, since it doesn’t disperse its sound out towards the sides. Sitting behind it, I can hear music; but it sounds a little shrouded.

The Mega Bass feature does add a little more meat to the bassline when listening to 112’s Peaches & Cream, Nas’ If I Ruled the World, and Katy B’s Katy On a Mission; but I wouldn’t describe the Mega Bass effect as overtly affecting the mid-range and treble performance.

I’d say Mega Bass is tastefully applied than overbearing and distracting, the X-Balanced speaker driver setup maintains a solid balance across the frequency range. When turned up loud there’s no obvious distortion I heard listening to The Beatles Hey Jude – but, perhaps surprisingly, the smaller JBL Charge 5 hits louder volumes.

The rich character of the speaker offers likable benefits. The bass is more textured than you’ll find on more expensive speakers such as the Move – Nelly Furtado’s Maneater displays a more assertive low-frequency performance with more energy and drive than the Move can muster, although the Beolit 20’s bass is bigger than both, I should add.

The smoothness of its playback is enjoyable, too, especially with voices, such as Isabella Manfredi’s in The Preatures’ Is This How You Feel? Its reproduction of voices is natural enough; they’re satisfyingly big in their description, although they register with a touch more bass and weight than you’ll find on other portable speakers of the XG300’s ilk. If you enjoy this smoother, richer presentation then the XG300 will have plenty of appeal.

Where that richness presents some blemishes is that the Sony’s retrieval of detail isn’t as good as the Move, lacking that extra ounce of sharpness and definition that would give it an even greater clarity.

The high-frequency range is another area where its rich presentation has its most obvious effect. There isn’t the same level of sharpness or tonal variation of treble notes than there is on the Move with Gogo Penguin’s Raven and Gerald Clayton’s Rejuvenation Agenda; the SRS-XG300’s warmer presentation isn’t as precise or as clear as the Move’s sharper, neutral tone.

But this takes little away from the Sony’s sound quality. It’s a warm, rich and smooth performance that works well for party environments and outdoors – and it’s a cheaper proposition than either Sonos, B&O or Harman Karman.

For the party animal inside you The SRS-XG300 can go pretty loud and big, but it’s the party features in the apps that add more fun to proceedings over more traditional wireless speakers.

If you want more detail and precision The Sony isn’t the most of neutral-sounding of speakers for those who favour accuracy, and its treble performance is a little blunted.

Consider the SRS-XG300 for what it is, and it’s a very satisfying wireless speaker. The design is considerate, with its retractable handle and strong IP rating (just think of all those dropped drinks at a party), the battery life is longer than more expensive speakers, and the rich sound quality entertains.

The party functions with the various supported apps add more fun to proceedings; and even if it isn’t used for a party setting, it would be a good choice for use on an outing to a park, beach or garden.

If a smaller, more manageable size is preferred, there’s the option of Sony’s own XE200 and XE300, but for those after a big, inviting sound that can grace both outdoor and indoor settings, the SRS-XG300 is happy to assist.

How long is the Sony SRS-XG300 battery?

Sony states that the battery life is around 25 hours.

Does the SRS-XG300 support voice assistance?

The XG300 doesn’t feature any native voice assistant support for the likes of Alexa or Google.