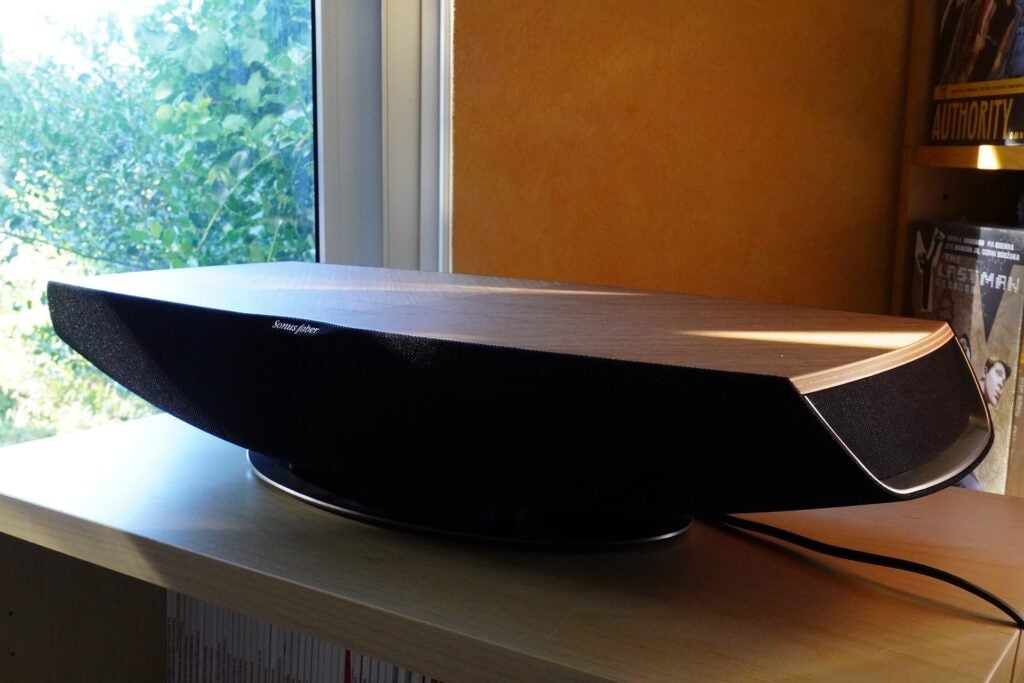 A luxury wireless speaker offering elegant looks and excellent sound, the Sonus Faber Omnia is tailored for the streaming age but can work with turntables and TVs, too. Its expensive, but great quality audio often is.


TVHDMI ARC for connecting to a TV

Surprisingly for a brand that has lots of heritage in hi-fi speakers, the Omnia is Sonus Faber’s first attempt at a wireless speaker.

Where traditional hi-fi can come across as more complex (who wants to mess around with wires?), the Omnia has ambitions to bring more convenience to the process of delivering great sound to people’s homes.

At £1499, this wireless speaker won’t be for everyone; but for those for whom it’s intended, the Omnia won’t disappoint.

The Omnia comes in a large box that initially gave me the impression it could be a behemoth. However, while it’s big for a wireless speaker, it’s the same width as Bowers & Wilkins’ Zeppelin.

And like the Zeppelin, it’s the shape of the Omnia that will attract admiring glances. Most wireless speakers are, effectively, rectangular boxes; the Omnia isn’t. From the wooden top panel to its curvaceous midriff, the Omnia looks like a monochord musical instrument from centuries ago. It’s an elegant-looking speaker, its wood surface giving it a natural aesthetic that both stands out and could slip into the room as a piece of furniture.

It isn’t exactly practical, though, especially when partnered with a TV. Its size and depth pose problems that could only be solved if the TV was wall mounted. And while it’s the same width as the Zeppelin, its depth is greater, so space is needed to accommodate the Omnia.

The top area, or what Sonus Faber refers to as Senso, is a touch-sensitive wooden surface offering control over power, playback and volume. There are illuminated lines (feedback LED stripes) and quite what each one does will be a mystery at first. The bottom line shows the current volume level, but those above require consultation with the (online) manual to decipher.

The control line between the two volume dots signals the source to which the speaker is connected. Bluetooth equals blue, HDMI is orange, Phono pink and Streaming is white. Within streaming there are even more options that the Omnia regales its user with: AirPlay is white, Chromecast yellow, Spotify green and Tidal is light blue. The Senso surface can just about be seen from a seated position, although its clearer to see from a standing position.

Connections are hidden in the speaker’s integrated stand, and space is something of a premium in this area; the Ethernet port, power and HDMI port are tightly packed together, which makes plugging in a cable an inelegant process. A phono adapter is supplied to extend it away from the connection area. Finishes come in Walnut and Graphite and relate to the appearance of the top surface.

The Omnia’s wireless support is wide-ranging – as you’d expect for its price. There’s AirPlay, Chromecast, Bluetooth (aptX-HD), Spotify Connect, Tidal Connect and Roon Ready support. If you subscribe to Tidal, you’d want to play music from the app natively, not via Chromecast, since Google’s wireless protocol doesn’t support MQA for higher-resolution audio streaming.

Connecting to Bluetooth and Chromecast sources is a doddle with the remote, which incidentally looks like a smaller version of the speaker itself. Set-up on a wireless network is achievable through Google Home, so bear that in mind if you don’t have a Google account.

Connectivity in general is excellent, granting the Omnia plenty of versatility in how it can be utilised within the home. There’s the aforementioned phono adapter for connecting to a turntable with a built-in phono stage that you could, if need be, bypass completely. The HDMI ARC port is for connecting to a TV; the audio settings on a TV need to be changed to PCM to pass-through audio.

The Omnia demands a high cost, but it isn’t everyday you’ll encounter wireless speakers of this quality. Used on its own or connected to a TV, the Omnia delivers excellent high-fidelity audio.

This is a speaker that produces a sound that’s unerringly clear and articulate, with a bass performance that’s varied and textured. Vocal quality is terrific and, for a speaker of its size and shape, it delivers a sound that’s bigger than its dimensions. It showcases a surprising amount of depth and a better stereo performance than the (considerably less expensive) Bowers & Wilkins Zeppelin, for example.

With a Hi-Res/96kHz stream of John Williams’ Rey Theme over Chromecast from Qobuz, the Omnia whips up a high-frequency performance that captures the oboe and strings of the orchestra in a wonderfully clear and precise manner. The track’s dynamic shifts are gracefully expressed, and its rhythmic ability is fluid and engaging, whether dealing with steady tracks or music that requires a faster tempo. The level of control the Omnia exerts over music is to be admired.

Its dynamic range is good; highs are crisp and clear, while bass frequencies – such as that in Kingdom’s Bank Head (feat. Kelela) over Tidal – are offered a solid presence and with a fair amount of extension. Tonal balance feels spot on across the frequency range, with nothing sticking out; the Omnia sounds full, spacious and clear.

Detail within the mid-range is uncovered with significant clarity and detail. In Michael Giacchino’s Can’t Fight City Halloween from The Batman soundtrack (Qobuz), instruments within the mid-range are described with precision and tact, bringing out the textures and harmonic variations of each one. This etches out the speaker’s dexterity in its sense of dynamism as the track builds and builds to its crescendo.

The track also reveals this speaker comes packing a good deal of power in its speaker setup, with 490W made available to give it headroom, especially at louder volumes. I doubt you’d need to turn up the volume particularly loud to hear what the Omnia can do, unless you’re after more attack and energy – which the Omnia can duly supply.

The soundstage is spaciously described, and I can’t say I ever felt that instruments or voices were ever obscured within a song. The Sonus Faber Omnia treats voices cleanly and clearly. On an older track such as California Soul (Tidal), Marlena Shaw’s vocals are positioned above the rest of the band, so they aren’t lost in the track’s more energetic parts, while in Faye Webster’s Sometimes, it’s a smoother rendition of her voice over the Zeppelin’s crisper portrayal.

The speaker’s stereo image and sense of depth are more noticeable when you’re sitting close to the speaker – from afar the effect melds together, and although the Omnia sounds big, the width of the soundstage doesn’t extend beyond its dimensions with music.

Partnered with a TV, the Omnia presents a smoother sound than a TV. Voices match their placement on-screen and the Sonus does a good job of lifting and placing effects where they need to be.

Voices come through with clarity on an episode of Falcon and the Winter Soldier (Disney+), and the action scenes that involve the Falcon having to swoop in and save the day exude plenty of energy, dynamism and power that adds excitement to scenes. The Sonus Faber has a good grasp of detail, too, organising the soundstage well enough without causing the feeling that something was lost in translation to stereo.

Is it a true soundbar replacement? It’s good enough to be considered one; but it would only really work with a TV that’s wall-mounted. Placed in front of a TV, it will block the IR receiver for the remote.

For a versatile wireless speaker Music streaming, vinyl records and TV – the Omnia has a vast range of skills to accommodate your listening preferences.

For the expense For most, the Omnia will be too expensive; and compared to its closest rivals – such as the Naim Mu-so 2 – it’s the more expensive option for a similar skill set.

There’s the spectre of price with premium speakers. Some will look at the Omnia and say, “not for me”, and if you are that person then you are not the intended market for this speaker.

This a premium, high-quality luxury speaker for those who can afford it, one that makes the experience of listening to audio relatively simple with its streaming options. It also helps that it sounds great: spacious, big and detailed with any source. It’s a more expensive proposition than the similarly specified Naim Mu-so 2, but there’s no arguing over its quality. In 2022, there aren’t many better-sounding wireless speakers than the Sonus Faber Omnia.

Tested with a range of streaming services

Tested as a TV speaker

The Omnia is a stereo speaker and doesn’t support immersive audio formats.