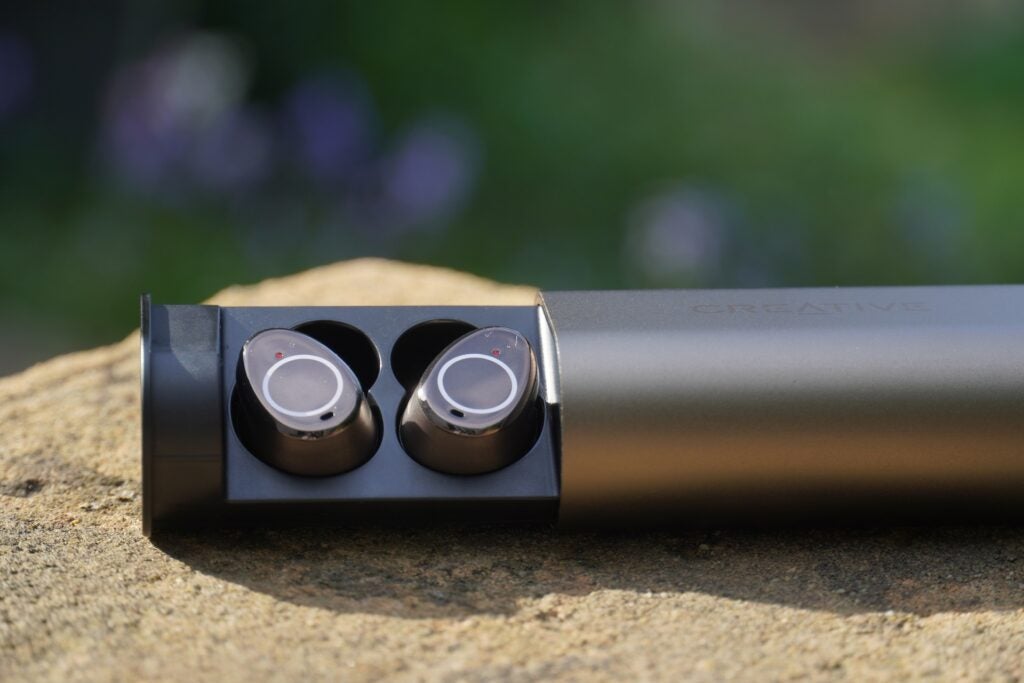 Not Creative’s best-sounding pair of earbuds, but the addition of noise cancellation earns the Pro name over the cheaper models, with touch controls and wireless connectivity also improved. For less than £100, the noise cancelling on the Creative Outlier Pro is very effective for the asking price.


Water resistanceIPX5 rating to guard against sweat and water

The Outlier Pro is Creative’s first true wireless to feature hybrid noise cancellation – and do so for a price of £84.99.

A few years ago, hybrid noise cancellation for less than $100 / £100 would have been a fuzzy dream, only possible if a premium true wireless had been out for long enough to reach that price (like the Sony WF-1000XM3). But now the fuzzy dream is a reality, with ANC true wireless starting at prices less than £100.

But then comes the question of how good can they really be? There’s a degree of compromise to cheaper noise cancelling buds, so what compromises, if any, do the Creative Outlier Pro suffer from?

The look and design of the Outlier Air series has been largely consistent since the first iteration, becoming smaller and lighter with each version. The Creative Outlier Pro return to chunkier stylings of the original along with some outré stylings.

They’re bigger, chunkier and heavier by a few grams. The metallic umber finish is a distinctive one, the glossy finish and reflective surface of the touch area suggest a pair of buds more expensive than their low price would indicate.

The Outlier series has always been one of the best-fitting true wireless and the Outlier Pro fits snugly in. I’ve used these several times for runs and they’ve always stayed put. Ear-tips are provided in small, medium and large-sized silicone tips.

The IPX5 rating is the same as the Outlier Air V3, and should be able to resist a “sustained, low pressure water jet spray” – a light rain shower or spray from a tap – for example, so they could feasibly be rinsed and washed dry.

Operating the Outlier wireless earbuds has been a weakness of the series. The V3 were an improvement over the Outlier Air V2, and it feels like Creative has found its happy place with the Outlier Pro. Perhaps it’s because the touch control surface is larger or more sensitive to presses, but attempts at pausing playback or changing the volume hit the bullseye virtually every time.

That’s not to say there’s not a degree of awkwardness encountered. Double tap on the right and left bud is for play/pause and noise control respectively, while a triple tap skips to the next track on one bud and wakes up your device’s voice assistant on the other. That configuration is initially confusing if you’ve attempted to skip on the right bud and think that the same on the left would result in skipping backwards – at least in the Creative app there’s the option of customising the controls. A hold on either bud is associated with volume control by default.

The charging case’s dimensions have embiggened, but it’s still the same design as before with the push-out tray that reveals the charging cradle. The battery indicator for the earbuds and case are sensibly placed above the USB-C port.

Battery life takes another leap forward and it’s a giant one. The Outlier Air V3 was 40 hours, the Pro model is now 60 hours with 15 hours per bud (the charging case holds three extra charges).

Streaming music for an hour and the headphones were at 94%, and another hour saw them drop to around 86%. That level of performance could see the Creative Outlier Pro reasonably eke out 15-16 hours of use. I can’t think of any true wireless buds with as much stamina, especially with noise cancelling.

The connection issues I’ve experienced with previous Outlier earbuds appear to have been resolved here. First-time pairing out of the case is not as quirky with the wireless connection much stronger and more consistent. Aside from a blip walking through Waterloo station I haven’t experienced a problem. This is the best wireless performance so far from the Outlier series.

Bluetooth codec support is SBC and AAC with Creative seemingly moving away from aptX. Call quality is solid but can be sensitive to the level of background noise. On a normal day I’d describe call quality as slightly better than average, the only major issue was the person on the other end commented that the level of my voice was up and down, and that it became difficult to hear me when the volume went low.

On a blustery day the buds suppressed sounds to the point where my voice became too quiet, the wind causing plenty of distractions. They’re good at keeping most noises at bay but not really suited to gusty weather.

The inclusion of Active Noise Cancellation is a step up from the Outlier Air’s Active Noise Reduction, introducing hybrid ANC to the series which uses feedforward and feedback microphones to cancel noise externally and within the in-ear area.

And the performance the Outlier Pro offers is very good, as good as you can get for less than £100 I’d say. It’s helped by the chunkiness of the bud’s design, the passive noise isolating qualities of the earphones keeps sounds at bay before the noise cancelling gets to work.

With ANC on, the buds thin out noises in a busy food market from voices to the traffic going past and the sounds of food being cooked. On the tube and train it reduces (but doesn’t completely dismiss) the wind going past, and persistent noises like air conditioning are removed. Walking through popular places in London (Waterloo, Southbank) and through train stations, the Outlier Pro’s noise cancelling achieves a sense of quiet that’s better than others at this price.

The Ambient mode is respectable in that I can broadly sense what’s around me. I can hear the hubbub of a food market in Borough, but there’s not the crystal clarity and definition you’d get from more expensive pairs.

It carries a thicker soundstage than the Outlier Air v3, which gives it more presence in the bass regions. A play of Magic Sword’s Only Way In and the bass line is more softly described and richer in tone on the Outlier Pro while the Outlier Air carries with more punch and attack. I actually prefer the Outlier Air’s performance in this regard – there’s more detail to low frequencies – but for those who like a warmer, smoother approach to bass handling then the Outlier Pro has its merits.

The Outlier Air are the better sounding of the two buds: they are clearer, more detailed and energetic performers, but there are instances where the Outlier Pro edges ahead.

They are, for instance, a little better at handling vocals with Tune-Yards’ Hypnotized, which are better protected from the beats when it becomes more energetic around the minute mark, making Merrill Garbus’ vocal stylings more legible.

The same is true of Mikhala Jené’s vocals in Black Love, where the edges of her voice are clipped off with the Outlier Air which is not the case on the Outlier Pro. The flip side of this coin is the level of overall detail the Outlier Pro can retrieve from tracks.

The Outlier Air is much more upfront and aggressive in its approach. From the strum of the guitar to the piano backing that opens Black Love, I can hear more of the guitar strings being picked and there’s more dynamism to the piano notes for a performance that’s much richer in detail.

There’s little difference in the width of the soundstage, it’s more what each earbud does within it that makes the difference. The Outlier Pro don’t sound as spacious or defined, nor are as talented at the top end of the frequency range, sounding duller, less detailed and dynamic with GoGo Penguin’s Atomised. A good listen but not Creative’s best-sounding bud.

They’re not Creative’s best-sounding pair Their smooth and rich presentation irons out the sibilant quirks of the Outlier Air models, but they lack the same amount of detail and overall tonal balance.

The Creative Outlier Pro are the other side of the coin from the Outlier Air v3. Smoother and richer in tone, they are, however, not as detailed and clear as the Outlier Air. The big difference here is the presence of ANC, which is pretty good for the price and the main reason for a purchase.

The bulky design won’t be appreciated by some, but these earbuds fit well and comfortably, while Creative has rectified most of the issues that have plagued their true wireless earbuds in the past, namely connectivity and touch controls. For less than £100, the Outlier Air are pretty great value.

We test every headphone we review thoroughly over an extended period of time. We use industry standard tests to compare features properly. We’ll always tell you what we find. We never, ever, accept money to review a product.

Is there an app for the Outlier Pro?

There are two apps that the Outlier Pro supports in the Creative app, which brings customisation for touch controls and noise cancelling; and the SXFI app, which supports 3D audio.