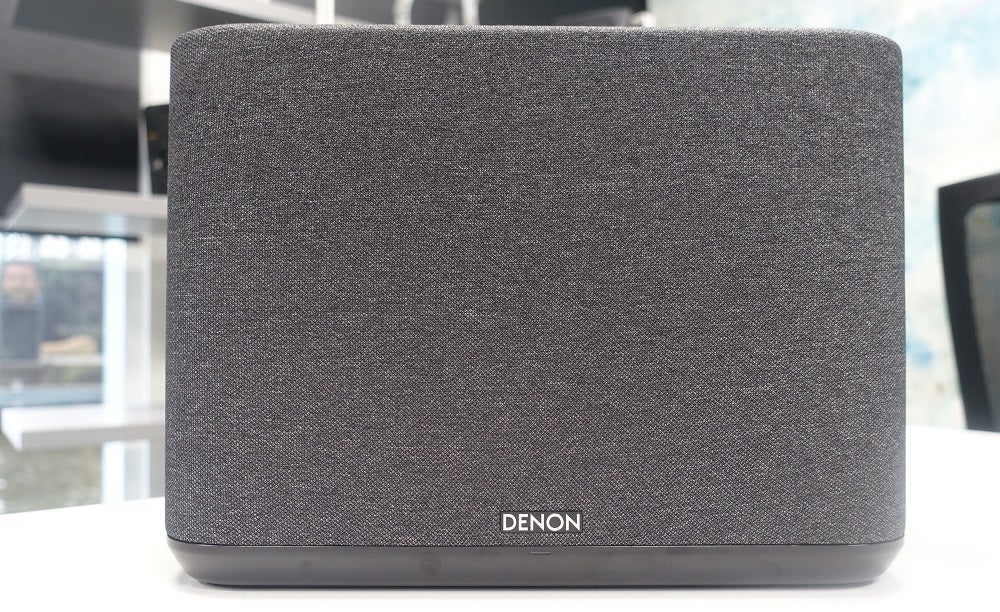 Equipped with plenty of features for the streaming age, the Denon Home 250 may be a rather bland looking speaker, but it boasts a confident performance

For a company with a long and proud tradition of audio innovation – it started knocking out gramophone records, and the players to play them on, as early as 1910 – Denon has proved strangely incapable of taking the wireless/multi-room speaker market by the horns.

While other well-regarded traditional hi-fi brands strode confidently into the brave new world, Denon’s efforts have been, well, underwhelming.

The Home series aims to change that. This is a range of stand-alone speakers that can function as part of a multi-room setup, to double-up for true stereo sound and to join in as part of a wireless home cinema surround-sound system, supported by app and voice-control. Everything any reasonable customer expects their nice new wireless speaker to do, in other words.

This Home 250 is the middle speaker in the current range of three. I get the impression Denon considers it the sweet-spot and, on paper at least, it seems equipped to compete. But looking good on paper has never been the whole battle…

I suspect the design of the Home 250 will divide. At what point does discreet become anonymous? How fine is the line between sophisticated and bland?

Obviously, you’ll make up your own mind on this. The basic facts are these: the Home 250 measures 30 x 12 x 22cm (WDH), so is reasonably sizeable and a little on the tall side. Unless you count a recessed carry-handle and a small light below the logo on the front panel, the word design hardly seems to apply at all. To me at least, the Home 250 is a functional looker in the same way a coffee mug or a crash helmet is a functional looker.

Denon reckons the Home 250 is available in black or white – but the flawlessly applied and quite tactile acoustic cloth wrapping most of the chassis is yours in dark grey or vague ivory. In any event, the build quality and standard of finish here is unarguable. There’s nothing special about the way the few exposed plastics feel, but the Denon bears comparison with most similarly priced alternatives in this respect.

In terms of getting audio into the Home 250, your options are numerous. Dual-band Wi-Fi is complemented by AirPlay 2 and Bluetooth 4.2, and Denon’s proprietary HEOS app allows integration of many music streaming services. Spotify, Amazon Music, Tidal, Deezer, Napster and SoundCloud are all embedded in the app, as is the ability to play music stored on the control device or music servers on the local network.

Physical inputs run to an Ethernet socket, USB input and a 3.5mm analogue socket. These are found at the rear of the cabinet, near the bottom, along with the mains power connection and buttons for Bluetooth pairing and initial connection to your home network.

Once the music is on board, it’s dealt with by a 24bit/192kHz DAC capable of handling (among other formats) WAV, FLAC, ALAC and DSD 2.8/5.6MHz. However, it’s worth pointing out that only Hi-Res audio on the network or stored on a USB storage device will be delivered in full by the Home 250.

Use the HEOS app to stream some MQA-powered Tidal Masters content, for instance, and the Denon squashes it down to a much more prosaic 16-bit/44.1kHz standard. Even streaming via Bluetooth allows the entirety of an MQA file to be played, which makes HEOS a wee bit less helpful than it otherwise could be.

Once the digital information has been transformed to analogue, it’s delivered via two 19mm tweeters and two 102mm mid-bass drivers firing from the front of the cabinet, and a 133mm passive bass radiator shooting from the rear. Denon intends to extract true stereo sound from the Home 250, and to this end, the two tweeters are angled outwards to generate as wide a spread of sound as possible. The front four drivers are each powered by its own Class-D amplifier – Denon claims a combined power output of 80 watts.

At the top of the Denon is a touch-sensitive panel featuring proximity-sensing controls. These are limited to play/pause, volume up/down and three pre-sets for internet radio.

The panel also has the cutaways for voice-control mics. The Home 250 can currently be controlled via Amazon Alexa, Google Assistant or Apple Siri speakers on the same network, and after more than two years of waiting the built-in microphones have been turned on to support native voice control. You can turn these mics off via the touch display on top.

As well as being ready to deliver true stereo sound if paired with another Home 250, the Denon can also function as a surround speaker in conjunction with one of Denon’s HEOS-enabled soundbars. And, of course, it can be specified as a single zone in a multi-room audio setup.

Dynamically rather one-noteSpacious, detailed mid-rangeTransition between mid-range and bass could be smoother

For no other reason than to give the Home 250 every chance to impress, the critical listening starts with a 24-bit/96kHz file of Moondog’s Bird’s Lament stored on the local network. And the sound the Denon serves up is as confident and wide-ranging as its on-paper specification – and as fractionally diffident as its design language.

Tonally, it’s impressive. Low frequencies display adequate punch and substance, and there’s more than enough textural detail to make the differences between blown and plucked bass sounds absolutely apparent. Despite that relatively large passive radiator taking up so much space at the rear of the chassis, there’s decent control of the low-end on display, too; bass notes attack and decay convincingly.

The mid-range is equally well resolved, with plenty of fine detail giving proper timbre and character to the tune’s assembled brass instruments. There’s a similar sense of control here, and sufficient organisation to keep each individual element secure in its own area of the sound stage. Given the size of the Home 250 and the proximity of its drivers, the sound stage it generates is reasonably spacious and well defined.

At the top of the frequency range, it plays reasonably safe – which is a blessing at higher volumes but can make things sound a little blunt when playing at more reasonable levels. But while the Denon doesn’t offer quite as much top-end attack as is ideal, it isn’t short of substance.

The higher frequencies get on very well with the mid-range – the handover from the top of those mid-bass drivers to the tweeters is achieved super-smoothly. The journey from mid-range down to bass isn’t quite so drama-free, however – the fact that the Denon’s bass doesn’t crowd the mid-range is commendable, but there’s a definite gap or concavity at the point where the lower frequencies give way to the mid-range. It makes the journey from the top of the frequency range to the bottom just a little more disjointed than it otherwise would be.

Switching to a Tidal Masters file of Stormzy’s Vossi Bop via the HEOS app (and then literally wincing as the app reveals it’s being delivered at 16-bit/44.1kHz) lets the Home 250 showcase both its low-end vigour and mid-range detail. Despite the reduction in resolution, the tune powers forward with all its bite and momentum intact.

In dynamic terms, the Denon is a little one-note; it goes plenty loud enough, but the dynamic variance between quite quiet and very loud in the same recording is flattened out somewhat. Harmonic dynamic variances fare a little better – there’s plenty of insight into Nina Simone’s vocal technique during her reading of Isn’t It A Pity? and it’s a gratifying listen as a result.

If you like your sound muscular and expansive Reasonably big on bass with a spaciously adorned mid-range performance, the Denon does play it safe at the top-end

You want proper Hi-Res playback While the Denon can play files up to 24-bit, it’s only through the USB port and not wirelessly

Allocating this sort of money for a wireless speaker means there’s plenty to choose from. If you’re already in the Denon HEOS ecosystem, of course, that’s neither here nor there – but for the rest of us, there are at least a couple of alternatives worth considering.

The Sonos Move, for example, may not be absolutely perfect but it certainly has its areas of excellence. It can join in a Sonos multi-room system, it’s portable (up to a point), and it has a bigger and even more confident sound than the Home 250.

Upping the spend a little brings the Harman Kardon Citation 500 onto your radar. It doesn’t look dissimilar to the Denon, but it’s a nicer, more tactile and slightly better proportioned unit. It’s a slightly better-realised listen, too.

Bowers & Wilkins’ Flex shouldn’t be discounted, either. It’s a fair bit smaller than any of the other speakers mentioned here, but it’s a potent enough listen – and an interesting unit to look at where these alternatives are as bland as warm milk.

How many watts is the Denon Home 250?

The front four drivers are each powered by the Home 250’s own Class-D amplifier, with Denon claiming a combined power output of 80 watts.