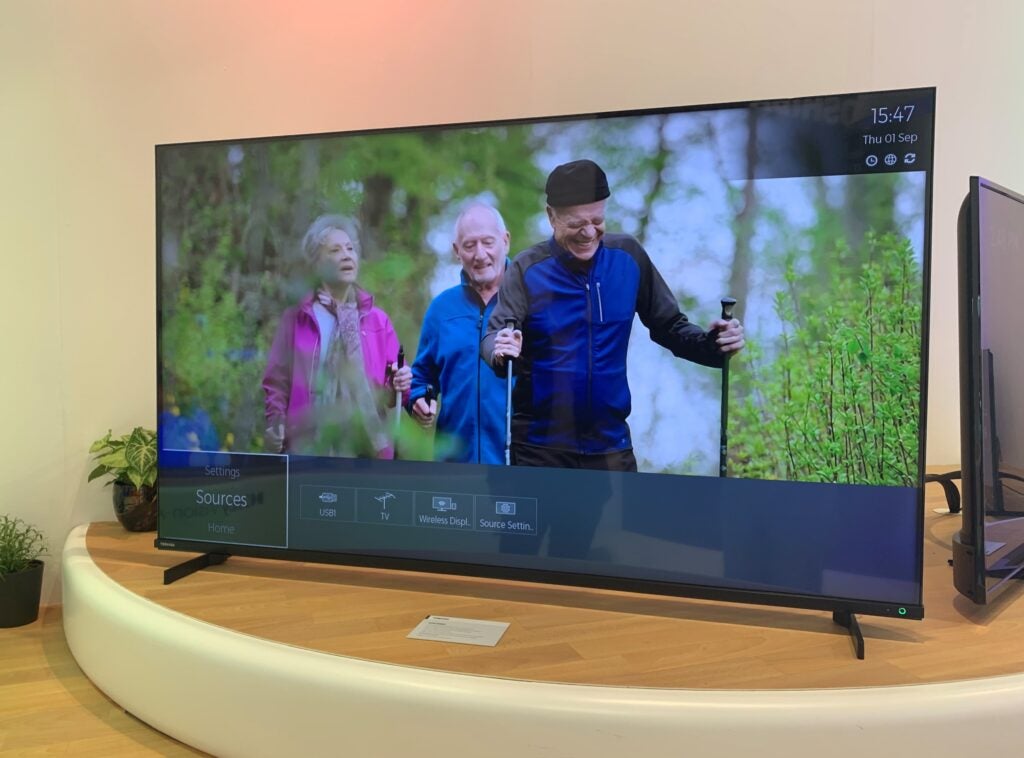 I only spent a brief amount of time with the Toshiba UK4D at IFA. However, the mid-range TV has a modern, frameless design and supports a good range of features, including Alexa voice commands and a number of benefits powered by Toshiba’s Tru Picture Engine.

I got the opportunity to spend some time with the UK4D back at IFA ahead of its availability in shops. Here are my initial impressions of Toshiba’s latest TV offering.

The UK4D features a sleek appearance with a frameless design on all sides aside from the bottom section. This gives the TV a modern look and ensures all attention is directed towards what’s on screen. The bottom bezel features a muted matte black finish, the Toshiba logo on the left and an indicator light on the right.

It stands on two skinny plastic feet which feel less intrusive than the rectangular stand that held up the UK31. The feet were the most obvious visual change looking at the two TVs side-by-side and, like the frameless design, their discreet design ensures that distractions are kept to a minimum.

Another new design detail here is the microphone, which has been given a more subtle position tucked below the screen instead of in the bezel. I found it difficult to know the mic was there without crouching in front of the screen to see below the frame.

The TV comes with a Toshiba remote. The remote looks very similar to the one that comes with the Toshiba UL21, with the same two-tone silver and black appearance, number pad and playback controls. However, along with the Prime Video and Netflix shortcuts, it also includes dedicated buttons for YouTube, Twitch and Rakuten TV.

The UK4D runs Toshiba’s own interface rather than Android TV, meaning there’s no access to the Google Play Store. However, there are still a wide number of apps available that includes streaming services such as Netflix, Prime Video and YouTube and social media sites like Facebook and Twitter.

The interface pops from the bottom of the screen, allowing you to browse apps and settings without turning off what you’re currently watching.

Some key features here include HDMI 2.1 support with Auto Low Latency Mode (ALLM) for gamers, and Alexa built-in. This allows for control over the TV through voice, along with any other Alexa-enabled smart devices in your home.

It’s difficult to speak on the performance of the TV having only spent a brief amount of time, but I found the picture to be very sharp and the colours vibrant but still realistic. Skin, in particular, appears warm and lifelike, while reds and oranges are also on the warmer side.

The TV also offers decent contrast, though it’s not as rich on contrast or saturated colours as those on show with the Quantum Dot model Toshiba had displayed.

However, while the Quantum Dot TV was definitely the more eye-catching of the two, I do think the UK4D produced more realistic-looking colours overall. Though, again, it’s difficult to determine the colour accuracy without testing the TV in a full review.

I can’t comment on the audio quality in this first impressions review as the TV had no sound available in the showroom. However, like the other TVs in the new lineup, the UK4D features Onkyo speakers. It also benefits from optional sound enhancement from Dolby Atmos and DTS Virtual X.