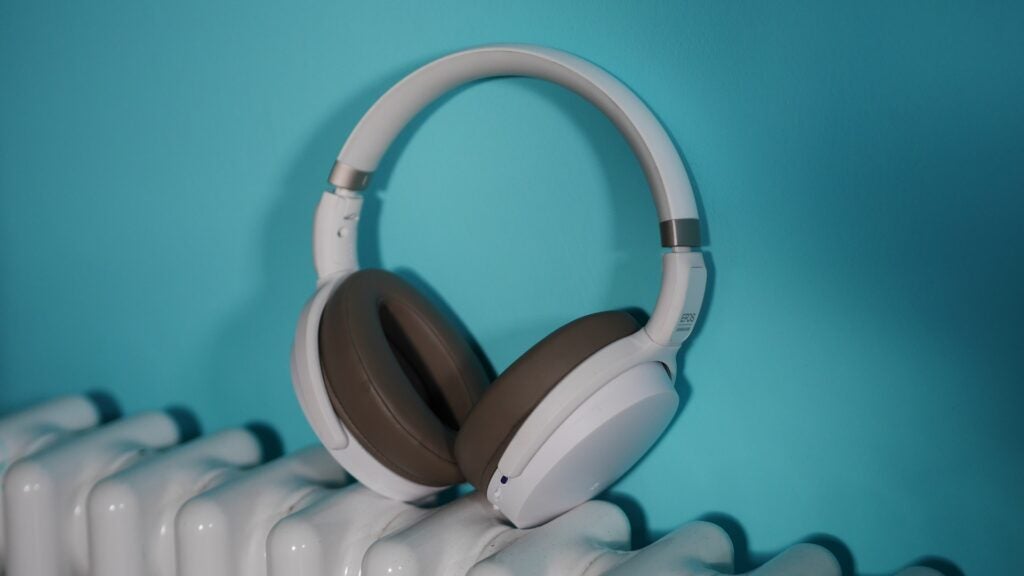 The EPOS Adapt 360 are a premium set of headphones aimed at music lovers and home workers alike. They offer solid sound quality, good-enough microphone performance, a comfortable design, and multi-point Bluetooth support, which alone is enough to make it worthy of consideration. If it wasn’t for a lack of limited codec support and fiddly controls, it would be fit for a recommendation.


BatteryUp to 46hrs of battery life

The headphone market in 2022 is approaching saturation point: from ultra-premium to budget offerings, there is ample choice for those looking for a new set of cans.

Although this is good news for the consumer, for manufacturers, it means a challenge of how to stand out from the crowd.

For EPOS Adapt 360, the solution is somewhat left field and remains relatively untested: to offer a device that will appeal equally to music lovers and business buyers. This headphone has all of the high-end audio chops that might be expected for the price while maintaining an office-appropriate design and a focus on microphone performance, which will be essential for any success in the workplace.

Of course, the danger of too broad a focus is becoming a jack of all trades, master of none. So do the EPOS Adapt 360 headphones do enough to earn a place on your ears?

So what does a business-centric set of over-ear headphones look like? Taking the Adapt 360 as an answer, it seems that the ability to blend in is key.

On the spectrum of design – where the likes of Beats and the Apple AirPods Max scream their presence – the Adapt 360 exists as their opposite. Coming in either a tasteful white or black, these cans won’t stand out, and that is the point. That said, they look suitably premium and have a solid, robust feel without being excessively heavy.

Crucially, they are also comfortable to wear. Over long calls or listening sessions, there was no rubbing, and I noted the lack of heat build-up around the ears. The padding around the ear cups does a good job of shielding the ear from outside noise, as well as allowing a slight flow of air. If you have a call-heavy workflow or a long commute, or you like extensive listening sessions (or all of the above), the Adapt 360 will fit in well with your life.

The positive impressions from the look and feel somewhat dissipate when it comes to the on-device controls. Crowded on the right cup, there’s a plethora of options, from track skipping to Bluetooth connectivity and more. But with three buttons, a joystick and two ports, the cup is crowded, and it’s difficult to make quick adjustments without having a closer look.

Although touch-centric controls haven’t quite been perfected yet on headphones in general, the use of physical buttons here is an impediment to general use. For example, the ability to summon a virtual assistant is available but only achievable via a small button that is nigh on impossible to easily find by touch alone while wearing the headphones.

The presence of a 3.5mm headphone jack means that the device can at least be plugged in and used even when it’s out of battery. The USB-C charging port makes a quick top-up easier than it would be with micro-USB, both of which are nice additions.

Given the different target audience, the features on the Adapt 360 aren’t always what would be prioritised for a purely consumer-focused set of cans – but that isn’t to doubt their usefulness.

Firstly, the inclusion of multi-point Bluetooth is highly welcome and a lifesaver in some situations. Fiddling with a Bluetooth connection and switching devices while also trying to answer an incoming call is no one’s idea of fun, and thanks to this feature, it’s a thing of the past. The headset can effectively connect to several devices at once, switching audio on the fly to whichever one is active.

Given the price of £219, it’s unfortunate, however, that a wider array of Bluetooth codecs is not offered. With only SBC and aptX, the Adapt 360 lags behind the competition in this regard.

Another plus is the included active noise cancellation, which works well for the most part. Blocking the noise of a busy street as well as a general office set-up, I found it to be mostly effective if not quite up there with the best currently available. If you have an especially noisy workspace, you might wish to consider another option, but for most, the cancellation will be sufficient. No pass-through mode is available.

A more unusual focus with the Adapt 360 is on microphone performance. While most headphones include a microphone, very few offer anything other than middling call quality. Against this metric, the call performance on the Adapt 360 is good for the most part. On Teams calls, there was no distortion, and I had no issues with sound quality, which is a win in itself. Given that this is a key focus of the device, it shouldn’t be a surprise that the microphone performs well – but it is never a given.

Battery life is rated at 46 hours, which proved to be quite variable in practice. With multiple Bluetooth connections active and a call-heavy workflow, you will need to charge this set at least every other day.

An app, EPOS Connect, which promises audio customisation, is available, but at the time of review, the app refused to connect to the Adapt 360 via iOS, Android, and Windows 10.

While the marketing of the Adapt 360 focuses a great deal on its suitability for the workplace and Teams certification, there is also the promise of “high-quality stereo sound” for standard listening.

No specifications regarding range or driver size are available, so the question then comes down to the feel: which genres best suit the Adapt 360 and which don’t.

Immediately upon listening – and as might be expected, given the promise of stereo sound – the Adapt 360 reveals an impressively wide soundstage. Everything is nicely centred, making listening to live acoustic tracks a pleasant experience in particular.

Bass performance, while clear, lacks warmth but delivers plenty of energy in general. On the whole, trebles and vocals are bright, although never excessively so, and as a result, pop music in particular is represented well.

Indeed, other than the likes of aggressive punk or a few other genres, the profile of the Adapt 360 is balanced enough to work with most song selections. Those who really want pounding bass would be best to look elsewhere, but for others, these will work well as a generalist option.

If you need a Teams-certified headset The EPOS Adapt 360 is made to handle calls first and foremost.

The EPOS Adapt 360 are an interesting set of cans. By adding a focus on workplace use, it offers something that few of its competitors can directly challenge. This can be seen in the design and microphone performance in particular.

At roughly £200/$200, however, the competition is strong. Although most of the market may not have as much of a specific focus, they offer other useful features as a compromise, including better durability, rated water resistance, and superior noise cancellation.

With nice styling, good sound quality and multi-point Bluetooth support, the Adapt 360 gets a lot right, but it’s let down by slightly clunky physical controls and a buggy app. The fact that some of its rivals offer better value is therefore unfortunate.

If you need a Teams-certified or office-focused set of cans and can accept nothing else, then the Adapt 360 is made for you. If not, then it may be best to look elsewhere.

We test every headphone we review thoroughly over an extended period of time. We use industry standard tests to compare features properly. We’ll always tell you what we find. We never, ever, accept money to review a product.

Tested with real-world use.

This model supports active noise cancellation, but it doesn’t come with a transparency mode.