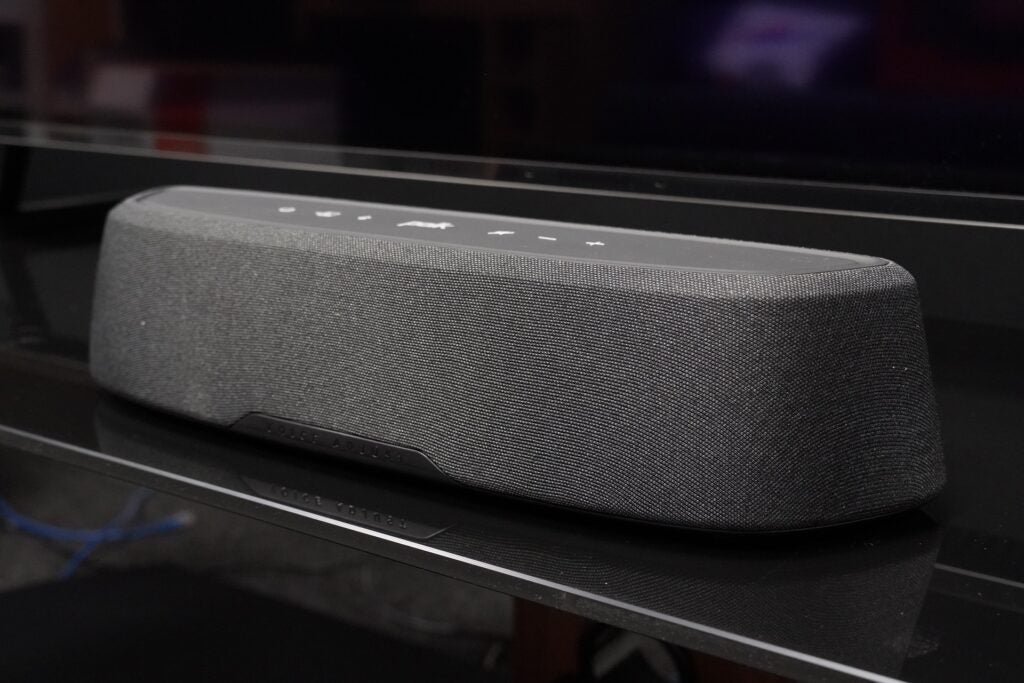 One of the more convincing attempts at an ultra-compact immersive soundbar, the Polk MagniFi Mini AX delivers a sound that’s bigger and more dynamic than expected.

Sub can hog the attention at timesNot truly immersive

You’d have thought that with immersive formats, such as Dolby Atmos and DTS:X, bigger is better. But bigger often means more speakers and more space at a greater expense.

So, rather than going bigger, brands have been getting smaller and more compact. Surround sound setups remain an option for some, but for others, a small soundbar is all that’s required.

That’s where Polk’s MagniFi Mini AX enters the discussion. There’s been a surge in compact soundbars since the Sonos Beam kicked things off several years ago, but recent times have seen teeny bars, like the LG Éclair, appear. Can a big sound flourish from such a small enclosure?

Pint-sized is an apt descriptor of the Polk MagniFi Mini AX’s proportions. The main soundbar is 366mm wide and 79mm tall, which is actually bigger than the LG Éclair but still relatively tiny in the grand scheme of soundbars.

Because of its size, the MagniFi Mini AX is best suited to TVs with screens of 50-inches and smaller. But having tried it with a 65-inch OLED, the Polk still managed to spread its sound to cover the bigger screen.

There’s a semblance of modest style, with its acoustic mesh fabric covering the midriff, but the unrelenting grey-black colour scheme ensures this isn’t a speaker to steal attention from a TV – nor should it.

Hidden within the fabric mesh is an OLED display that’s visible from a seated position, showing which soundtrack is playing, source, and audio mode.

On the top surface, there are physical buttons for power, source, Bluetooth, and volume, while around the back, you’ll find HDMI eARC, digital optical out, auxiliary, and USB connections.

There are also status lights that signal whether the unit is connected to Wi-Fi, the subwoofer and surround speakers, plus a Connect button for joining it to other speakers.

The MagniFi Mini AX also comes with a downward-firing subwoofer that dwarfs the main unit. As it’s wireless, there’s no cable required, but Polk Audio recommends it’s placed on the same wall and as close to the TV as possible, with no more than a 10m distance between the sub and the main unit.

The remote is fine – small, with all the necessary buttons (and a few more) to operate. I do wish pressing its buttons provided more feedback, as these feel shallow and aren’t always responsive to touch.

The Polk MagniFi Mini AX supports both Dolby Atmos and DTS:X, which is not always a given, as Dolby’s presence across streaming services seems to have kicked DTS into touch.

But simply playing an Atmos or DTS:X track doesn’t necessarily mean that the soundbar is playing in “3D”. In fact, for a bigger, more expansive soundscape, the MagniFi Mini AX needs to be in its 3D Mode, something Polk doesn’t convey all too well unless you bother to read the manual. Other modes include Music, Movie, and Night, which can be accessed through the remote.

Unlike the LG Éclair, the MagniFi Mini AX allows you to stream from a variety of sources. Those include Bluetooth 5.0, along with Chromecast, AirPlay 2, and Spotify Connect over Wi-Fi. The USB port on the rear can be used for firmware updates or playing music, but it’s limited to MP3 files.

Connection to Wi-Fi is done through Google Home, which is a simple enough process, but I always get nervy during a product update – it often confuses itself if the update takes longer than usual.

Polk also includes its VoiceAdjust technology, which it claims raises the volume of dialogue in TV programmes and films without amplifying other sounds.

There’s a five-speaker array in the main unit, with two 19mm tweeters (left and right) alongside a left-centre-right (also known as LCR) array of 51mm mid-drivers. The sub has a 127mm x 178mm woofer, which, in the more common parlance, makes it an absolute unit.

There’s no voice control and, therefore, no native support for Alexa or Google Assistant. There is an upgrade path by adding the SR2 surround speakers, which cost £159.

Given the MagniFi Mini AX’s petite dimensions, it would be unrealistic to expect true up-firing speakers to fire sound towards the ceiling, and that turns out to be the correct assumption. Polk uses its patented SDA (stereo dimension array) technology to expand the soundstage and manoeuvre effects to achieve the impression of multiple speakers around you.

But I don’t think it achieves the effect it’s going for, nor does it sound immersive in the true sense of the word. However, that doesn’t mean this isn’t a good soundbar experience. It’s the most satisfying I’ve come across from this recent trend of ultra-compact soundbars – better than the LG Éclair and the Creative Stage 360.

Things start off on a disappointing note when watching The Batman in the Movie mode. Despite the MagniFi Mini AX telling me the film is in Atmos, there’s none of the expansiveness I’d expect. Robert Pattinson’s moody voiceover takes priority in the opening scene, with the music placed anonymously in the background. The balance of score, effects and dialogue seems off, and when Batman takes on some thugs at a train station, it’s noticeably lacking in any visceral excitement.

Make the switch to the 3D Mode, and there’s more room for effects, music and dialogue to breathe. Everything sounds bigger and carries more weight as the soundscape becomes taller and wider.

The sound of gunshots and sparks from a taser is depicted more convincingly, and as Batman lays into the gang, there’s more clarity and bruising detail to the hits that are amped up, compared with the Movie mode’s tame approach – and all without raising the volume.

There are height effects to note in the dojo fight scene from The Matrix Resurrections, but they don’t carry a convincing presence for an Atmos soundscape.

Playing Star Wars: The Force Awakens, the MagniFi Mini AX easily serves up a weighty sound for a soundbar of its size: it doesn’t push sound into a room, but it’s a big, dynamic, energetic and exciting performer.

The subwoofer survives its encounter with Blade Runner 2049’s dynamic track intact, with bass conveyed in a big, loud and impressively powerful manner. The sub packs plenty of heft and, arguably, too much at its default level, as it can, at times, steal the limelight from other effects.

The 3D Mode really brings to light the speaker’s dynamic abilities. As K’s spinner car lands on Sapper Morton’s farm, it’s very loud. But as soon as the spinner touches down, it becomes quiet and calm, with the soundbar seamlessly flowing through loud and quiet scenes with confidence.

Again, the MagniFi Mini AX’s sense of height effects is more generally defined than specific, but for a small soundbar, it gets the tone of sounds right.

With Terminator: Dark Fate, the car chase in Mexico has proved a problem for some soundbars in terms of protecting dialogue from the cacophony of special effects.

With the MagniFi Mini AX, dialogue always remains audible, even without VoiceAdjust. Again, the subwoofer gets a good workout: as Grace tears into Rev-9 with her shotgun, it feels like the Terminator’s body is about to rip in half from the volley of shots.

The sub sounded bass-happy when I tried Sicario, but there are controls for adjustments (I put it down to -2). Overall with Sicario, the whole system puts in a performance that sounds natural, with dialogue grounded in clarity. Fine detail is conveyed well and ambient sounds are picked up to underscore scenes, like the sound of a humdrum air conditioner while Kate and Reggie wait outside a meeting room.

What’s the MagniFi Mini AX like with broadcast TV? Again, it’s a clear and detailed performance with a 65-inch LG G2, and this time around, the Movie mode sounds bigger than the 3D one, implying it should be used with non-immersive tracks only. Watching the Women’s Euros and flicking on the VoiceAdjust boosted the commentary but also amplified the surrounding effects.

In the Music mode, there’s a decent rhythmic ability and powerful bass that gives Harry Styles’ As it Was weightiness along with a crispness that doesn’t teeter into harshness or sibilance. Music over Chromecast sounds crisper and more spacious than Bluetooth, but the difference between the two is smaller than you might expect.

Comparing it with the likes of Sonos and Denon, what you get here is effectively half of what you’d pay for those brands. You can’t argue against that in value terms.

You don’t the bass to annoy the neighbours

Powerful? Absolutely, but the sub can deliver plenty of welly with some demanding tracks, but bass levels can be adjusted if that’s an issue.

Is the Polk MagniFi Mini AX a truly immersive soundbar? Not really, but for an ultra-compact bar, it’s the most convincing attempt I’ve heard. In the right mode, it’s a big-sounding, dynamic and exciting performer, backed by a subwoofer that delivers plenty of power.

Its eARC support allows it to be fed lossless audio from suitable sources and DTS:X support is welcome – although you will want to make sure that your TV can pass through DTS soundtracks (LG TVs can’t).

This soundbar’s price puts it up against the likes of Sonos and Denon, and while they’re both better-sounding efforts, those two models don’t come with a subwoofer as part of the package. If you’re after a more cinematic performance at home, the MagniFi Mini AX is well worth checking out.

Steve May
2 weeks ago

Can you add speakers to the Polk MagniFi Mini AX?

Yes you can. The Mini AX supports the SR2 wireless speakers, which can be added to create rear/surround sound channels