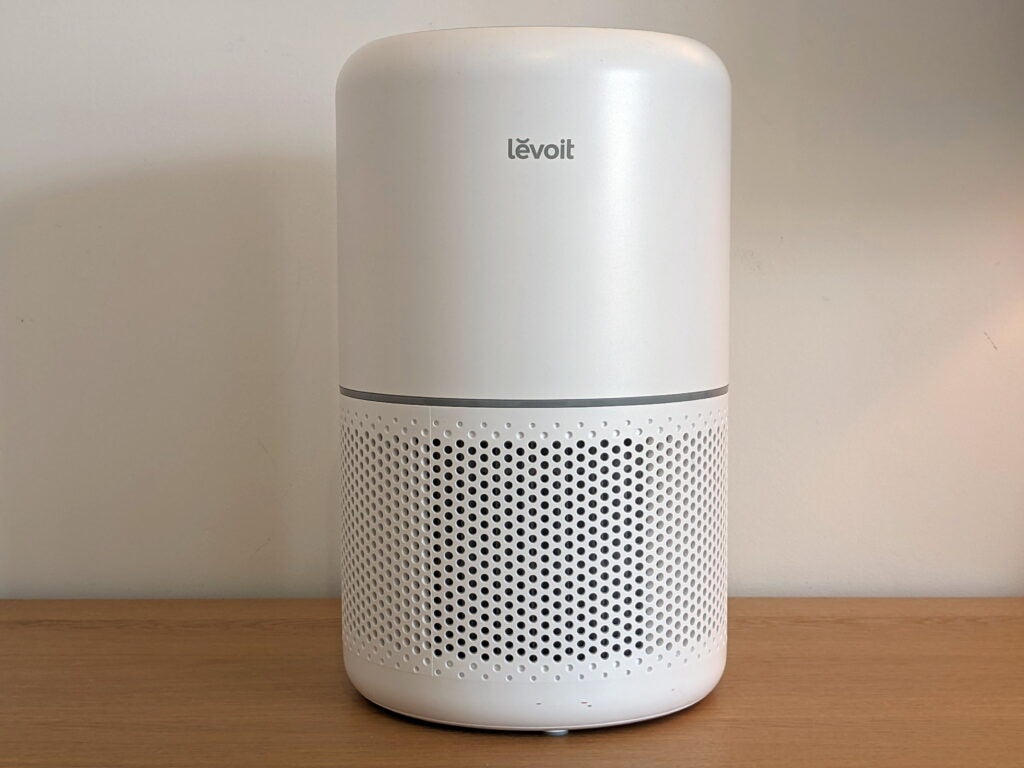 Levoit’s Core 300S combines reasonable air-purifying power with smart controls in an attractive device. Its HEPA filter can scrub particulates, pollen and VOCs from the air in medium-sized rooms, while an onboard particulates sensor helps it adjust dynamically to changing air quality. It’s an ideal purifier for people who need a little more control and performance, but opt for a purifier with more sensors if you want a purifier that will react to more allergens.

No sensors for VOCs or other contaminants

Levoit’s Core 300S air purifier is designed to clean the air in a medium sized room. It’s moderately powerful, but its neat design and low noise means it won’t intrude unless it’s working hard. Combining a HEPA filter, a PM2.5 monitor, and smart controls, it provides basic air quality information with useful features such as scheduling and voice control.

Discreet design with touch panel controlsGood appMonitors PM2.5 particulates, but not other categories of pollutant

The Core 300S is a step or two up from the kind of entry-level purifiers designed for small rooms. At 37cm tall and 22cm in diameter it’s perhaps a bit bulky for smaller bedrooms, but perfectly suited to good-sized living or dining rooms. Levoit says it has a clean air delivery rate (CADR) of 240 cubic metres per hour, meaning that on paper it’ll clean all the air in a five metre square room every 15 minutes.

The C300S is a cylindrical purifier. Its horizontally mounted fan draws air in via vents around the entire circumference of its base. There it flows through a large HEPA filter that should remove dust, pollen, mould spores, particulates, and at least 99.97% of aerosols of 0.3µm diameter. Finally, clean air blows in a diffuse pattern from the top.

Levoit says this purifier’s filter should last for around six to eight months, but our long-term test showed it’s quite possible it could go longer. After five months I’d notched up 1,400 hours of cumulative running, yet the VeSync app reported 67% filter life still remaining. You can help extend the filter life by removing it and vacuuming the outside once a month – highly recommended if your house is as dusty and cat-filled as mine. A new filter costs £30.

You can control this purifier via a large black touch panel in the centre of the air exit vent. Here you can dial up one of its three main fan settings, choose the ultra-quiet sleep mode, or set a shut down timer in hourly increments up to 12 hours.

Unlike many affordable air purifiers, the Core 300S has a sensor that detects the PM2.5 concentration in the air. These particles, which have a diameter of less than 2.5µm, are associated with an increased risk of heart and lung disease, and may cause or exacerbate respiratory conditions including asthma. There’s a blue light ring to indicate very low levels, changing to green if levels are higher but still ‘good’. The Core 300S indicates moderate particulate levels with an amber ring, switching to red when air quality is downright bad.

It’s useful to have this quick indication of particulate levels in your home, but even more useful to have this purifier’s auto mode, which steps up the fan speed when they go up. That said, the Core 300S doesn’t detect other particle categories, gases such as carbon dioxide, or volatile organic compounds. If you want comprehensive air quality monitoring, you’ll either need to pay more for a high-end smart purifier like the Dyson Purifier Hot+Cool Formaldehyde, or buy a dedicated monitoring device.

The Core 300S adds value with smart features, enabled via a connection to your Wi-Fi network. You can use the VeSync app to create daily schedules, for example, or sleep timers accurate to the minute. It also supports Alexa and the Google Assistant, so you can use simple voice commands to set the purifier running or adjust its speed.

However, while I previously had no issues adding Levoit’s Core C200 purifier to my test network, the C300 was at first reluctant to join, offering only an intermittent connection. Things improved once I disabled WPA3 encryption on my router, which had caused a similar issue on a previous test. Once I’d installed an available firmware update, the connection gave no further issues, even with WPA3 reactivated.

This glitch aside, I was impressed with VeSync, which makes it easy to update and control Levoit purifiers. It’s responsive and straightforward, using pleasing, unobtrusive animations to enhance the user experience.

Quiet in useEffective PM2.5 detection and responseNot as powerful as it looks

Double-check the figures, and the Core 300S isn’t quite as powerful as it looks. Although it’s not small, its 240m3 CADR isn’t particularly high. Indeed, its 20m2 recommended range is only three square metres higher than Levoit’s Core C200S, which costs half as much.

These numbers are only a guide, however, and the Core 300S performed fairly well in our demanding smoke test. Here we fill a small room with particulates from a smoke pellet, which sends our PM2.5 meter off the scale. Then we set the purifier to auto and time how long it takes to make the air breathable again.

The Levoit Core 300S had particulates back down to a ‘moderate’ level (below 101 micrograms per cubic metre (μg/m3)) within 12 minutes. After 14 minutes the air quality was ‘good’ (less than 51μg/m3). While that’s twice as long as the most powerful air purifier we’ve tested, it’s still a decent performance, showing that this purifier is perfectly capable of dealing with less extreme everyday demands.

Fortunately, it won’t make a lot of racket in the process. I measured a fairly noticeable 54dB with the Core 300S running flat out, but in sleep mode this fell to a whisper quiet 20dB. Place the purifier in Auto and it’ll choose this fan speed when contaminants are very low, so most of the time you’ll barely hear it. You probably won’t notice its impact on your electricity bill either, it uses just 2W in sleep mode, rising to a peak of 19W at full power.

You need a competent air purifier with smart features

This isn’t a very powerful air purifier, and it’s not suitable for people who need comprehensive air quality data

The Levoit Core 300S isn’t ideal for big rooms, and it won’t provide detailed air quality data for those managing a health condition. However, its smart features give it the edge over cheaper devices, allowing much richer control. Its PM2.5 sensor serves as a great air quality indicator, too, and allows it to offer a useful auto mode. If that’s all you need, it’s a brilliant addition to a medium-sized reception room or bedroom. If you want more, you’ll need to pay more and buy more of the more fully-featured models from our best air purifier list.

Unlike other sites, we test every air purifier we review thoroughly over an extended period of time. We use industry standard tests to compare features properly. We’ll always tell you what we find. We never, ever, accept money to review a product.

Used as our main air purifier for the review period

We test smart purifiers with their apps and we test Amazon Alexa and Google Assistant compatibility.

We time how long it takes each purifier to remove smoke from a closed room.

Best air purifiers 2022: Don’t let your allergies get the best of you

Best Fan 2022: Cooling and purifying fans to beat the heat

Will this air purifier respond automatically to pollution?

Yes and no. It has a PM2.5 particulates sensor, so in Auto mode it should react to smoke or traffic pollutants by stepping up its speed. It can’t detect other common pollutants, though – it won’t automatically speed up to deal with rising VOCs if you’re painting, for example.

Can I control the Core 300S with my voice?

Yes. You need to link the VeSync app with Amazon Alexa or Google Home, after which you can give it voice commands via a phone or other compatible device.

Do I need to replace the filter?

The Core 300S will tell you when it needs a new filter – about every 6-8 months. You can maintain the performance of your current one by vacuuming it every month to remove dust.