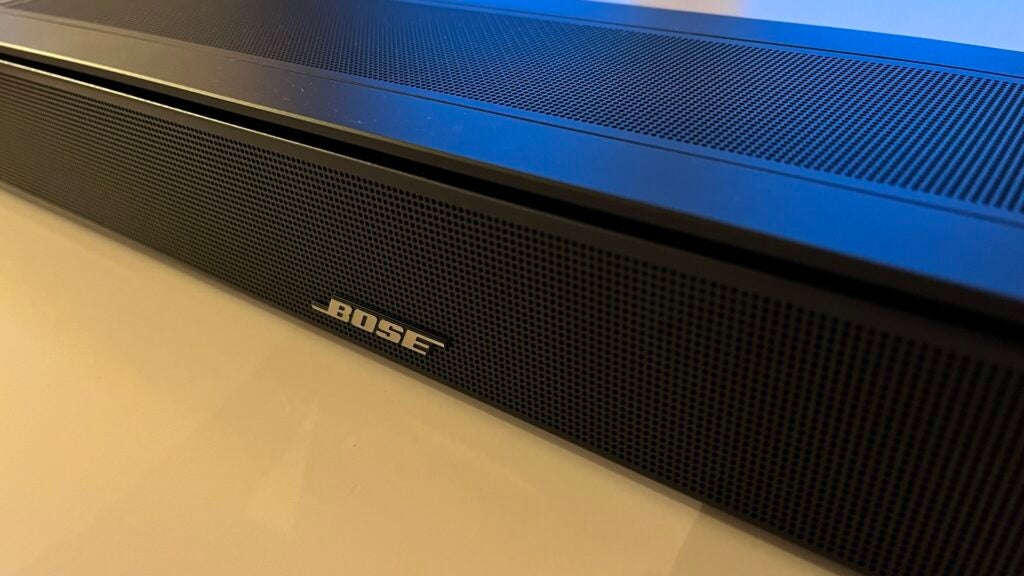 It’s not without its foibles, but the Bose Smart Soundbar 600 has plenty to recommend it – especially if all your favourite movies are in Dolby Atmos…

But with its tidy Smart Soundbar 600, Bose is trying to minimise those compromises while maximising performance. Which is very laudable and all… but is it, in fact, possible?

The Bose Smart Soundbar 600 is available, and in the United Kingdom it’s nominally £499 – although you don’t have to search far or for long to get a slightly better deal. In Bose’s home territory of the United States it goes for $499, tops, while in Australia it’s currently anywhere between AU$749 and AU$799.

You don’t need to have a deep knowledge of the consumer electronics landscape to realise that the Smart Soundbar 600 has the Sonos Beam Gen 2 firmly in its sights here: after all, the second-generation Sonos is the compact, friendly, (sort of) Dolby Atmos soundbar of choice at this sort of money. As fights go, then, Bose has waded into a tough one.

If you want a visually showy soundbar, a) what’s wrong with you? and b) look elsewhere. The Bose Smart Soundbar 600 is discreet to the point of anonymity, which I reckon is how most customers want it.

At 56 x 694 x 10mm (HxWxD) it’ll happily sit beneath smaller TVs, and at 3.1kg it’s easily wall-mountable (although Bose wants more of your money for the optional wall-bracket). And thanks to a combination of high-quality plastics and a quantity of tightly perforated metal across the front, sides and some of the top of the cabinet, the feel of the 600 is premium in the same way the look is understated.

The fact that it’s only available in black takes that particular decision out of your hands. And build quality is Bose business as usual – that’s to say it’s basically impeccable.

There are several options for controlling the Smart Soundbar 600, each of them well-implemented and useful. The soundbar ships with a little remote-control handset – it’s only credit card-sized, but it’s not one of those clicky membrane devices we all know and dislike. Instead, it’s quite tactile and features properly recessed buttons that require a positive action, and covers the majority of major functions.

You may prefer to just vocalise your requirements – so the 600 has Amazon Alexa built in. There’s a little capacitive control on top of the soundbar itself to defeat or enable the integrated mics – it’s just above an area of LED lighting that lets you know what the 600 is up to – and with the mics on, Alexa is just as responsive and helpful here as in every other application.

Fans of Google Assistant will have to have an appropriate smart speaker on a common network to use their assistant of choice.

The Bose Smart Soundbar 600 is at its most effective when it’s at its most simple. There’s a mains cable, an HDMI cable and a digital optical cable in the packaging – and all you need to do is connect the first two and you’re in business.

There’s no option to run any room-calibration software – just position the 600 in front of (or beneath) your TV (which ideally has a corresponding eARC HDMI socket) and that’s all there is to it. Fire up some content with a Dolby Atmos soundtrack and you’re living your best life.

The HDMI socket and mains input are on the rear of the cabinet, and they’re accompanied by a USB input (for servicing only), and connections allowing you to hard-wire a Bose-branded subwoofer (or bass module, as the company prefers) and IR blaster. Wireless connectivity, meanwhile, can be had in the form of dual-band Wi-Fi, Apple AirPlay 2, Bluetooth 4.2 (SBC and AAC codecs only), Chromecast built-in and Spotify Connect.

No matter how you get your audio content on board, though, it’s delivered by a five-strong complement of drivers in every circumstance – if it’s Dolby Atmos stuff then it’ll come direct, if it’s not then it’ll be delivered via Bose’s TrueSpace algorithm that seeks to create a sensation of spatial audio from content of any type.

There’s a forward-facing 32mm tweeter in the centre of the bar, and a 44 x 102mm racetrack driver at each end serving up some audio width. Behind the metal grille on the top of the cabinet are a couple of 57mm angled drivers, from which come the sensation of sonic height. There’s some low-frequency reinforcement provided by a couple of narrow bass reflex ports that exit at the rear of the cabinet.

The Bose Music app, meanwhile, takes care of pretty much everything. It’s where you can integrate the 600 into a multichannel surround-sound system using wireless Bose speakers and a subwoofer.

It’s where you can trim audio response by altering bass and treble levels, or by finessing the relative volume of the height and the centre channels. You can check for updates, set up Amazon Alexa, enable Chromecast and plenty more besides. It’s a bit of a bland look, Bose Music, but it’s about as useful and logical as these things ever get.

Big, immersive Dolby Atmos soundTonality might best be described as luxuriousDynamic and detailed

It’s not difficult to get the Smart Soundbar 600 to the point of readiness. And it’s equally easy to enjoy the sound it makes when it’s given some Dolby Atmos content to sink its teeth into.

Its facility with soundstaging is perhaps the most immediately impressive aspect of its performance. It’s a respectably large stage that’s created when you keep the physical dimensions of the 600 uppermost in your mind, and there’s enough left/right width to make effects steering both obvious and pronounced.

The forward-firing tweeter is bolstered by the two big drivers at either end and the result is a centre channel that’s positive, distinct and yet exists as part of the overall soundtrack rather than being isolated and distant.

And while those two upward-firing drivers can’t convince you that sound is actually originating from overhead, they add an undeniable sensation of height and verticality to the presentation. There’s good unity to the overall impression of soundstage here, too – soundtracks are presented as a piece, rather than as a collection of discrete and competing elements.

There’s good dynamic ability on display, too. The obvious Hollywood manipulations (the switch from hissed exposition to almighty building-levelling explosion, for example) are dispatched with no apparent effort, and the more nuanced harmonic dynamics apparent in the dialogue during Red Notice (each line more smart-arsed than the last) are given good expression too. In this respect the 600 is an effortlessly informative listen.

In fact, detail levels are pretty high across the board. Low frequencies are unexpectedly deep (given the physical size of the soundbar itself and its complement of drivers) and nicely textured, and there’s sufficient crunch and shine at the opposite end to make that shattering glass sound jagged and dangerous. In between, the midrange is positive and distinct. And the whole frequency range hangs together nicely, with no convexities or concavities from top to bottom.

What there is, though, is a mild-but-undeniable suggestion of ‘That Bose Sound’ where overall tonality is concerned. It’s not true of every single Bose product, but it most certainly is for the majority of them… you know what we’re talking about. That hint of richness, of warmth, the sonic equivalent of a slightly overstuffed pillow. In the right circumstances (lots of woodwind instruments, for example, or a basso profondovoice) it’s more than welcome; in the wrong circumstances (where speed and drive are of the essence, say) it’s a little less helpful.

The Bose TrueSpace algorithm takes over when sub-Dolby Atmos content is detected. It wants to make everything into a spatial audio spectacular – mono, stereo, 5.1, you name it. In some respects it’s pretty successful – there’s certainly a greater suggestion of height than there otherwise would be (because there wouldn’t be any at all). But at the same time the soundstage the 600 creates loses a little of its definition and positivity, meaning sound becomes (relatively speaking) diffuse and vague. An option to switch it off and simply listen in stereo (for instance) would be nice.

You have a collection of 4K UHD Blu-ray discs The Bose is happy to deal with Dolby Atmos, but it has no truck with DTS:X

As far as extracting unlikely scale of sound from a manageably sized cabinet, it is job done. And with Dolby Atmos content, the Bose is a coherent and engrossing listen. It overplays its hand somewhat with TrueSpace, though – and it’s not without accomplished and acclaimed competition (*cough* Sonos Beam Gen 2 *cough*)…

Steve May
1 month ago

Steve May
3 months ago

There’s no support for DTS, the Soundbar 600 currently only supports Dolby audio formats such as Dolby Atmos.