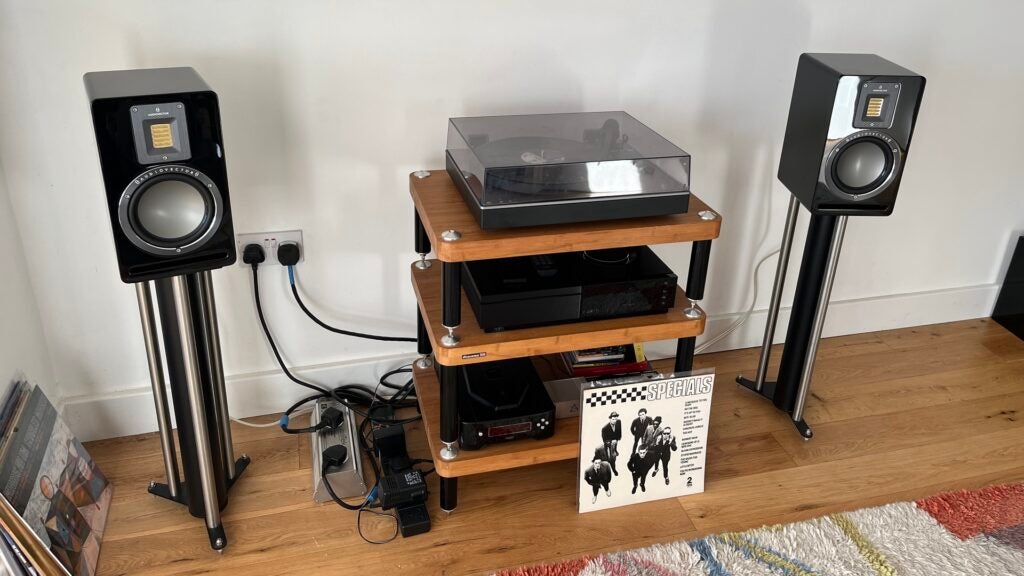 Handmade in Denmark since 1979. There are worse things for your new speakers to be, right? And it’s not as if Audiovector’s acknowledged expertise begins and ends with cabinet-making.

In the forty-plus years of its existence it’s turned out any number of highly regarded designs, some of which have represented very good value for money indeed.

But there are few areas of the passive loudspeaker market more fiercely contested than standmounters at around a grand or so. Make them by hand in Denmark by all means – but it’s going to take a bit more than that for the Audiovector QR-1 to make a significant mark…

The Audiovector QR-1 standmounting loudspeakers are on sale, and in the United Kingdom, they’ll set you back around £1150 for a pair. In the United States they’re a rather more hefty $2299 or so, while customers in Australia will have to part with AU$2299 to secure a pair. For once, then, it seems it’s American customers who are in receipt of the pointy end of the stick.

No matter where you’re shopping, though, this is not insignificant money for a pair of fairly compact loudspeakers. In the UK, for example, a very similar outlay will buy you a pair of KEF’s high-achieving LS50 Meta or (if you like your small speakers big) Mission’s retro-tastic 700. So Audiovector doesn’t exactly have the field clear…

It’s safe to say that the vast majority of loudspeakers aren’t so much designed as constructed – and the QR-1 are no different. But just because at 325 x 190 x 232mm (HxWxD) they’re an unremarkable size, and just because they look exactly as you might expect when positioned on an appropriate pair of speaker stands, that doesn’t mean Audiovector hasn’t made an effort. The QR-1 might not have been designed, especially, but they’re constructed and finished to an extremely high standard.

The cabinet is made from extensively braced HDF, flawlessly assembled and lustrously finished. The rounded edges at the top and bottom of the box somehow contrive to look rather more upmarket than those square-edged alternatives, and the lacquer applied to our piano black review sample is deep, reflective and expertly applied. It seems fairly safe to assume the dark walnut and white silk alternatives are just as gratifying in look and feel.

Each glass-blasted aluminium driver surround looks and feels equally upmarket, even if the branding on each is rather assertive. Even the exposed allen head bolts holding the surrounds in place look as sophisticated as they do functional. Audiovector provides acoustic cloth grilles that attach magnetically to the speaker’s fascia, but to my eyes at least the look is far superior with them left in the packaging.

The rear of the QR-1 cabinet features an oversized aluminium plate, onto which are attached a single pair of speaker binding posts. They’re just as nicely machined and finished as every other component here, and will accept both bare wire and a standard 4mmm banana plug.

Naturally enough, though, it’s the front of the cabinet that’s where the action is. Up top, sitting inside an aluminium plate and behind a rose gold-plated dispersion mesh, there’s an AMT high-frequency driver. This Air Motion Transformer isn’t quite the ribbon tweeter it might first appear – instead, it’s an extremely thin pleated diaphragm that forces air out from between its pleats like a member of the squeezebox family.

It’s a more elaborate high-frequency arrangement than you’ll find on many competing designs and has both superior responsiveness and low mass on its side. The mesh acts as an s-stop, keeping sibilance to a minimum – quite why it needs to be rose gold in colour is anyone’s guess.

Below here there’s a 152mm mid/bass driver that’s closely based on those fitted to Audiovector’s pricier R-series loudspeakers. It’s a continuous-profile cone constructed from two layers of aluminium sandwiching a foam/glue filling. Low distortion, significant excursion and multi-octave reach are intended to be its most noteworthy characteristics.

At very nearly the bottom of the facia there’s a narrow Q-port bass reflex slot. Audiovector prefers this arrangement to the rear-firing reflex ports more common in loudspeaker designs of this size and price, because it makes the QR-1 a little more forgiving when it comes to positioning and better controls the airflow. That’s the theory, anyway.

The crossover between the two drivers occurs at 3kHz, which is unremarkable in a two-way loudspeaker design like this. Audiovector is pleased with the crossover itself, though – it’s an extremely simple, one-component-per-driver design that’s only possible, the company says, because the drivers in question are so well-behaved.

Sensitivity of 86dB/W/m means the QR-1 are not an especially tricky load, although 4ohms nominal impedance tells a slightly different story. Basically, these speakers will appreciate a fair amount of smooth, clean power – but then they’re hardly alone in that.

Open, clean high frequenciesRapid overall soundNot quite the low-end authority of the best around

Some people like a big, beefy, barrel-chested sound when they’re listening to new loudspeakers, just as some people prefer a big, barrel-chested breed of dog. Others prefer a leaner, less muscle-bound sound – and that’s where the Audiovector QR-1 come in. If they have a canine equivalent, it’s the greyhound.

That’s not to say the sound the QR-1 deliver is particularly lacking in substance or body – it’s simply that it doesn’t sound much like Audiovector has concentrated its efforts here. What the headlines are, what defines the QR-1 in sonic terms, is their speed and manoeuvrability. Just as a bulldog will cross the line behind the greyhound, so the QR-1 will show a clean pair of heels to all brawnier competition.

A listen to Curtis Mayfield’s Move On Up illustrates the point without having to stretch this analogy to breaking point, thankfully. In the hands of the QR-1, the recording is notably rapid. Brisk congas, a virtuoso drumming performance and the clean, front-and-centre vocal all play into the Audiovector’s hands – there’s no shortage of control or authority here, but equally the speakers absolutely revel in the momentum and drive they can generate. At every point in the frequency range, they attack with straight-edged accuracy and control decay (no matter if it’s abrupt or drawn out) with similar authority.

The AMT unit does fine work creating space and air in treble sounds, and proves sensitive to even the most subtle harmonic variations that are made apparent when a drummer makes liberal use of cymbals. There’s substance to go along with the spaciousness at the top end, though – the QR-1 are never in any danger of sounding flimsy.

The crossover to the mid/bass driver doesn’t sound like it’s handled with complete confidence – there’s a slight concavity or relative lack of presence as that transition takes place. But the midrange is nevertheless handled with the same sort of confidence as the top of the frequency range. The Audiovector allow singers a lot of space in which to do their thing, and keep detail levels high enough for the most communicative of them to fully articulate their intentions. The overall soundstage the QR-1 create is well defined but not the most expansive – but at no point does Curtis Mayfield sound in any kind of danger despite the high-quality uproar going on all around him.

Even though the QR-1 don’t dig quite as deep as the best of their price- and configuration-comparable rivals, there’s still plenty to enjoy in their low-frequency response. Certainly it wants for nothing where detail is concerned, and the amount of textural information available is impressive.

A listen to something as bass-centric as Polygon Window’s Audax Powder exposes a slight lack of outright attack, a tiny tendency to shove rather than to punch – but I’m nit-picking here. By the standards of compact standmounters, the Audiovector have ample bass presence and just as many pertinent observations to make about low frequency information itself. Control is good, and as a consequence the QR-1 have little difficulty expressing rhythms or coping with even quite eccentric tempos.

You understand size isn’t the be-all and end-all: The Audiovector QR-1 sound a fair bit bigger than they are (as well as being a pleasure to listen to)

You’re expecting straightforward low-frequency wallop: Try to be satisfied with the control and detail the low frequencies enjoy instead

It’s widely acknowledged that the KEF LS50 Meta are the benchmark where loudspeakers of this sort of size, at this sort of price, are concerned – but the Audiovector QR-1 get within touching distance, which is not to be sniffed at.

They’re not quite as visually arresting and they don’t have quite the low-end presence, it’s true – but the QR-1 are easier to drive and are differently talented rather than obviously inferior. A little more certainty at the crossover point and where bass punch is concerned would make them an automatic audition.

We test every hi-fi speaker we review thoroughly over an extended period of time. We use industry-standard tests to compare features properly. We’ll always tell you what we find. We never, ever, accept money to review a product.

Are the Audiovector QR-1 bi-wirable?

The QR-1 speaker only supports a single ended speaker connection. There’s no extra binding posts for bi-wiring the speaker.